Searching the Galaxy for the Next Han Solo 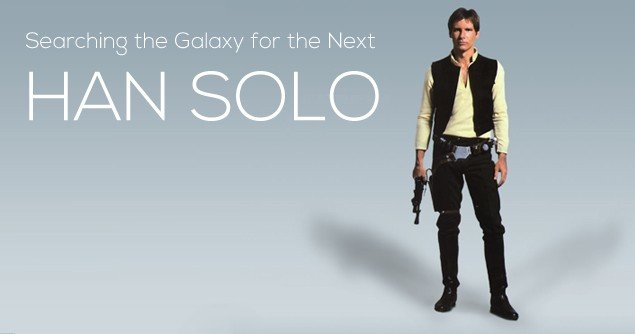 Searching the Galaxy for the Next Han Solo

In the midst of the buzz for the latest installment in the STAR WARS series, THE FORCE AWAKENS, Disney and Lucasfilm are busy searching for who will play the next Han Solo. More specifically, they are looking for an actor to play the young Han Solo in an upcoming spinoff movie.

Though the movie is not set to begin filming until early 2017, auditions are reportedly well under way. Trying to recast a role as well-loved as Solo is no easy task, and looking far and wide for the perfect actor to fill the role.

The search is being led by casting director Jeanne McCarthy and directors Phil Lord and Chris Miller. All three previously worked together on the recent JUMP STREET movies.

Han Solo’s shoes will not be easy ones to fill, particularly given how so many STAR WARS fans view Harrison Ford’s original performance as so iconic. Ford was 35 when the original A NEW HOPE premiered, but the spinoff — reportedly telling the story of Solo’s earlier years — will likely feature a younger actor.

Reportedly, more than 2,500 actors have auditioned for the role in the spinoff, which is set to be released in 2018.

“This has been the easiest movie to audition for,” one agent of an auditioning actor said. “They are seeing everyone.”

It certainly does seem that way, with reports that a number of well-known young male actors have gone out for the part. Contenders range from Dave Franco, 30, and Rami Malek, 34, to Leo Howard, 18, and Chandler Riggs, 16, according to the Hollywood Reporter.

However, according to sources the “sweet spot” is actors in their mid-20s, which would put Miles Teller, 28, Logan Lerman, 23, and Aaron Taylor-Johnson, 25 — who have all reportedly auditioned — at a good spot in the running.

The search has also been extended to actors outside the States, including Canadian actor Landon Liboiron, 23, and British stars such as Joshua Sasse, 27, and Tom Felton, 28.

This wide search, and the consideration of such recognizable faces, is a departure from THE FORCE AWAKENS director J.J. Abrams’ purposeful casting of relatively unknown actors such as Daisy Ridley and John Boyega. As the search gets narrowed down, fans will have to wait and see who becomes the infamous and charismatic Han Solo.