Stevie Wonder to Honor Andraé Crouch at the Movieguide® Awards 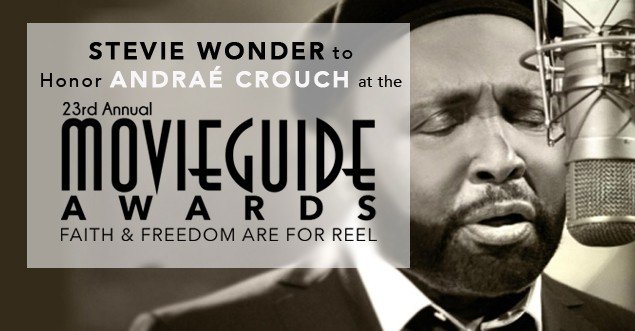 Music legend Stevie Wonder will be among those honoring Gospel music innovator, singer and songwriter Andraé Crouch at a special tribute at the 23rd Annual Movieguide® Awards airing again Monday night at 9 p.m. Pacific on the REELZChannel.

The Movieguide® Awards honors the best family-friendly movies and television shows of the previous year. It also picks the best movie for mature audiences and the $100,000 Epiphany Prizes for Most Inspiring Movie and TV program of the Year, supported by a grant from the John Templeton Foundation.

Andraé Crouch, who died Jan. 8, paved the way for American contemporary Christian music and worked with musical legends such as Elton John, Michael Jackson and Stevie Wonder, earning seven Grammy awards and a star on the Hollywood Walk of Fame along the way.

Besides Stevie Wonder, the moving tribute to Crouch on the REELZChannel will feature performances from fellow Grammy winners and nominees Donnie McClurkin, Jonathan Butler, Ledisi, and the a cappella Gospel music group Take 6.

The legacy of Andraé Crouch not only changed music, but reached into the movie industry with his Oscar nominated “Maybe God’s Trying to Tell You Something” from Steven Spielberg’s movie THE COLOR PURPLE. Crouch also arranged music for Disney’s THE LION KING in 1994.

Crouch and his sister, Sandra, were pastors at New Christ Memorial Church in San Fernando, a Los Angeles suburb.

“Andraé had a unique spiritual impact on millions of Americans,” says Dr. Ted Baehr, founder of Movieguide®. “His love for others was clearly demonstrated in his work and ministry. Andraé made the world a more beautiful place, and that’s why we’re honoring him at the Movieguide® Awards.”

To watch the full Andraé Crouch tribute by Donnie McClurkin, Ledisi, Take 6, Jonathan Butler, and Stevie Wonder, tune into the Movieguide® Awards on Monday on the REELZChannel, 9 p.m. Pacific Time.