The Story Behind SOUL SURFER: An Interview with Bethany Hamilton’s Mom, Cheri 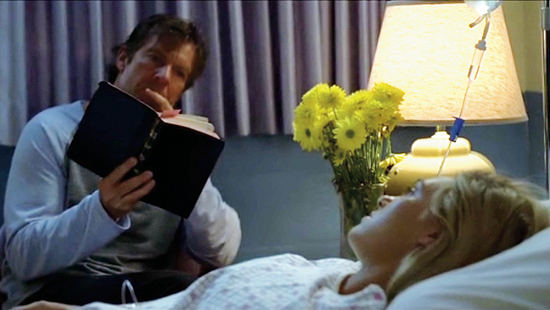 SOUL SURFER, the real life story of Bethany Hamilton who overcame tragedy after encountering a shark, created quite a stir when it was recently released into theaters. It has gone on to make more than $41.4 million at the box office, which is a big bite for a faith-based movie.

Just before it was released, the producers announced there was conflict between distributors and even among the creative personnel about whether to have a scene that involved reading the Bible.

Given the kind of things that movies graphically portray every weekend, reading the Bible does seem tame. However, the faithful prevailed and the scene stayed in.

Movieguide® had a chance to chat with Cheri Hamilton, Bethany’s mom in real life (as opposed to Helen Hunt who portrayed her in the movie). Cheri gave us the inside scoop about the Bible controversy and how it came to end up in the movie in the first place.

Cheri is a likeable mom who was a part of the seven-year journey to get the movie made. She recently had the delight of just going to the theater in her own neighborhood and watching the movie not as a mom or part of the movie’s team but just as a moviegoer. She said she was very proud and enjoyed it.

Cheri also says she was pleased and honored to have actress Helen Hunt portray her in the movie. Cheri helped the actress and team add nuances and details that lent authenticity to the movie.

Cheri reports that Dennis Quaid, who plays Bethany’s dad in the movie, had seen a documentary on TV about Bethany. He told Cheri that he cried when he watched her story. Soon after that, his agent called to see if he could be a part of SOUL SURFER.

The now infamous Bible scene came about because#mce_temp_url# of Dennis. On the hospital set, while waiting for the next shot, he opened the bedside drawer and found a Gideon Bible. He began to flip through and read. Just then, the shot was ready, and they filmed Dennis reading the Bible. It wasn’t planned but it was a great moment and was added into the film.

Later that scene was taken out and the conversation began about the need to have it in. Thankfully, the shot went back into the final film.

SOUL SURFER is still in some theaters and will make its way onto DVD soon. Be sure to check it out.

You can read the Movieguide® Review HERE.