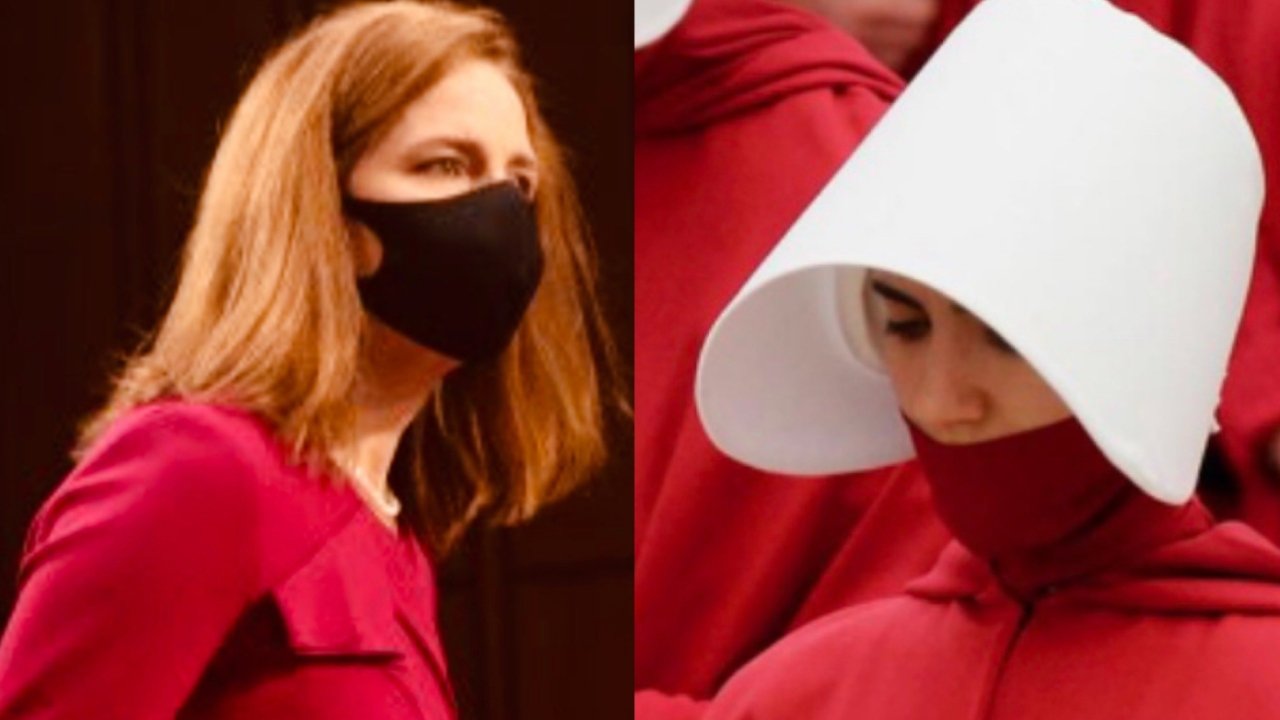 Twitter users posted about Barrett using the hashtag #HandmaidBarrett making comparisons between Barrett’s values and those of the society presented in the Hulu original series.

The Hulu series THE HANDMAID’S TALE is based on the novel of the same name about a dystopian society that has grossly misrepresented and manipulated biblical scriptures to endorse evil practices. Fertile women are considered “handmaids,” who have no value until they are pregnant. Unless a handmaid is pregnant, she is physically and emotionally abused.

Liberal filmmaker Michael Moore tweeted a picture of Barrett next to one of the show’s characters who had her mouth sewn shut for speaking out against society’s rules.

Under His eye. Blessed be the fruit. pic.twitter.com/gzRcabxqB7

It’s hard to tell what comparison Twitter users are trying to make, but it’s likely the comparison is related to Barrett’s pro-life stance as her appointment to SCOTUS has major implications on the future of Roe V. Wade.

“With the President’s new nominee, the balance of the Court is shifting to a stronger conservative majority. This is so significant because it will return the judicial branch to its rightful role in the separation of powers mandated by the Constitution, not making law or policy. Our Declaration acknowledges that our rights come from God our Creator, not our government, and it is the government’s obligation to protect religious freedom and human life at every stage. This isn’t about Amy Coney Barrett applying her faith to the law, it’s about applying the law correctly without activism. Roe v. Wade can and should be overturned because it was wrongly decided, and a conservative majority has the power and duty to do so,” Trump’s Campaign Senior Legal Adviser Jenna Ellis said in a statement to CBN News.

Barrett says she will try to be an “impartial” judge as she makes her rulings.

A copy of Barrett’s opening statement, which will be presented at Monday’s Senate judiciary Committee Hearing amid a whirlwind push from Republicans for speedy confirmation before the election, was published Sunday morning.

In the remarks, Barrett, a conservative Christian, addresses mounting concern about her ability to judge independently of her personal beliefs, called into question after a series of reports revealed she had not disclosed certain information to the Senate.

Referencing her short tenure as a judge on the 7th U.S. Circuit Court of Appeals, Barrett said: “In every case, I have carefully considered the arguments presented by the parties, discussed the issues with my colleagues on the court, and done my utmost to reach the result required by the law, whatever my own preferences may be.”

Barrett also said that when she writes an opinion, she asks herself how she would view the decision if one of her children was the party she was ruling against, and re-emphasized the influence of Justice Antonin Scalia on her approach.

Barrett’s confirmation process will continue through the end of this month.