"Stay True to Your Friends" 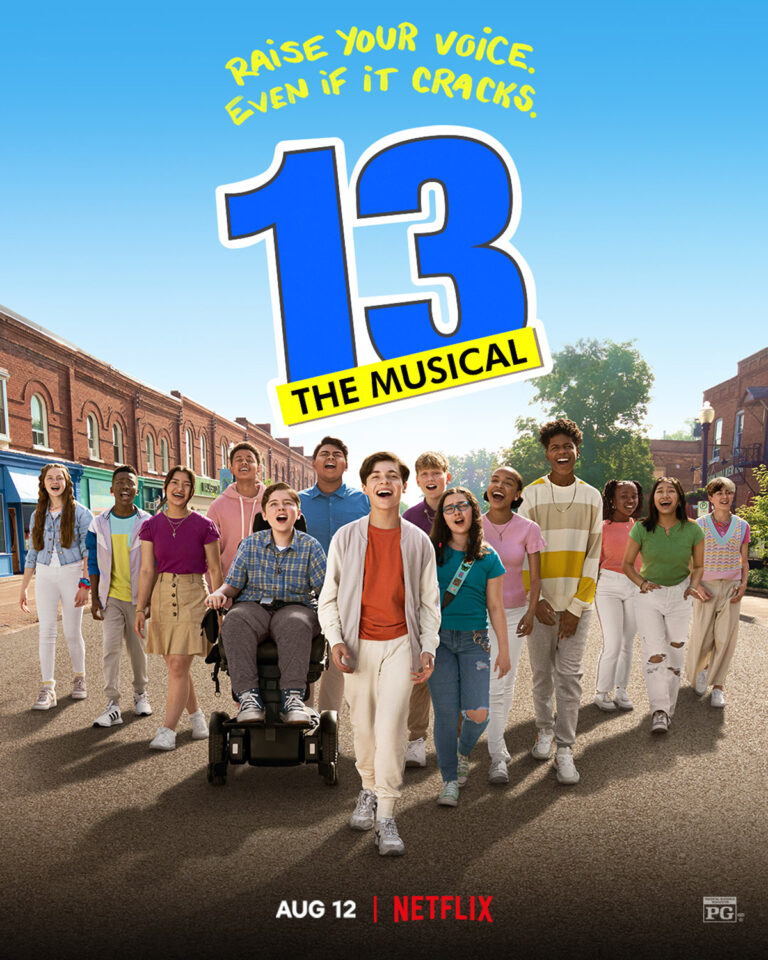 13: THE MUSICAL is a fun musical on Netflix. Evan is a 12-year-old Jewish boy. When his parents get a divorce, his mother moves them from New York City to Indiana right before his Bar Mitzva to live with her mother. Eager to make new friends, Evan meets Patrice, a quirky girl in his grade who shows him the town. The two get along well. However, when Evan sees the popular group, he wants to make friends with them instead so they will come to his Bar Mitzva. Will Evan stay be a loyal friend, or will he do what the popular group wants him to do?

13: THE MUSICAL has catchy, lively musical numbers. The movie has a moral worldview. It stresses loyalty and the main character staying rooted in his Jewish faith. There are also mentions of prayer and several scenes in a church that serves as a synagogue for Evan’s Bar Mitzvah. 13: THE MUSICAL is a fun, wholesome story about children in middle school, but it has some heavier themes about divorce and one song about kissing a girl.

(B, L, M):
Dominant Worldview and Other Worldview Content/Elements:
Light moral worldview of being a loyal friend that mentions a Bible study, has several scenes in a church, mentions prayer, with undertones of the hardships of divorce, plus the main character is Jewish and is following his faith
Foul Language:
Two light obscenities, one light profanity
Violence:
No violence
Sex:
No explicit or implicit sex scenes, but a young couple kisses
Nudity:
No nudity
Alcohol Use:
No alcohol use
Smoking and/or Drug Use and Abuse:
No smoking or drugs,
Miscellaneous Immorality:
Underage children go to an R-rated movie and lie to their parents about going, but then are caught and punished.

13: THE MUSICAL is a fun musical on Netflix about a 12-year-old Jewish boy who moves from New York City to Indiana right before his Bar Mitzva and is eager to make new friends. 13: THE MUSICAL has catchy and lively musical numbers and a moral worldview stressing friendship and loyalty, so it’s a wholesome option for the family, though it does have some heavier themes about divorce.

Evan has grown up in New York City. However, after his parents get a divorce, his mom is moving him to Indiana, where her mother lives. Evan isn’t excited to make this big move, especially with his Bar Mitzva coming up soon. After moving, Evan meets Patrice, a girl in his class who’s quirky and artsy. Patrice takes Evan all around the town and shows him how small the town is, though now it’s a little bigger with his arrival.

On Evan’s first day of school, he meets the popular kids, Lucy, Kendra and Brett. Brett and Kendra have been texting all summer, and it seems like they have a romance going, but Lucy also really likes Brett. Eager to make friends with everyone, Evan tries to help Brett woo Kendra. Meanwhile, Lucy is angry at the situation. She tells Evan that, if Brett and Kendra get together, then no one will come to Evan’s Bat Mitzva. Will Evan be able to make peace among the friends?

13: THE MUSICAL is a fun musical based on a Broadway Show, though the movie has been modified with new song additions. The songs are catchy and fun and mostly wholesome. This is a movie made for the middle school demographic and they do hit that demographic well, though people outside that demographic may not find it as entertaining.

13: THE MUSICAL has a moral worldview about staying loyal to your friends instead of getting caught up in a popularity contest. The movie stresses the main character’s Jewish faith. However, many of the events he partakes in are set in a church, because the movie jokes that there are only churches in Indiana, not synagogues. Overall, 13: THE MUSICAL is wholesome, though it does have one song about kissing a girl and some heavier themes about divorce.