"Learning to Be Your Sister’s Keeper" 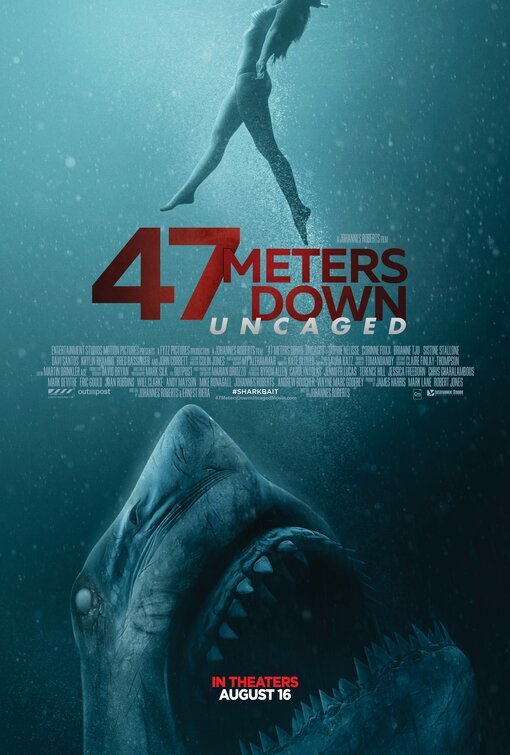 47 METERS DOWN: UNCAGED is a thriller about an underwater encounter with great white sharks. The opening introduces two estranged half-sisters, a white teenage girl named Mia and a black teenage girl named Sasha. Grant, Mia’s father and Sasha’s stepfather, has moved the girls and his wife, Sasha’s mother, to the Yucatan Peninsula in Mexico. Grant has a new underwater archeology and scuba diving business there. Mia and Sasha are forced to get along when they visit some underwater Mayan ruins with two of Sasha’s friends and run into blind sharks that have made the ruins their hunting grounds.

47 METERS DOWN: UNCAGED is a simple story that sometimes stretches credulity. However, it delivers intense thrills, with a wild ending. It also has a nice side story of two sisters learning to overcome their differences. In one exciting sequence, one of the sisters risks her life to save her sister from certain death. MOVIEGUIDE® advises extreme caution, however, for the movie’s scary, intense shark attacks and other frightening encounters with Nature. 47 METERS DOWN: UNCAGED also has some light obscenities and profanities.

(BB, C, FR, LL, VV, M):
Dominant Worldview and Other Worldview Content/Elements:
Moral, redemptive worldview involving scary shark attacks in some underwater Mayan ruins in Mexico where people have to work together to survive natural dangers, two estranged half-sisters learn to overcome their differences, one sister risks her own safety and life to save her half-sister from certain death, and one character points out a place where the Mayans used to make human sacrifices
Foul Language:
Four obscenities (two “h” words and two “a**” words), one possible Jesus profanity that seemed garbled so it was hard to tell, 14 light profanities (mostly OMG), one crap vulgarity, and four teenage girls give the finger to a group of female teenage bullies
Violence:
Strong intense violence includes several deadly shark attacks and attempted shark attacks, several people die from shark attacks, teenage girl tries to fight back against a couple sharks biting people and trying to kill them, scuba divers explore scary underground Mayan ruins, a pillar and a ceiling fall and trap people in the ruins, two girls brave really strong current near ocean exit in the underwater ruins, people get trapped in narrow underwater passages, one character drowns, a teenage girl dressed in her school clothes struggles to climb out of the school pool after falling in
Sex:
No sexual content
Nudity:
No nudity but two or three girls dress down to their bras and panties to swim in a large natural pool in the jungle (one girl is already wearing a half T-shirt over her bra so she keeps the T-shirt on)
Alcohol Use:
No alcohol use
Smoking and/or Drug Use and Abuse:
No smoking or drugs; and,
Miscellaneous Immorality:
A teenage girl dressed in her school clothes has been pushed into the school pool by another girl who bullies her, and other students laugh at her predicament, including her own half-sister, and teenage girl scuba dives into dangerous underwater Mayan ruins even though she knows her father would not approve.

47 METERS DOWN: UNCAGED is a thriller about four American high school students living in the Yucatan Peninsula of Mexico, including two estranged sisters, who encounter great white sharks while exploring an underwater cave filled with ancient Mayan ruins. 47 METERS DOWN: UNCAGED sometimes stretches credulity, but it delivers intense thrills and shocks, with a wild but exciting ending and a nice side story of two sisters overcoming their differences.

The opening introduces viewers to two half-sisters, a white teenage girl named Mia and a black teenage girl named Sasha. Grant, Mia’s father and Sasha’s stepfather, has moved the girls and his wife, Sasha’s mother, to the Yucatan Peninsula in Mexico. Grant has a new underwater archeology and scuba diving business there. An experienced scuba diver, Grant and his company are exploring an underwater system of caves filled with ancient Mayan ruins. The ruins include tunnels and catacombs where the Mayans, who had a system of human sacrifice, sometimes hid from the Spanish conquistadores when the ruins were above water hundreds of years ago. The human sacrifices in Mayan and Aztec culture reminded the Christian conquistadores of the human sacrifices the Hebrews under Joshua encountered in the pagan cities of the Holy Land, as reported by the Bible. Consequently, the Spanish soldiers, who had just come from a 700-year guerilla war against Muslim invaders of Spain, which ended in 1492, had no problem waging war against the leaders of these two decadent pagan cultures.

Sadly, no one at the all-girls, English-speaking school they attend seems to like Mia. Also, Mia gets no sympathy from her half-sister, Sasha, and Sasha’s two friends, Alexa and Nicole, even when a female bully at the school pushes Mia into the school’s outdoor pool. The next day is Saturday, so Mia and Sasha’s parents decide to force the girls to go on a ride on a glass-bottom boat where people can view sharks in the ocean. The parents hope the time together will help heal the rift between the two half-sisters. Meanwhile, their father has to spend the day working underwater at the Mayan ruins with his two teenage employees, Ben and Carl.

However, when Mia and Sasha get to the pier where the shark attraction boat takes off, Alexa and Nicole show up. They invite Sasha to spend the day with them. Sasha has enough care for her sister to get her to come along. Mia, Alexa and Nicole reluctantly agree, and Mia starts to like spending time with everyone as Alexa drives them to a secret hidden place in the jungle near the ocean. They have to hike to the place and, when they get there, the place turns out to be a large natural pool of water linked to the underground Mayan ruins.

As destiny would have it, Ben, one of the teenage employees working for Mia and Sasha’s father, took Alexa scuba diving to the first cave in the ruins. A diving platform in the natural pool has scuba gear in it. So, Alexa proposes that the four girls explore the first cave and return. Mia, who’s gone diving many times in past with her father, reluctantly agrees. Her father’s working in the caves, but in another location, so he’ll be none the wiser.

Of course, the caves contain some great white sharks with no eyes but who can hunt by smell and sound. The four girls reach the caves, but one of the sharks suddenly appears and scares Nicole. Nicole and the shark bump into one of the sides of the ancient ruins, and a large pillar falls down.

Happily, Ben suddenly appears with a guideline back to where Mia and Sasha’s father is working. However, a shark suddenly attacks and kills Ben. This encounter collapses a ceiling and blocks the girls’ path back to the natural water pool. So, now the girls have no choice but to follow Ben’s guideline back to Mia and Sasha’s father. More sharks are sure to appear, however. Also, the girls have only about 40 minutes of air left. Will anyone make it out of the underwater ruins alive?

47 METERS DOWN: UNCAGED is a simple story that sometimes stretches credulity. However, it delivers intense thrills and shocks, with a wild ending. It also has a nice side story of two sisters overcoming their differences and having each other’s back. Thus, the severe test that Mia and Sasha undergo in the story requires them both to start looking out for one another. Eventually, Mia must risk her own life to save Sasha from certain death.

47 METERS DOWN: UNCAGED warrants extreme caution because of its scary shark violence. Several people lose their lives during encounters with the sharks, sometimes in shocking, sudden fashion. Also, at one point the survivors have to navigate incredibly strong currents as they near the place where the Mayan ruins exit into the ocean. Though the movie only contains several light obscenities, there are about a dozen light profanities. So, MOVIEGUIDE® advises extreme caution.