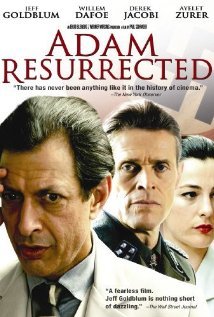 ADAM RESURRECTED is the story of a Holocaust survivor who must come to grips with his problems. Adam is a famous entertainer who, when sent to the concentration camps, is forced to be Commandant Klein’s “dog.” As humiliation, Adam is forced to walk on all fours and entertain Klein. After the war, the public misunderstands Adam’s story that he was the Nazi “pet.” Even his surviving daughter dies in shame over her father. This sends Adam insane, and he is put into an experimental treatment facility for Holocaust survivors, where he meets an abused boy who thinks he’s a dog. Together, they begin to help each other recover.

This complex movie is both serious and comical. The movie’s message is clearly anti-God, however. The filmmakers blame God for the Holocaust. In the end, Adam is in the desert and a burning bush appears as it did for Moses. However, instead of God appearing, the dead Commandant Klein appears and tries to get Adam to commit suicide. Throughout the story, God is often compared to the Nazis. Ultimately, the movie’s humanist, anti-biblical attacks on God are what make it abhorrent.

ADAM RESURRECTED is the story of Adam, a mentally ill Holocaust survivor who must come to grips with his own problems while helping an abused boy who thinks he’s a dog.

Before the Holocaust, Adam was a famous magician, clown and mind reader. When he is sent to the concentration camps, Adam is forced to be Commandant Klein’s “dog.” As acts of humiliation, Adam must walk on all fours and entertain Klein. Meanwhile Adam’s wife and youngest daughter are killed in the camp.

After the war, Adam’s story of what happened in the camp is told and he is shunned throughout Germany since he was the “pet” for the Nazi leader. The public misunderstands that Adam was actually treated terribly. Adam is finally able to locate his oldest daughter, but only after she has died when hearing about what her father had done.

Adam goes insane and is taken to an experimental treatment facility outside Tel Aviv for Holocaust survivors. There, Adam becomes the “clown” for the other patients. However, a young boy is brought into the facility, and Adam immediately “sniffs him out.” The young boy was abused and locked in a basement and now believes he is a dog.

Adam is able to help the young boy, whom he names David, to become more like a human. However, Adam is conflicted in David’s recovery because it brings up all the memories of when he was forced to pretend to be a dog.

In the end, Adam is able to have some degree of release from his troubles and leaves the facility.

This complex and disturbing movie walks a fine line between being both serious and comical. The plot has ridiculous elements that are only redeemed because the majority of the characters are mentally ill.

The movie drags quite a bit and borders on tedious at times, but Jeff Goldblum gives a good performance and William Dafoe as the villainous Klein is very creepy. The story bounces between the current story of Adam in the facility with David and flashbacks to his time during and immediately after the War.

The movie’s message is clearly anti-God. The filmmakers have gone out of their way to blame God for the Holocaust. A supporting character has Adam type out his eulogy because he plans to die soon so he can go to heaven and make God answer to him as to why he caused such evil on earth. The character says the Jews were saved from Haman (a reference to the book of Esther) only to be tossed to Hitler.

In the end, Adam is in the desert and a burning bush appears, much like it did for Moses. However, instead of God appearing, the dead Commandant Klein appears and tries to get Adam to commit suicide. Throughout the story, God is often compared to the Nazis.

Adam names the boy who thinks he’s a dog “David” after King David, the king of the dogs (instead of saying King of the Jews).

The only redeeming quality is that the young boy finally walks upright and calls out to Adam just when Adam is about to kill himself. This love and bond between them convinces him to keep living and is the turning point for both of them.

ADAM RESURRECTED has scenes of depraved sexual situations as well as troubling images of the concentration camp and seeing the young boy live as a dog. The worst aspect is the movie’s humanist, anti-biblical worldview that presents God as a monster comparable to an evil Nazi and life as being filled with pain and tragedy with only humanist answers.