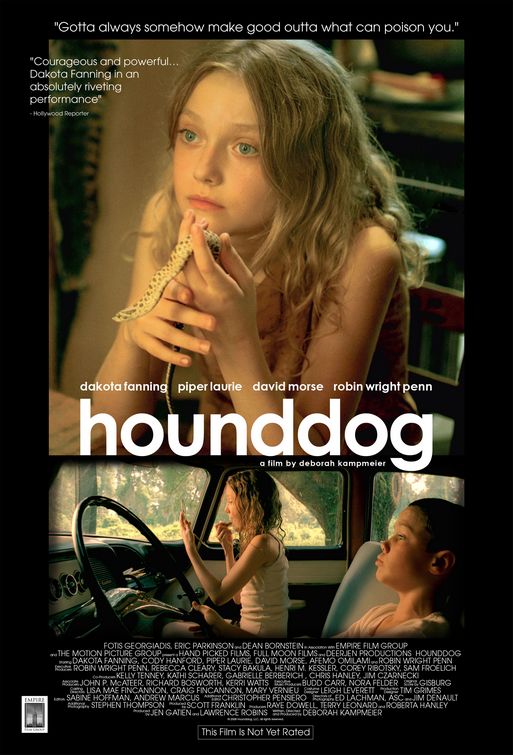 The controversial movie HOUNDDOG is about Lewellen, a poor, pre-teenage girl who is brutally raped. Wanting to escape living with her mentally deranged father and repressive Christian grandmother, she finds solace in the music of Elvis and dreams of one day singing with him. However, she is raped while dancing provocatively. Instead of genuine help, an adult friend tries to help her with the occult practice of “snake medicine.” Ultimately, she allows her father to be killed, which frees her to go live with her mother.

HOUNDDOG contains scores of illicit and negative sexual and violent content. The father is shown having sexual relations often, Lewellen has a male friend pull down in his pants in exchange for a kiss, and other provocative material. None of that compares to the disgusting onscreen rape of the young girl. After the rape, Lewellen wakes up the next day to find snakes in her bed, which is explained to be the “spirits” working to heal her. In addition, there are negative Christian characters. HOUNDDOG is clearly an abhorrent movie on many levels. It also is poorly scripted and boring, with an annoying musical score.

(AbAbAb, PaPaPa, RoRoRo, OOO, FeFeFe, L, VVV, SSS, NN, AA, D, MMM) Anti-Christian worldview with negative portrayals of Christian characters mixed with a very strong pagan worldview with a very strong Romantic philosophy, using occult practices mixed with very strong feminist elements where Christianity stifles “innocent” female sexual exploration and “snake medicine” will heal a young rape victim; three obscenities and no profanities; very strong violence includes family dog is shot, the father’s companion comes out of the father’s bedroom with facial bruises, father is struck by lightning, girl’s wrists are whipped for stealing money to buy her father medicine, brutal rape of young girl, and young girl by her inaction allows her father to be killed by rattlesnake; very strong sexual content such as young girl is raped after she dances naked in front of a teenage boy, young girl “bumps and grinds” in dance, young girl convinces young boy to pull down his pants in exchange for a kiss, she says she has made the same deal with other boys, young girls takes delight in provocative dancing to the Elvis tune “Hounddog,” one of girl’s father’s sexual encounters is shown through a window with obvious physical activity, young girl in tub gets lecture from grandmother about staying a “good” child, she stands up in tub while her grandmother examines her; full rear male nudity when girl talks a young male friend into pulling down his pants in exchange for a kiss; girl serves father a beer and takes a drink herself; smoking; and, girl gets sick and leaves church service where the preacher calls rock “the devil’s music,” after being raped girl sleeps in bed while several snakes come in her window and join her in the bed as part of movie’s occult content, man gives girl lecture on superstitious “snake medicine,” girl calls black man the “n” word and he calls her the same, terrible parental role models, injustice, and dishonesty.

The controversial movie HOUNDDOG is the story of a poor 1950s pre-teenage Alabama girl being raped.

HOUNDDOG stars pre-teenage actress Dakota Fanning as Lewellen, a little girl who likes snakes and loves Elvis. She hopes to sing for him some day, thinking he will see her talent and take her away from the horrid conditions in which she lives. Her mother left, her father is an abusive womanizer, and the grandmother she lives with is a repressive Christian. Grandma is determined to see that Lewellen doesn’t grow up to have sexual relations out of wedlock like her disowned daughter did. Lewellen lives in a shanty with tall grass and rusting cars in the yard. She gets beers for her father and his girlfriend, taking a sip herself without criticism.

The movie opens with Lewellen talking a young male friend into pulling down his pants in exchange for a kiss. It goes downhill from there. Lewellen takes pleasure in, and gets compliments for, impersonating Elvis singing Hounddog, complete with bumps and grinds. On one occasion, she does so in a most provocative fashion for a milk delivery boy. Later, this older boy offers her a ticket to see Elvis if she will do the same dance naked. She complies and is brutally raped. Her young male friend stands nearby watching.

The “healing process” is led by an old black musician friend who learns of the rape and comes to get Lewellen. Upon finding her sleeping in her bed crawling with snakes, he declares that the spirits are at work healing her. The snakes are clearly obeying some kind of occult mysticism. He tells her that snake medicine will help her “make good outta what can poison ya.” With his encouragement, she begins to sing Hounddog in her own style. At the end of the movie, Lewellen purposely does not take some actions that would have prevented her father from being bitten and killed by a snake.

In the HOUNDDOG press kit, writer/producer/director Deborah Kampmeier wrote, “Why is a young girl, like Lewellen, in the blossoming of her body, her spirit and her sexuality seen as ‘asking for it’ when she is simply and innocently experiencing and relishing the aliveness of her being, the life force pulsing through her body, celebrating the power and creative force of her sexuality that is her birthright?”

As bad as the rape of a little girl is, the “healing process” presented in the movie, which includes sleeping in a bed crawling with snakes, is like a second rape. Christianity is presented as part of the problem rather than the real solution.

What Kampmeier fails to see is that the “life force” she would celebrate is often self-destructive, perverted human nature. The same “life force” coursed through the veins of the rapist. As Christians, we know that the cure for an epidemic of rape is not the further celebration of lust. It is Jesus Christ setting free those who are captive to lust and those who find pleasure in causing others to lust. A nation set free to explore perversion will be a society where it’s unsafe to let your children out of your site. A nation set free by Jesus Christ will be a safe place for children to enjoy their childhood. The fact that this anti-Christian, satanic movie seems to have a very strong feminist perspective is revealing. It shows the demonic nature of radical feminism, which is one of the worst ideologies to be inflicted on modern civilization. Such radical feminism is not only corrupting women, it is corrupting men.

HOUNDDOG purports to be a movie that calls attention to the problem of rape but its “solution” only invites more rape, fear, disease, poverty and destruction. The acting may be seen as technically good, but the actors never question or challenge the revolting material they are required to perform. The script is poorly written, full of unpleasant characters with little redeeming value. The execution of the script results in a pretty boring, often silly and disgusting movie with music that’s frequently annoying.

MOVIEGUIDE® Publications strongly condemns HOUNDDOG. Instead of supporting vile movies like this, we urge you to help MOVIEGUIDE® and the Christian Film & Television Commission® ministry redeem the values of Hollywood.