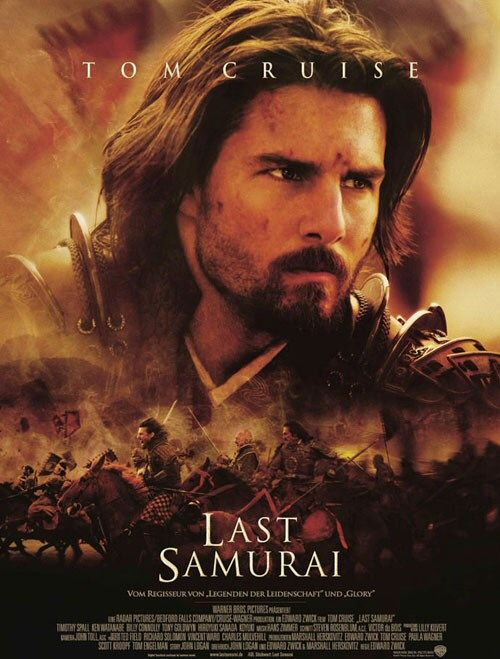 Set in 1876, THE LAST SAMURAI stars Tom Cruise as traitor Captain Nathan Algren, a Union hero from the Civil War, who sides with rebellious Samurai soldiers against the modernization of feudal Japan. Aside from its anti-Americanism, THE LAST SAMURAI contains some positive moral elements marred by a few obscenities, the brutalities of war, and false religious and philosophical notions.

(PaPa, FRFR, RHRH, B, PP, AP, Acap, L, VVV, N, AA, D, M) Mixed pagan worldview about an American traitor with strong false religious elements such as light references to Buddhism, very strong references to Japanese samurai lifestyle (including suicide practices), some Japanese call their Emperor a god, false religious value of works righteousness where soldier guilty of participating in massacre assuages his guilt by adopting a more honorable lifestyle, and some strong moral virtues such as honor, integrity, duty, personal dignity, self-control, and tradition, with anti-Americanism and anti-capitalism, but other values are uplifted, such as tradition although the movie is revisionist history; five obscenities and profanities; very strong war violence, with some blood, includes ranks of soldiers fire guns, brutal machine gun fire at men on horseback armed only with swords but slightly protected by battle armor, sword fighting with whacking at enemy bodies and necks and heads, canons fire, arrows pierce many men, ninjas attack, throats slit, throwing weapons, men shot numerous times in several scenes, beheading, horses fall, man slice from top of head down, and Japanese soldiers commit suicide after defeat; no sex scenes, but woman lovingly puts body armor on her romantic interest, the hero, and they kiss one another softly before he goes to war, probably to die; upper male nudity; alcohol use and drunkenness, smoking; and, racism rebuked.

THE LAST SAMURAI allows the exquisite scenery and strong supporting cast to tell the story that surrounds the Tom Cruise character, Captain Nathan Algren, an American who turns traitor to the Army who employs him. Although the Cruise character does not directly fight against the American army, he does stand against the Americanization of Japan and the American superiors who hired him to organize a Japanese Army. His stand ultimately stops a treaty between the United States of America and Japan which causes Japan and American to be pitted against each other for the next fifty years until the end of World War II.

The movie picks up in 1876, ten years after the Civil War, and the subsequent wars putting down the Indian tribes on the plains. Algren is a decorated Union hero from both wars, and a hopeless alcoholic as he tries to drown the memories of an atrocity on some innocent Indians, including women and children, performed on behalf of his superior officer. His “work” is to use his quasi-celebrity status as a carnival spokesman for Winchester rifles. When he appears staggering onstage and strays from his speech, commenting on the horrors of war and firing dangerously with the Winchester, he is summarily fired.

In the audience is former Army Sergeant Gant, a friend, who tells him about a job possibility. Upon entering an upscale restaurant and an adjoining room, he meets a high-level Japanese politician and his former superior, Colonel Bagley (played by Tony Goldwyn), who offer him a job as a military advisor to the Japanese Emperor. Algren loathes and despises Bagley for having served as Bagley’s subordinate during the massacre. Having no other options, however, he negotiates to take the job with Sergeant Gant to train the Japanese to put down a rebellion of Samurai.

The young and confused Emperor wants to modernize Japan with the help of greedy Ujio. The Samurai, led by a renowned soldier named Katsumoto, is presented in the movie as a traditional, honor-based society of warriors that is resisting the fundamental changes to the Japanese lifestyle. In real history, the Samurai had become a corrupt class of warriors who were terrorizing the Japanese people. For a better portrait of the reality of the Samurai, rent Akira Kurosawa’s masterpiece THE SEVEN SAMURAI although that movie still paints a rosier picture than real life.

Algren and the cadre of Americans are hired to teach modern firepower tactics to the Emperor’s army. Unfortunately for Algren and Gant, Ujio and Colonel Bagley order the half-trained troops into combat prematurely, against the Samurai. In the heat of battle, the peasant-soldiers crumble under the fierceness of the Samurai’s attack, and are slaughtered. Sergeant Gant fights and dies, Algren kills several men, then is surrounded by several warriors, managing to hold them off with a spear. On the spear is a banner with a painted tiger. As one fierce looking warrior in red armor closes in to kill him, Algren dodges the deathblow, and rams the spear into the neck of the warrior. By this point, Katsumoto (played by Ken Watanabe in an excellent performance) intervenes, having seen a vision of a trapped tiger, and the Samurai take Algren prisoner.

What follows is a “Stockholm syndrome” story of Algren adopting the perspective of his captors by changing from a man haunted by dishonor and his past, to a man who sees the beauty and honor of the communal (almost communistic) Samurai lifestyle. Initially mistrusted and mistrusting, Algren learns from Katsumoto, and the family with whom he is billeted, the meaning of honor and life from the bushido perspective which was exposed so effectively as ruthless and cruel in TO END ALL WARS.

As he is allowed to move about the village, Algren painfully learns how to train with the Samurai sword. Eventually, he proves himself to his captors, and, after a battle with attacking Ninjas, is accepted as an equal. Now, he must chose between the mysterious, enchanting glamorized life of the Samurai, and the life he has known as an American soldier. In this movie which would have made the Taliban traitor, John Walker Lindh, proud, Algren chooses to betray the army who employed him.

Warner Bros. is worried about the movie because THE LAST SAMURAI is not a classic wide-screen movie since it incorporates extensive Japanese dialogue with subtitles and has some very static scenes. Director Edward Zwick of GLORY and LEGENDS OF THE FALL, who co-wrote the screenplay with the talented John Logan, handles the story with great skill, and Cinematographer John Toll (BRAVEHEART) renders the vistas and natural lighting beautifully. The Los Angles Times notes that Harvard-trained Zwick ” sees nothing wrong with making films that try to change the world.”

Marring THE LAST SAMURAI is a small amount of foul language and the fact that this is a WAR movie with combat death presented in graphic, sword wielding, horror. Thus, it is an entertaining movie that’s better suited for older teenagers and adults. The Buddhist religion is referred to in word and deed with ancestor worship obliquely endorsed. There is also a very romantic scene that involves no sex or nudity! The only dangers to non-educated audiences is the Samurai code which puts “honor” so high that suicidal death is preferable to dishonor. Unquestioning obedience to the point of death is expected. The widow of a fallen soldier is supposed to be comforted, raising two small boys alone, by the fact that her husband died “a good death.” A major character (not be revealed for the sake of possible moviegoers), commits seppuku, and it is supposed to be a touching moment. During World War II, thousands of Japanese soldiers took their own lives rather than be captured. They also slaughtered thousands of allied prisoners because they believe that anyone who surrendered was without honor, and therefore not worthy of good treatment or life.

Thus, although one character tells Algren “God speed” before the movie’s climactic battle, and although the movie uplifts such values as honor, integrity, and sacrifice, THE LAST SAMURAI has some serious worldview problems. In addition to the pagan samurai bushido code, the premise of the movie strongly suggests that Algren can redeem himself from his sins by working his way toward redemption. Of course, the New Testament strongly condemns this false religion of works righteousness. True salvation and redemption can only be found through faith in Jesus Christ. That said, it is important to also note that, in the story, Algren also redeems himself by looking inward, not by looking outward. The New Testament also has much to say about the fact the problem of sin and the problem of evil is an inward problem, a problem of one’s heart, mind, soul, and spirit. Thus, even though it has a false theology, Christian evangelists can use THE LAST SAMURAI as a theological lesson on the true nature of faith and redemption and on the spiritual and moral need of every person for making a true change from the inside out through the power of God’s Grace freely available when we accept Jesus Christ as Lord and Savior.

Many moviegoers may enjoy THE LAST SAMURAI as a masterfully crafted action movie, if they can handle some of the bloodletting. Mature moviegoers may well appreciate the respect for family, honor, self-control, bravery, duty, and discipline of the ancient Samurais, without falling for the false aspects of their teachings which, after all, eventually led to the brutality of the buddhist fascism that Japan inflicted on so many Chinese, Korean, Burmese, and American lives during World War II.

Regrettably, however, the movie makes a hero out of a traitor and makes 19th Century America the villain. Thus, in some ways, Tom Cruise’s role resembles his Ron Kovic role in THE Anti-American BORN ON THE FOURTH OF JULY. Just as Colonel Bagley asks Algren in the movie when he sees that Algren has become a traitor, one might as Cruise and Zwick, why do you hate your own people?

SUMMARY: Set in 1876, THE LAST SAMURAI stars Tom Cruise as traitor Captain Nathan Algren, a Union hero from the Civil War, who sides with rebellious Samurai soldiers against the modernization of feudal Japan. Aside from its anti-Americanism, THE LAST SAMURAI contains some positive moral elements marred by a few obscenities, the brutalities of war, and false religious and philosophical notions.