A BRIDESMAID IN LOVE 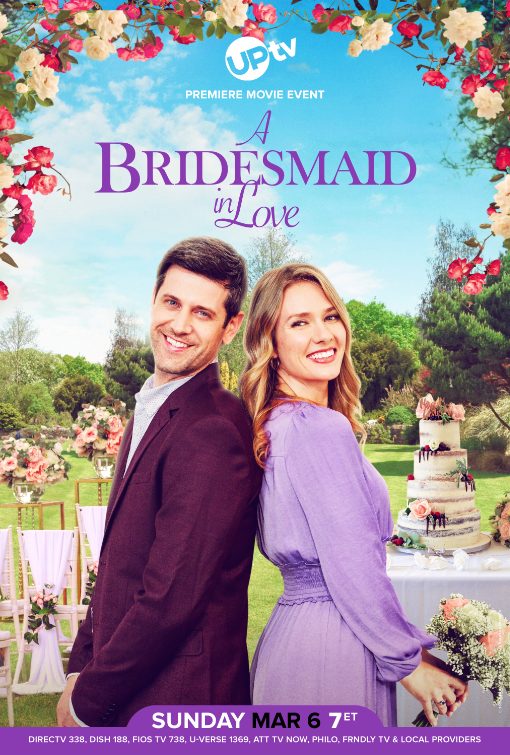 A BRIDESMAID IN LOVE is a romance on UPtv. Cate is a professional bridesmaid and wedding columnist. Matt Davenport works in finance in New York. They’re childhood friends and reconnect when Cate helps with Matt’s sister’s wedding. Meanwhile, Cate and her boyfriend take a break from one another. Matt wrestles with starting a new career path. Cate wonders about her career. Will they find true love pursuing their dreams and helping out with the sister’s wedding?

A BRIDESMAID IN LOVE has solid acting by the leads, some cute moments and a well-structured script. The pacing is smooth though predictable, but the movie has good jeopardy and conflict, and there’s resolution at the right moments. The movie’s content is mostly clean. However, it has a strong Romantic worldview with a New Age, occult subplot. For example, the characters are motivated by true love, and the heroine magically connects with her future spouse by trying on a wedding dress. A BRIDESMAID IN LOVE has some moral elements stressing friendship in marriage, helping other people and capitalist ideals. MOVIEGUIDE® advises extreme caution for older children.

(RoRo, FR, O, BB, CapCap, A, M):
Dominant Worldview and Other Worldview Content/Elements:
Strong Romantic worldview where characters are motivated to find true love, long to find the magic in weddings and dream about a perfect future with their one true love, combined with a New Age, occult subplot about magically finding your true love and future spouse by trying on a wedding dress you like, plus some strong moral elements that stress friendship in marriage (the movie says true love and marriage start with friendship), helping other people and promoting the capitalist system
Foul Language:
No foul language
Violence:
No violence
Sex:
No sex scenes or lewd content (an unmarried couple kisses)
Nudity:
No nudity
Alcohol Use:
Some social drinking
Smoking and/or Drug Use and Abuse:
No smoking or drugs; and,
Miscellaneous Immorality:
The bride’s mother officiates her daughter’s wedding, the wedding ceremony is secular and kind of silly, and there’s a white lie to get out of seeing someone.

A BRIDESMAID IN LOVE is a romance movie on UPtv about a professional bridesmaid who breaks up with her boyfriend and reconnects with an old friend while she helps his sister with her wedding. A BRIDESMAID IN LOVE stresses friendship and helping other people and has solid acting by the leads, a well-structured story, some cute moments, and smooth pacing, but it has a strong Romantic worldview with a light New Age, occult subplot about magically finding your true love and future spouse.

The movie opens in a yoga class. Cate James and her pal, Lexi, talk about a friend of theirs named Maxine Davenport, who’s getting married. Cate mentions she’d love to help make Maxine’s big day special. Cate is a professional bridesmaid. She steps in for brides who need extra help depending on their circumstances, and all her earnings go to an afterschool art program.

Cate complains about her boyfriend. Lexi mentions that she read an article about a woman who tried on a wedding dress and then met her future spouse the next day. Lexi makes Cate promise that, if she sees a dress she likes, she tries it on in hopes that Ben will know to propose. Shortly after, Cate finds a dress to try. From outside the shop, a man notices Cate inside the shop and enters the shop to say hello. His name is Matt Davenport, and he’s an old friend of Cate’s and Maxine’s brother.

Matt is surprised to find out Cate isn’t engaged, but she’s trying on a wedding gown. After he leaves, Cate is totally embarrassed.

Cate asks her grandfather, who owns a coffee shop in town, about the meaning of true love. He tells her the secret to a happy marriage is friendship.

Meanwhile, Matt is helping a friend with a new art gallery. Matt also came into town to help with Maxine’s wedding. He’s recently gone through a breakup and says he’ll will know when he meets the right person for him.

Cate and Matt continue to have encounters while they help with all the details for Maxine’s wedding. According to Matt’s family, Matt used to have a crush on Cate when they were younger. All the while, Cate isn’t sure Ben is the right person for her long-term. Ben is very focused on work, forgets their relationship anniversary and doesn’t even consider Cate to be his best friend. Because of all this, Cate and Ben take a break from their relationship.

Cate and Matt strike up a deal with each other while helping with the wedding. Matt isn’t content with his job in finance, and Cate is upset she’s put a novel she wants to write on the backburner. They agree with one another to do something they love. Will they find true love in the process of pursuing their dreams?

A BRIDESMAID IN LOVE follows the customary TV movie pacing. Points of jeopardy and conflict move the plot along, and there’s resolution at the right moments. The movie also has solid acting by the leads, some cute moments and creative montage scenes.

The content in A BRIDESMAID IN LOVE is mostly clean. The movie has no foul language, lewd content or nudity. However, it has a strong Romantic worldview where characters are motivated by romantic love. They long to find the magic in weddings and dream about a prefect future with their one true love. The wedding in the movie takes place outside, not at a church. Also, it’s officiated by the bride’s mother in a rather secular, non-religious manner. Furthermore, the movie has a New Age, occult subplot where the heroine “manifests” her future spouse by trying on a wedding dress she likes.

In contrast to all this, A BRIDESMAID IN LOVE has some strong moral elements stressing pro-capitalist ideas, helping other people and seeing friendship as essential to a good marriage. MOVIEGUIDE® advises caution for older children because of the movie’s Non-Christian elements and the silly wedding ceremony.

Watch A BRIDESMAID IN LOVE: