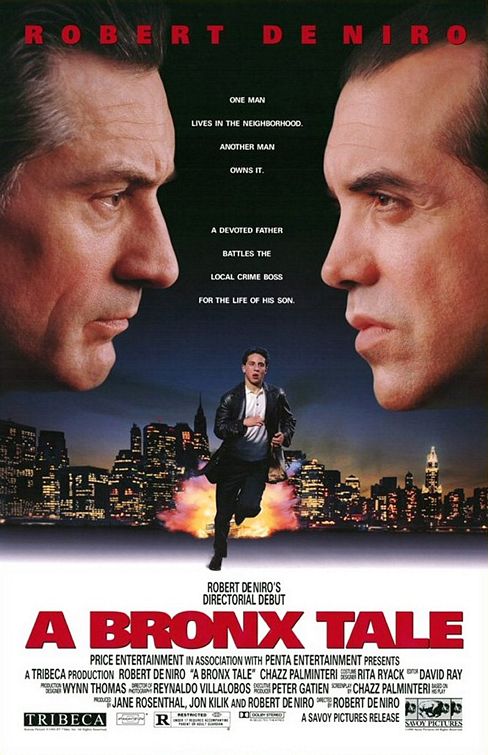 A BRONX TALE is about a young Italian boy who learns from his experiences to respect his father and that real success is more than appearances in 1960's New York. The movie is heartwarming and contains commendable acting, but the foul language is more than excessive.

A BRONX TALE is an entertaining and sometimes heart-warming story of the trials and tribulations of growing up in a time when gangsters looked like heroes to many inner city youth. The story takes place in 1960’s New York where Calogero lives with his bus driver father, Lorenzo, played by Robert DeNiro. Lorenzo is a working man who flees temptation and as a result, does not experience great financial rewards. Calogero idolizes the “boss” of his city block, Sonny. When he was nine, Calogero saw Sonny murder a man. Through Sonny’s protection, Calogero’s life is saved when Sonny rescues him from a brawl. When he realizes his “friends” are dead and he has been spared, he runs the whole way to the neighborhood bar to thank Sonny. When he arrives, he is suddenly faced with the death of his idol and friend, Sonny. As a result of all these deaths, he comes to the realization that his father is not the “sucker of a working man” that he thought he was. He discovers his father is strong, not because of his spartan lifestyle, but because of his adherence to his convictions.

A BRONX TALE is a very heartwarming tale about life in the Bronx. It contains a great deal of foul gangster language, but beyond that it is a story which is full of lessons on growing up. If the language had been cleaned up, it would have been worth the admission price.