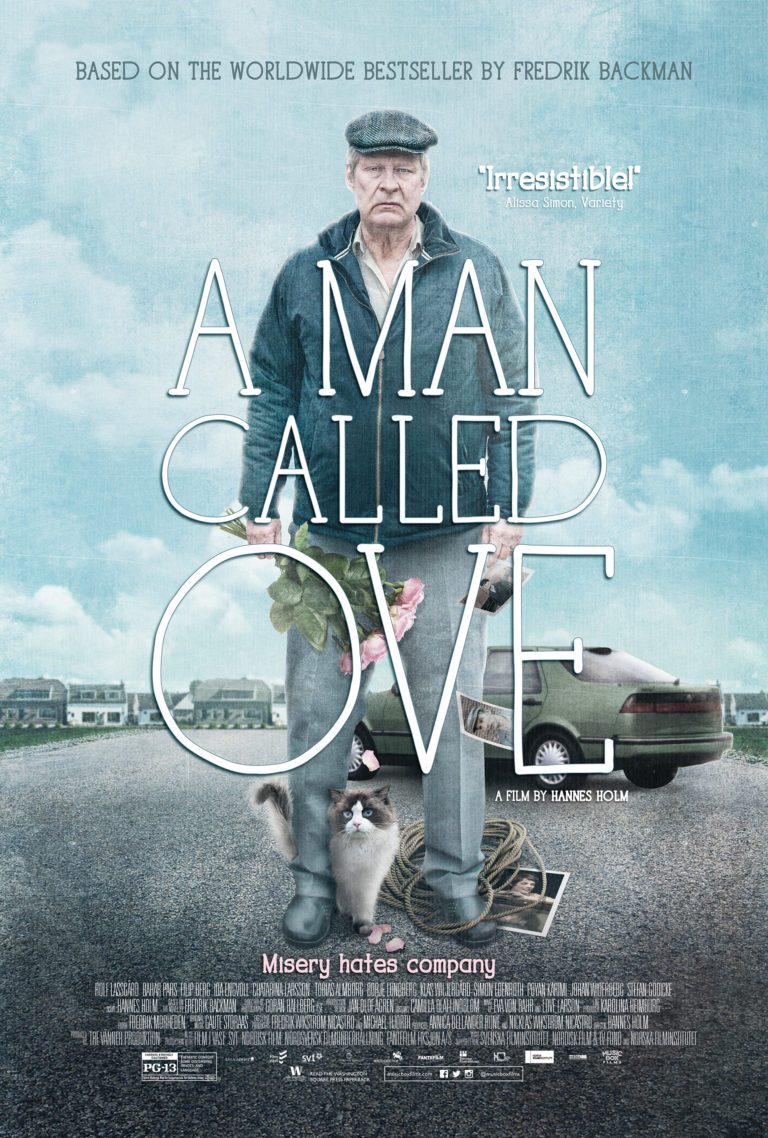 A MAN CALLED OVE is a warm and witty character study from Sweden about a old curmudgeon named Ove who loses his job and tries to commit suicide to join his late beloved wife in death. Ove’s multiple suicide attempts are foiled by a new family moving in next door and other townsfolk. The family breaks all the neighborhood’s rules, causing the ever-controlling, diligent Ove to step in and maintain order on their quiet street. As Ove gets more involved in their lives, he looks back on his own life and reassesses his decision to kill himself.

Despite its slow pace, A MAN CALLED OVE shines with charm and heartwarming performances by a talented cast. It has a strong moral worldview with redemptive elements, including a metaphorical confirmation of the afterlife at the end. There is the moral problem of Ove’s suicide attempts, but the movie never asks viewers to accept these drastic methods of coping. That said, A MAN CALLED OVE has too much foul language along with a homosexual character who clashes with his father. So, extreme caution is advised.

(BB, C, Ro, PCPC, HoHo, LLL, VV, S, M) Light moral, redemptive worldview where people find their purpose in helping their fellow man and promoting honesty is the best policy, doing the right thing, loving one’s neighbor, bearing one another’s burdens, and the existence of an afterlife is suggested, but marred by Romantic elements, including politically correct subplot where protagonist takes in a young man because angry father has kicked him out for being a homosexual; at least 60 obscenities and profanities including two “f” words, over a dozen “s” words, several “d” words, and numerous “god” exclamations; several strong instances of aggressive and accidental violence, a man gets hit by a train, protagonist assaults men who try to steal is wallet, protagonist trips a clown, protagonist attempts suicide by hanging, asphyxiation and shooting himself, a man threatens another man by pushing him up against a car, a mild scene of a bus crash and its aftermath (including some bloody injuries); no depicted sex, but there are references to one character’s homosexuality; no nudity; no alcohol; no smoking or drugs; and, some worldview problems such as protagonist’s repeated attempts to commit suicide.

A MAN CALLED OVE is a warm and witty character study from Sweden about a grumpy old curmudgeon named Ove, who tries suicide in order to join his late wife in death. His multiple suicide attempts are foiled by a new family moving in next door, who break all the rules of the neighborhood and cause the ever-controlling Ove to assert himself to maintain order on the quiet street where they all live. Will he return to his ultimate goal of suicide once he solves all the neighborhood’s problems? A MAN CALLED OVE is a slowly paced yet entertaining story of life after loss with heart, humor and a moral, redemptive worldview, but there’s too much foul language and some Romantic elements that include references to a homosexual character clashing with his father.

Ove lives in a tiny Swedish town where life is simple and driving is forbidden. He spends his days working in the factory, visiting his wife Sonja’s grave, and making sure the townspeople perfectly keep all the community bylaws. He’s the typical grumpy man of the neighborhood who does the right thing on principle and thinks most people are idiots. While still mourning the loss of his wife, Ove is let go from the factory where he’s worked for the last 43 years. Believing he has no reason to live, Ove decides to commit suicide so he can join his wife in the afterlife.

Sadly (or happily) for Ove, suicide is harder than it looks. He tries hanging himself, only to be interrupted by his new neighbors, Parvaneh and Patrick, hitting his mailbox with their car. Always concerned about keeping the peace, Ove puts his suicide on hold to show the new family how to properly park a trailer. So, the pattern begins. Every time Ove tries to kill himself, whether by hanging, asphyxiation or shooting himself, he’s interrupted once again by someone in his community who needs his help. Ove simply cannot watch these “idiots” ruin their lives, or his neighborhood.

Each suicide attempt leads to a flashback in Ove’s life that provides more insight into his character and past filled with tragedy. The audience, just like Ove’s new neighbors, will fall in love with the grumpy old man as the story continues. The movie does an excellent job allowing viewers to understand Ove’s desire to end his life, while always rooting for him to realize the positive impact he makes in his community and stay alive. As he lives longer than expected, he forms a true bond with the new family next door and eventually realizes there can be life after tragedy if you focus on the people around you.

A MAN CALLED OVE shines with charm and heartwarming performances by a talented cast. Rolf Lassgård is exceptional as the grumpy yet lovable Ove. The movie strikes a perfect tone between the darkness of suicide and the lighthearted wit of the quirky supporting characters. The audience will most definitely cry at the tragedy of Ove’s flashbacks in one scene and laugh at the comedy of his grumpy attitude in the next. Sadly, though, this grumpy attitude comes with excessive foul language that spoils the movie’s charm. It would have been better suited without so much strong language. There’s also a subplot involving a homosexual character who clashes with his father until Ove takes him into his home.

The flashbacks provide much-needed information about Ove’s character and life, but also lead to a pacing issue in the movie. Nothing much seems to propel the movie forward during the first half, until it finds rhythm in relying on the viewer’s curiosity. Viewers realize Ove’s wife has passed away, but the movie doesn’t tell them how or how long ago. It is only when the movie makes viewers care what happens to Ove that the flashbacks are so captivating and intriguing.

Ultimately, Ove brings the community together. The fact that Ove’s suicide attempts keep getting interrupted by people who need his help provides a great metaphor for life. It even relies on biblical principles such as loving your neighbor and putting others before yourself. Even after loss and heartache, Ove learns there is always reason to live, because others need your help and depend on you. Also, he operates under a strict moral compass, often policing the neighborhood in simple principles of right and wrong.

Thus, A MAN CALLED OVE has a strong moral worldview with redemptive elements, including a metaphorical confirmation of the afterlife at the end. There is the moral problem of Ove’s suicide attempts, but the movie never asks viewers to accept Ove’s drastic methods of coping with tragedy. So, A MAN CALLED OVE encourages viewers to hope that Ove will choose to live rather than die. That said, the movie’s frequent foul language and homosexual references require extreme caution.