"Train Up a Child in the Way They Should Go" 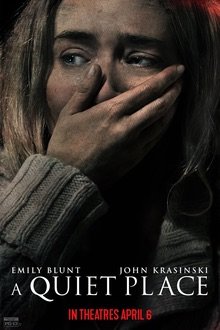 (CC, BB, PP, VV, M):
Dominant Worldview and Other Worldview Content/Elements:
Strong redemptive, moral worldview with biblical themes extols hope, sacrifice, family, protecting children, and a scene of the family praying together, with a positive view of an American family trying to survive;
Foul Language:
No foul language;
Violence:
Strong scary violence includes disturbing creature moments, an animal gets attacked by a monster, a woman injures her foot, intestinal wounds of an attacked woman, a scene of childbirth, family fights monsters with axes and shotguns, and there’s a bloody shotgun wound;
Sex:
None;
Nudity:
None;
Alcohol Use:
None;
Smoking and/or Drug Use and Abuse:
None; and,
Miscellaneous Immorality:
Nothing else objectionable.

Set in a world overrun by vicious creatures that hunt by sound, A QUIET PLACE takes psychological thrillers to a new level in an emotionally moving story of a family’s attempt to survive. Behind 90 minutes of high-quality suspense lies an exploration of parenthood that provides surprising depth to the movie’s thrills. Parents will relate to the husband and wife’s struggle to protect their children in such a dangerous world, but should use strong caution when bringing their children along for the ride. A QUIET PLACE is non-stop suspense, with several scenes of violence, gore and creature terror that aren’t for the faint of heart.

The opening scene sets the suspenseful tone for the rest of A QUIET PLACE. The Abbott family is scavenging for supplies in a post-apocalyptic town. Lee (John Krasinski) and Evelyn (Emily Blunt) are a strong husband and wife duo who speak sign language to their children urging them to be as quiet as possible. The modern world has been taken over by monster-like creatures who hunt and viciously kill people based on the slightest of sounds. The harrowing opening sequence quickly reveals to the audience just what happens when one of the children is too loud, and it makes every single sound terrifying for the rest of the movie.

Back in their fortified farmhouse, the Abbotts try to live as normal of a life as possible. Evelyn is 38 weeks pregnant and creates a sound-proof baby cradle. Lee searches for the monster’s weakness while teaching his son how to survive. The eldest daughter, Regan, deals with her strained relationship with her father, believing he no longer loves her. The family goes about their normal, quiet routine until Evelyn goes into an early labor while Lee is out gathering food. Unable to deliver a child without making a sound, the monsters close in on the once-quiet farmhouse, forcing Lee and Evelyn to protect their family at all costs.

A QUIET PLACE has received some acclaim, for good reason. Actor John Krasinski’s second movie as a director is a filmmaking masterclass, from script to aesthetic style to the cast’s winning performances. The story is a tight 90-minutes that flawlessly transitions between big thrills and touching emotional moments.

The real win of the movie is its ability to make the monsters secondary to sound itself. Not overly concerned with gore, most of the monster attacks happen very quickly. They simply tackle their prey and disappear. One sound, and you’re simply gone. As the movie progresses, it reveals more and more of the creatures, and they are scary, but somehow the movie manages to make sound the real terror of the story. The idea of a horror movie that weaponizes sound is enough to leave audiences on the edge of their seat throughout the entire movie, but A QUIET PLACE provides great execution as well.

The stakes are so high that the smallest of things become life or death. One of the movie’s most suspenseful moments involves a loose nail on a staircase that the audience just knows someone is going to step and scream in pain, at some point later on in the story. Yet, the Abbott family remains intelligent and well-prepared. Unlike many horror movies and thrillers, the conflict comes from an unbeatable opponent, rather than stupid decisions made by the protagonists.

The core of the movie is grounded in the personal relationships between the Abbott family, from Evelyn’s pregnancy to Lee’s troubled relationship with his daughter. The themes of parenting and the difficulty of keeping children safe (in any world, let alone the one in the movie) are carefully woven throughout the story. Near the climax, Evelyn pleads with Lee, “Who are we if we can’t protect them?”

The movie’s family-centered themes lead to a refreshing, healthy depiction of family love and hope that echo several biblical themes. Lee and Evelyn are a picture of a strong, husband and wife team, revealing a combination of tender love and no-nonsense partnership in survival. The roles of a mother and a father are explored through the ways Lee and Evelyn try to survive when separated. Evelyn shows her feminine strength through childbirth and protecting her baby, while Lee reveals his fatherly love for his daughter in a way that echoes biblical themes. There is even a scene of Lee and Evelyn leading their children in silent prayer before dinner, as if to say they can’t simply rely on their own power to survive in this world.

A QUIET PLACE serves as a surprisingly strong allegory for parenting and for “training a child in the way they should go.” Caution is advised for the movie’s intense, scary suspense.

Rent or Buy A QUIET PLACE: