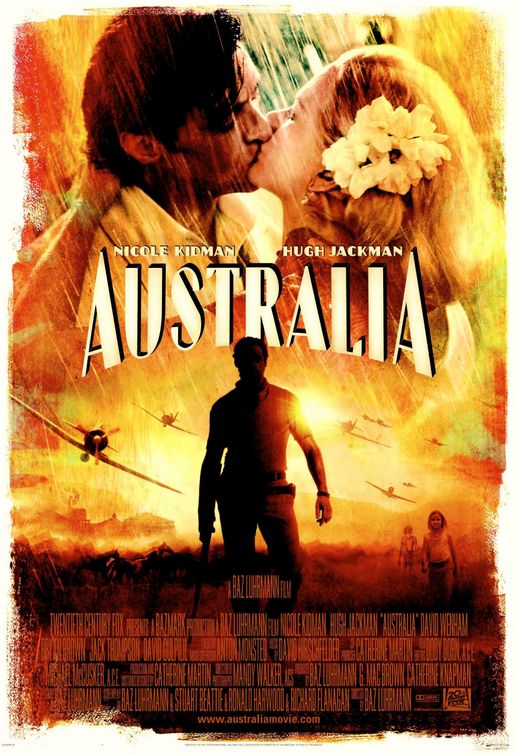 AUSTRALIA is a sprawling epic set in 1939 to 1941. It stars Nicole Kidman and Hugh Jackman as aristocratic Lady Sarah Ashley and a no-nonsense cattle drover. The couple is thrown together when an evil ranch manager kills Lady Ashley’s husband. They also become surrogate parents to a mixed-race aborigine boy named Nullah. Together, this unlikely family faces cattle stampedes, poisoned water, desert, murder, separation, and war. Their final confrontation with the evil ranch manager takes place against the backdrop of a Japanese attack on the small port of Darwin.

AUSTRALIA could have been a great epic, but it falls apart on three key levels. Baz Luhrmann, the director, could not figure out how to end the movie, so there are at least three and maybe four endings. Also, the movie’s worldview promotes several myth conceptions about Australian history and Christianity. Finally, the filmmakers try to pack too much into their epic, which occasionally loses focus despite some excellent performances and exciting, heartfelt moments. MOVIEGUIDE® advises strong caution due to the movie’s endorsement of aborigine mysticism and occultism. Christians who are grounded in biblical faith will be deeply concerned about this.

AUSTRALIA could have been a great epic, but instead it falls apart on three key levels. Baz Luhrman, the director could not figure out how to end the movie, so there are at least three and maybe even four endings. Also, the movie’s worldview promotes several myth conceptions about Australian history and Christianity. Finally, the filmmakers try to do too much, by mixing David Lean epics with George Lucas spectacle and an old-fashioned sensibility that pays homage to great American westerns.

The movie opens in 1939 with a young mixed-race Aborigine boy, Nullah, telling his story. He is the grandson of King George, the real-life aborigine leader, and the son of a power-mad Australian ranch manager, named Fletcher. His saving grace is the magic he inherited from his grandfather, so he sings victories in several tight situations.

Lady Sarah Ashley, played by Nicole Kidman, comes to Australia to make her husband sell his ranch, Faraway Downs. When she gets there, she discovers her husband has been murdered. The authorities believe Nullah’s grandfather King George did it. At the same time, Lady Ashley discovers that Fletcher has been stealing her husband’s cattle. She fires Fletcher and hires the Drover, played by Hugh Jackman, to help her bring the cattle 1,500 miles back to the town of Darwin, to sell to the government, which is at war with the Japanese.

The cattle drive is fraught with danger, because the biggest rancher around, named King Carney, hires Fletcher to stop Lady Ashley and the Drover form getting to Darwin. Fletcher and his men stampede the cattle and poison the water holes along the way.

The experience of driving the cattle to Darwin creates a bond between Lady Ashley and the Driver, which leads to romance. Lady Ashley also becomes a surrogate mother to Nullah after Fletcher kills Nullah’s mother. Eventually, an attack by Japanese warplanes serves as a backdrop to the final conflict between Fletcher, Lady Ashley, the Driver, and Nullah.

AUSTRALIA would have been a more compelling movie if it had ended on the high note that occurs 60% of the way into the movie when Lady Ashley sees Drover arrive at the ball after they drive the cattle to Darwin. Each successive ending after that gets more and more muddled. The photography is sumptuous in parts but stilted when director Baz Luhrman resorts to an excessive CGI treatment of real events. Throughout the movie, Baz makes sure you are watching a movie. In the production notes, it says his parents owned a theater in the outback. So, apparently, he has picked up theatricality more than story, although his hero, Nullah, pays homage to story. Hitchcock believed all the technical aspects of filmmaker should never get in the way of story.

In a press conference for the movie attended by MOVIEGUIDE®, Baz said he wanted to combine the epic style of English filmmaker David Lean (LAWRENCE OF ARABIA and DR. ZHIVAGO) with the spectacle of George Lucas (the STAR WARS and INDIANA JONES movies). He also clearly pays tribute to American western epics like RED RIVER with John Wayne and SHANE with Alan Ladd. For example, there’s a huge cattle stampede in AUSTRALIA that reminds one of the great cattle stampede scene in RED RIVER, but the scene also mixes David Lead photography with CGI effects ala George Lucas. The combination does not quite work, although the scene is very exciting, especially when it focuses on the characters in the action.

Nicole Kidman does a much better job in AUSTRALIA than she has done in a long time. Here scenes with Nullah are very emotional and touching. Hugh Jackman is also very good as the Drover. He is one of the best when it comes to combining romance and action in a movie, so it’s too bad when the movie loses its focus. The music is uniformly good. It not only references some of the great American westerns. It also is full of themes from THE WIZARD OF OZ and “Waltzing Matilda.”

Another problem with AUSTRALIA is that it is too “on the nose.” The director often tells us what’s going rather than simply shows it. The narration does not help.

The movie’s real problem area, however lies in its politically correct New Age worldview. Today in Australia, aborigines have a high level of extreme pedophile child abuse, beatings, sexual attacks, and murders. Contrary to the movie, most of the mixed breed children were also cast out of aborigine society. The aborigines hated them and didn’t have enough resources to take care of them. The Christian missionaries actually rescued them before they were sexually abused and murdered. The movie portrays the missionaries as villains aided by the police who capture these poor aborigine children. One of the two missionaries in the movie, however, is a pretty good character and helps Drover and his two friends rescue the children. In fact, the missionary says that the children were delivered by God.

Even so, the underlying theology of AUSTRALIA is spiritism. The spirits and occult practices are portrayed as a deus ex machine that rescues the heroes at key plot points. By the end of the movie, the excessive, miraculous ending, especially when coupled with Nullah’s narration, becomes tedious. In fact, some of the audience got bored. The movie is vague enough about the spiritism and occultism of Nullah’s religion to mislead, especially when the young missionary shows up and speaks about God’s deliverance in the movie’s ultimate, most positive climax. Christians who are grounded in biblical faith will be deeply concerned about the movie’s pagan and occult theological messages.

The good news is that the movie also contains some strong moral elements. AUSTRALIA also has a strong pro-capitalist outlook. It extols competition and rebukes monopoly.

Also in the movie, it’s not really Christianity that discriminates against the aborigines. It’s actually the people in the town of Darwin. Darwin, of course, is the name of the pseudo-scientist who invented the debunked, racist theory of evolution. The racist ideology of Darwinistic evolution infected English-speaking societies in the late 1800s and early 1900s, including Australia. Before that, the Christian missionaries had already been rescuing cast-off aborigine children from the brutal practices of their pagan culture. It was the secularized government of Australia, infected by Darwin’s racism, that took a fascist, patronizing tone in dealing with the aborigines and the problems affecting the women and children in that culture.