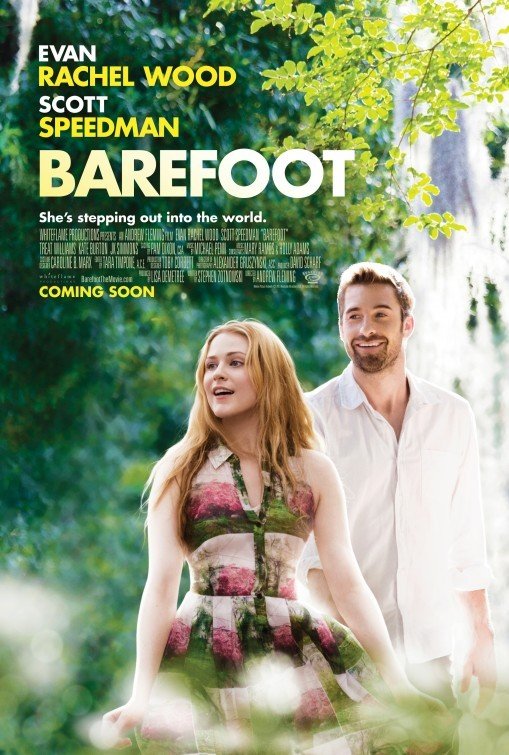 BAREFOOT is a cute romantic comedy about Jay Wheeler, a womanizer and a gambler in debt. Jay is also on probation and works a boring job as a janitor at a psychiatric hospital. When a loan shark threatens Jay to pay back $40,000 or else, Jay wonders if it’s time to ask his wealthy parents for a bailout. He accidentally tells them he’s in a serious relationship, and he’ll introduce her to them, though what he says isn’t true. Now, Jay has to find someone who can pose as his girlfriend. Enter Daisy, a shy, socially awkward young woman who’ll fit the part. There’s just one problem – she’s a psychiatric patient.

BAREFOOT has some endearing moments and is quite entertaining and funny at times. The plot sometimes wanders, however. A pleasant surprise is the character arc Jay exhibits. Starting off as an irresponsible jerk, Jay’s odd relationship with Daisy transforms him into a caring person. This moral, uplifting element is the backbone that makes the movie work. That said, there’s a lewd scene and some foul language, so strong caution is advised.

(BB, C, LL, V, S, NN, A, D, M) Strong moral worldview stresses the importance of owning up to your mistakes and learning to care about others, plus a wedding takes place inside a Christian church; 13 obscenities (including some “f” words) and four profanities; light violence includes hearing a man try to take advantage of a patient, but he’s knocked out before anything happens; light sexual content includes a man and woman in bed in the morning, light kiss between main characters, and some sexual dialogue; upper male nudity and women in lingerie get too much screen time at a strip club; light drinking; smoking cigarettes; and, main character gambles and lies, but is changed by the end.

BAREFOOT is a cute romantic-comedy about Jay Wheeler. Within the first three minutes of the movie, three important things are revealed about Jay. He’s a womanizer, a gambler, and $40,000 in debt to a loan shark. On probation, Jay is limited to his janitorial job at a local psychiatric hospital.

When the loan shark threatens Jay if he doesn’t pay up, Jay decides that it’s time to go to his wealthy parents for help. To avoid his parents finding out about his debt problems, he devises a plan to attend his younger brother’s wedding so he can get his dad to invest in a fake business idea. When he calls his parents telling them he’ll be at the wedding, he accidentally says he has a serious girlfriend, and she’ll be at the wedding with him. Immediately, he regrets his lie, since he has no one to take to the wedding.

One night, while leaving the hospital, Jay hears one of the staff trying to take advantage of one of the psychiatric patients, a young woman named Daisy. Jay intervenes and knocks the perpetrator unconscious. Daisy, frightened and naive, follows Jay out of the hospital. When Jay realizes she snuck out of the hospital behind him, it dawns on him maybe Daisy can pretend to be his girlfriend at the wedding. There’s one problem, however. Daisy was raised in isolation her entire life and is very socially awkward.

Jay and Daisy arrive at the wedding. Daisy is able to charm Jay’s parents, but it doesn’t take long for the truth about Daisy to get out. When Jay’s dad figures out his intentions and the police start looking for Daisy, Jay steals his dad’s motorhome and he hits the road with Daisy.

As they travel together, Jay learns to care for someone other than himself. Daisy, in turn, begins to come out of her shell. Things start to unravel when the truth about Daisy’s mental state comes to light, and the police close in on Jay.

BAREFOOT has some endearing moments and is quite entertaining. While the characters hold ones attention, the plot meanders aimlessly at times. A pleasant surprise is the character arc that Jay Wheeler exhibits. Starting off as an irresponsible jerk, his odd relationship with Daisy causes a transformation in him where he starts to think about the needs of others before himself. Also, though it’s developed into a romantic relationship, it’s a breath of fresh air to see a romance story that doesn’t rely on the two main characters sleeping together. Instead, an innocent girl starts to learn more about the real world, and a messed-up guy begins to learn what love really is. That said, there’s a scene that takes place at a strip club that gets way too much airtime. Also, there’s some foul language littered throughout BAREFOOT. So, strong caution is advised.