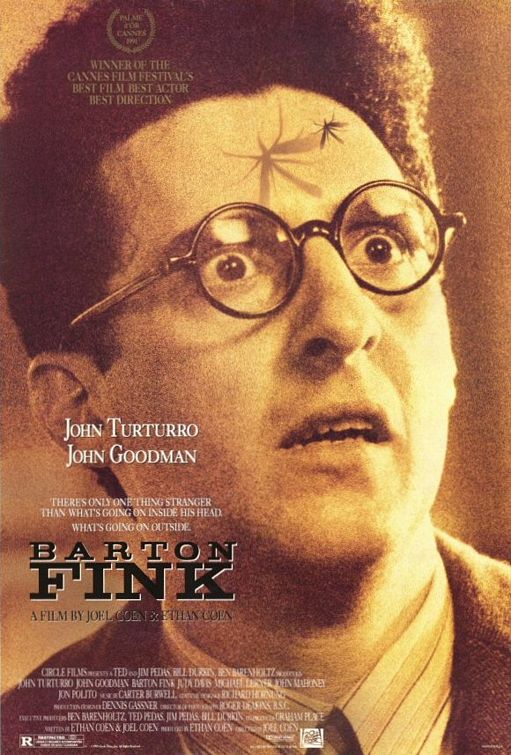 BARTON FINK is an introspective 1940's New York playwright who is brought to Hollywood by Capital Studios after his successful Broadway debut. He experiences the hell of "LA-LA-land" dominated by the inverted values of the movie industry and complete with a neighborly psycho killer. Well-crafted art, BARTON FINK is not entertainment but a slow-paced "in" joke about Hollywood filled with arrogance, profanity, bloody horrors, and grotesqueries

BARTON FINK is an introspective yet trendy 1940’s New York playwright who is brought to Hollywood by Capital Studios after his successful Broadway debut to craft a Wallace Berry wrestling movie. There he experiences the hell of “LA-LA-land” dominated by the inverted values of the movie industry, complete with a neighborly psychopathic killer.

In conformity to the Communist fashion of the times, Bart wants to pen the inner struggles of the common man. He checks into the eerie Hotel Earl with a ream of white paper and his typewriter. He is greeted by “Chet,” the pallid hotel clerk who symbolically climbs up and out of a trap door built into the floor to welcome his new guest.

Bart’s assignment is to construct a wrestling script, which Jack Lipnik, chief honcho at Capital Pictures, hopes will become the foundation for a blockbuster movie. Personifying the humorous evils of Hollywood, Mr. Lipnik is a devilish, heavyweight Jewish-American godfather who can’t read. The fact that he is an illiterate studio head exemplifies an industry that frequently promotes people beyond the level of their incompetency.

Returning to the drearily majestic, Jugendstil-styled hotel, Bart struggles with writer’s block. As the wallpaper peels off the walls because of the intense heat, Bart stares endlessly at a framed mural of a woman facing the ocean, unable to pen more than the script’s opening lines.

Bart’s silence is interrupted by loud sobs from another room. Suddenly, he meets his melancholy neighbor, a burly insurance salesman named Charlie Weaver, who becomes his inspiration for the wrestling script.

Meanwhile, Bart befriends an acclaimed screenwriter with a drinking problem, W.P. Mayhew, and his mistress/secretary, Audrey. The plot unfolds as Bart is corrupted by his new friends, including “Mad Man Mundt,” who literally sets the story ablaze with murder and pyromania.

Uniquely, BARTON FINK is a surrealistic, “low ironic” tale of a man who fails in spite of himself. Helping him fail is heinous Hollywood, characterized by incompetent executives and a vomiting lush who enjoys a success that isn’t rightfully his. Also symbolic is “Mad Man Mundt,” a psychopath representing a world who deceives man into thinking they can be friends.

Biblically, the subject of wrestling brings to mind the Old Testament account of Jacob wrestling with God (Genesis 22-32). In contrast to Jacob, Bart wrestles with idolatrous Hollywood in hopes of gaining a blessing. His agonizing struggle is thematically developed as he pens a script on the subject. The Book of Genesis is even pictured with alternate text to emphasize his spiritual angst.

Aside from its message, watching BARTON FINK is like seeing a painting come to life with crisp hues and images. Reminiscent of the decadent surrealistic art of Salvador Dali, the screen becomes a canvas of nostalgic yet contemporary colors. Like Dali’s melting watches, the wallpaper in Bart’s room continually peels off, exposing the bare wall of nothingness.

However, BARTON FINK is not entertainment. It is an “in” joke about Hollywood by two of the hottest new filmmakers in Hollywood, Joel and Ethan Coen. Filled with arrogance, bitterness and disgust, the film embodies the self-centered, intellectual, decadent, low-ironic style that marks the end of an age. Critics will adore the symbolism. The average moviegoer will be bored by the lack of drama, the flaccid unappealing character of the hero, the disgusting language, and the bloody horrors and grotesqueries which have been woven into the film for that to challenge the simplistic Hollywood movies that are designed merely to make money at the box office.

In their biting sophistry and cynicism, did the Coen brothers understand the good, the true and the beautiful? Have they, like their angry European counterparts in the 1920s, forgotten the audience as they kick the system that prospered them in the butt? Yes, they have created a movie that approaches art, but it is mean-spirited art that ultimately says more about the bankruptcy of the intellectual community in the United States, than it says about the movie industry.

In the final analysis, BARTON FINK is a dull, slow-paced film that will alienate most viewers. Unfortunately, its satire falls short weighed down by its own pretensions. As it critiques the Communist theater of the common man, it offers nothing but venom in its place because the Coen brothers have failed to look for the Truth that will set them free from the self-loathing of the pampered elite.