BEASTS OF NO NATION

"A Heartbreaking But Violent and Disturbing Tale of a Child Soldier" 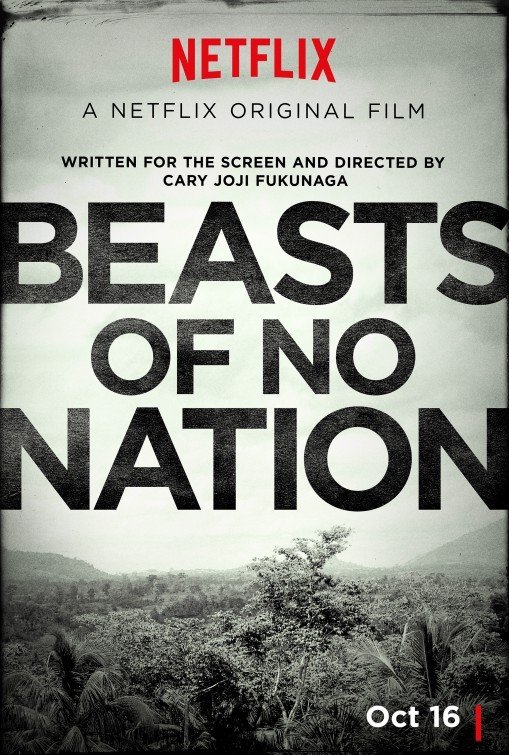 BEASTS OF NO NATION is a story about a young African boy’s loss of innocence and the strength he must convey to carry on with a childhood torn away from him. Agu, a young boy, is forced to join a group of guerrilla soldiers after the death of his family leaves him alone in the jungle. Leading the soldiers is a cruel but charismatic leader known only as the Commandant. Fearful for his life and desperate for a place of security, Agu becomes one of the Commandant’s precious child soldiers.

Based on the book by an American writer born to Nigerian parents, BEASTS OF NO NATION is told through Agu’s viewpoint. Numerous close-ups of Agu’s eyes help viewers gets a better understanding of what child soldiers endure. Even after Agu is rescued, he has trouble shedding his horrific past, but he’s helped by the pastor and a counselor at a Christian orphanage. BEASTS OF NO NATION ultimately tells a story of survival, friendship and redemption, but the violence, brutality, foul language, and drug references are excessive. Therefore, extreme caution is advised.

(CC, BB, PaPa, H, LLL, VVV, SS, NNN, A, DDD, MMM) Strong Christian, moral worldview about a child soldier in an unnamed African country forced to become a killing machine but eventually escapes and is led to redemption at a Christian orphanage where the pastor leads the children in prayer and the counselor helps the boy with the intense guilt he feels for the evils he did, which encourages the boy to stay at the orphanage, but most of the movie takes place among the group of evil soldiers led by a cruel leader called the Commandant, so there’s a lot of brutality engaged in greedily and violently seeking riches, women and power; 40 obscenities and profanities, boys vomit, and boy urinates on his brother; very strong violence and brutality includes boys are trained to shoot people in the head, blood gushes from a man’s head, blood gushes from all body parts after people are shot dead, boy thrusts a knife into a man’s head, broken bones and dead bodies piled on top of each other, excessive gun shots, commander grabs soldiers by the shirt and slams them to a wall, commander grabs woman by her dress and throws her on the floor, soldiers kick a baby and mother in the head, soldiers attach bombs to innocent people’s heads and blow them up, dead boys floating in river, decaying bloody bodies depicted in villages; strong and disturbing but brief sexual content includes implied pedophilia in one scene, soldier shown on top of clothed screaming woman preparing to rape her, implied prostitution when soldiers leave with girls to separate bedrooms, implied use of women for sexual pleasures; extreme images of two soldiers’ genitals while running in the forest preparing for war; commander and soldiers each drink one beer to celebrate a victory; very strong drug use includes adult soldiers force child soldiers to take heroin to make them more efficient killers, soldiers smoke and roll marijuana cigarettes, soldier cuts his skin and inserts drugs on open wound to get high quicker, commander inhales cocaine twice; and, very strong miscellaneous immorality includes soldiers steal clothes, food and guns from families, greedy soldiers kill husbands and commander kidnaps boys to become soldiers, soldiers seek revenge on government, corrupt government officials delight in personal wealth and refuse to take a stand for innocent victims.

BEASTS OF NO NATION is a tragic movie about a young African boy’s loss of innocence as he’s forced to become a child soldier.

Based on the book by an American writer born to Nigerian parents, the movie opens up in a small village where Agu plays chase with his older brother. He is a young boy with a great joy for life, merely focused on what’s for dinner and climbing trees with his friends. When army troops from the capital city arrive to squelch a rebellion against the country’s corrupt regime, his childhood is shattered. His mother and sister escape to a nearby city, but Agu is left with his father and brother. He hides in a shed with them and nearby neighbors, desperate for their lives. The soldiers find them and shoot Agu’s father in front of him.

Agu and his brother run for their lives, but the soldiers manage to kill his brother too. Agu survives and runs into the jungle. A group of young rebels discover him alone in the forest. The rebel commander takes him under his wing and puts him through a harsh treatment of initiation rituals to become one of them. Here Agu learns how to kill where he is forced to stab a man in the head to solidify his loyalty. After he kills the innocent man, he is praised by the commander but torn inside. He becomes friends with Strika, a mute boy about his age, who gives him strength through his friendship.

As the movie progresses, Agu’s young eyes witness things a child should never have to endure. Agu is routinely given drugs to give him the lift and detachment he needs to kill, he watches his fellow soldiers rape women and is horrified when he sees his commander delight in teary-eyed prostitutes for personal pleasure.

Before long, the commander recognizes Agu’s internal strength and loyalty. He promotes him from ammo carrier to rifle-toting soldier. He becomes the commander’s right hand man, learning to speak as little as possible, always fearful one of his drug-infused soldiers will turn on him. After endless fighting, the commander runs out of food for his soldiers, and the boys suddenly threaten to leave him. Addicted to drugs and hopeless, the commander tells them to go if they want.

Agu along with a handful of others leave, where they run right into the United Nations. They are forced to their knees where the UN rescues them and sends them to an orphanage. Agu is inducted into a new life of happiness, a warm bed, proper nutrition and the ability to go to school. Yet, he can’t shake his past. His nightmares of death take hold of him, and he doesn’t know how to be a boy anymore. One dreary night, the other boys rescued make a pack to leave, unable to detach from their past lives and decide they are killers at the core. They urge Agu to escape with them, but he denies them, staying at the orphanage in hopes of a better life. In the end, Agu musters the courage to tell his counselor he hasn’t opened up to her because he’s afraid she would think he was a beast within due to all the sins he committed. This tragic confession is the heart of the movie, showing the damaging internal effects of war on child soldiers.

The movie does an excellent job at conveying what life is like for a child soldier. It’s a great script with a high production value, but the extreme measures used to portray child suffering are almost too tragic to watch. The death, blood and constant abuse the soldiers experience is heartbreaking and sickening.

BEASTS OF NO NATION will emote great empathy for the boys and rage towards the corrupt regime, but it’s a disturbing movie. With never-ending death, violence and bloody scenes, it’s a hard watch, but deserves great praise for staying true to the present theme and not forsaking comfort for reality. BEASTS OF NO NATION has a strong Christian, moral message overall, but the violence, brutality, foul language, and drug references are excessive. Therefore, extreme caution is advised. Most media-wise viewers will want to skip this movie, despite its final positive message and its exposé of one of the world’s greatest evils – adults forcing children to become ruthless war machines.