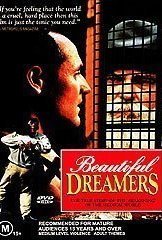 This is the true story of how Dr. Richard Bucke alters his treatment in insane asylums after realizing that the physican's main concern should be his patient's feelings. Guiding Dr. Bucke's self-discovery is Walt Whitman, whom an Anglican pastor labels as an immoral atheist out to destroy traditional values and Victorian society. BEAUTIFUL DREAMERS closely resembles AWAKENINGS, although moviegoers are forewarned that it contains plenty of nudity, new age philosophy and belittling of the Church.

BEAUTIFUL DREAMERS is the true story of how Dr. Richard Bucke developed his new approach to treating the inmates in a Canadian insane asylum in the 1880s after realizing that a physican’s main concern should be the patient’s feelings. Guiding Dr. Bucke’s self-discovery is Walt Whitman, the famous American poet. The local citizens, including an Anglican pastor, regard the patients as monsters and Walt Whitman as an immoral atheist out to destroy traditional values. The conflict comes to a climax as the town’s cricket team, led by the pastor, is invited to an exhibition match against the mental patients. Dr. Bucke wins the moral victory of treating all people with dignity, even those with emotional disorders.

BEAUTIFUL DREAMERS tells a true story that is both touching and eye-opening. Regrettably, BEAUTIFUL DREAMERS has an excess of nudity. In one scene, Dr. Bucke and Whitman are sitting on a riverbank nude. Mrs. Bucke appears and proceeds to take off her clothes too. Also, this film encourages New Age or Transcendental philosophy. Whitman’s poetry is called “the Bible of the New Age,” and he declares that the church is not a godly institution.