"Not So Holy Innocent" 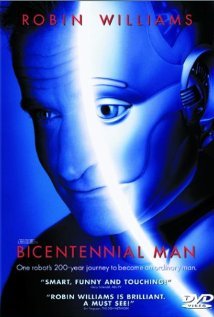 In BICENTENNIAL MAN, sometime in the near future, Mr. Martin accepts the delivery of his new robot, Andrew, played by Robin Williams. Mr. Martin discovers that Andrew has a unique personality and incredible learning capacity. Andrew’s creative talents make him wealthy. Years later, Andrew falls in love with Mr. Martin’s great granddaughter and decides to become human. They couple, and, as she ages, he figures out that he must die to be really human.

Regrettably, BICENTENNIAL MAN is flawed by poor story development. If BICENTENNIAL MAN had just focused on its first storyline, it would have been very entertaining and redemptive. In this first storyline, Andrew discovers that he is unique, leaves his home and then returns when he discovers that love and family are more important than freedom. In the second storyline, Andrew seeks his own kind. By the third storyline, Andrew just wants to become another human being and interprets humanness in terms of sexual gratification. Seeking marriage with a human being, Andrew gets pretty preachy about why he should be considered human. There is a politically correct message, which undermines the better aspects of the movie.

(Pa, FR, PC, C, B, LL, S, A, MM) Vague New Age worldview about a robot trying to become a human being & implication that he goes to Hollywood heaven on death, plus politically correct elements that everybody is human featuring statements like “How can we tell the difference between robots with real human parts from an actual human?” as well as moral & redemptive elements; 13 obscenities & 4 profanities; no violence; implied fornication & mild discussion of sex; no nudity; alcohol use; and, teaching a robot to swear, euthanasia & woman marries robot.

A likeable movie, BICENTENNIAL MAN almost succeeds. It has heart, humor and imagination. The direction, acting and settings are superb. The first two-thirds of the movie are entertaining; and then, the storyline seems to jump the track and head off in the wrong direction.

Why? Well, BICENTENNIAL MAN seems to unintentionally link several storylines together around the character of the robot who is the hero of the movie. One important principle of good scriptwriting is that the writer tells one story within a framework of a single movie. Of course, such principles can be broken, but great care must be taken, or the movie will fail.

BICENTENNIAL MAN is set sometime in the near future. At a beautiful California estate, Richard Martin (played brilliantly by Sam Neill) and his family accept the delivery of their new robot, Andrew (Robin Williams), the ideal house servant. Quickly, Mr. Martin realizes that this robot is unique. Andrew learns, cares and creates. Moreover, Andrew has a special place in his robot heart for the youngest Martin daughter, whom he calls “Little Miss.” The other Martin daughter thinks Andrew is just a robot.

When Mr. Martin, whom Andrew calls “Sir,” takes Andrew back to the robot factory, the management of the factory wants to destroy Andrew, fearing that a robot who is really sentient will become a threat to human kind. Mr. Martin refuses to allow them to destroy Andrew and sets about educating Andrew. As the years pass, Andrew’s creative talents make him a very wealthy robot.

After much education and many years, Andrew decides he wants to be free. This breaks Mr. Martin’s heart, but he gives Andrew his freedom. Eventually, he and Andrew reconcile at Mr. Martin’s deathbed.

Andrew then goes looking for his own kind in the second part of this movie. He finds that most of his own kind have been destroyed, or reduced to mere robots.

Now realizing that he is a stranger in a strange land, Andrew in the third storyline returns to San Francisco and renews his contact with the Martin family, noting that it is the only family he has. Little Miss is now an old woman, but her granddaughter, Portia, looks just like her as a young woman (Portia and the older Little Miss are both played by Embeth Davidtz).

Andrew falls in love with Portia. Prompted by his love, Andrew decides to become human. Working with Rupert Burns (Oliver Platt), the son of the inventor of Andrew’s line of robots and using his wealth of education and positronic brain, Andrew starts to invent the pieces that he needs to look and actually become more human. Of course, the humanized Andrew looks like Robin Williams.

Next, Andrew goes before the World Court to be declared human and to be allowed to marry Portia. When the World Court refuses, Andrew and Portia move in together anyway.

After several years pass, Andrew finally admits the truth that although he is practically eternal, Portia is aging and will eventually die. Thus, he has to face the prospect of losing every human being whom he loves to death. Therefore, Andrews invents a way to age, so that he too can die. When he finally dies moments before the World Court approves his human status, Portia asks her nurse to pull the plug and comments that she will see Andrew soon, implying that they’re going to some sort of Hollywood heaven.

If BICENTENNIAL MAN had just focused on the first storyline, it would have been very entertaining and redemptive. In many ways, this first storyline is similar to TOY STORY 2. Andrew discovers that he is unique, leaves home and then decides that love and family are more important than freedom or fame. In the second storyline, Andrew seeks his own kind. Regrettably, by the third storyline, Andrew just wants to become another human being and interprets humanness and love in terms of sexual gratification. Seeking marriage with a human being, Andrew gets pretty preachy about why he should be accepted. There is a politically correct, pro-interspecies marriage message here, but it is not developed with any degree of intelligence or wisdom, and it undermines the better aspects of the movie.

Another ending would have made this movie terrific. Of course, the best ending to this type of movie is that the creation sacrifices his life for someone he loves. Or, like Woody in TOY STORY 2, the hero is willing to give up fame and fortune for a family.

BICENTENNIAL MAN is based on one of the famous robot stories by the late science fiction writer Isaac Asimov. During his lifetime, Asimov won several awards for his writing. His books and short stories often contain all of the most popular science fiction themes, including the theme of man and machine, the social importance of machines and technology, and people’s hopes and anxieties about the future.

One aspect of BICENTENNIAL MAN, as Robin Williams pointed out in an interview with me, involves the Christian literary device of a holy fool or holy innocent. This holy innocent theme appears in two movies this Christmas: THE GREEN MILE and BICENTENNIAL MAN. In THE GREEN MILE, the device of an innocent man who appears out of nowhere, manifests God’s grace, is wrongfully accused, exposes the sinfulness of others, and gives up his life for others works to create a powerful redemptive allegory. In BICENTENNIAL MAN, the device fails because the holy innocent in this movie is not only a creation of man not God, but also because the innocent is willing to abandon his innocence to become a sinful, fallen man.

Another literary theme in the movie reflects the FRANKENSTEIN story. FRANKENSTEIN exposes the blasphemy of man trying to play God and create a man from the dead. Eventually, the created monster turns on its creator. In contrast in BICENTENNIAL MAN, the created robot wants to become like his creators, including facing the same demise that they face.

During the process of becoming human, Andrew learns how to curse, drink and have sex. Finally, there is a vaguely New Age comment that he lives on somewhere after he dies.

The politically correct point is that every species has the potential to be human, including Andrew the robot. Regrettably, this PC point undermines the rest of the movie, and turns BICENTENNIAL MAN into PC ROBOT.