BLAME IT ON THE BELLBOY 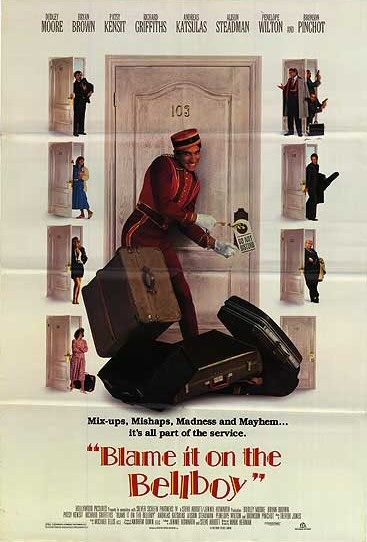 In BLAME IT ON THE BELLBOY, a dimwitted hotel clerk botches the itineraries of three travelers in Venice, Italy, causing the unsuspecting trio to check into wrong suites and experience the chaos of mistaken identity. Presented as wholesome entertainment with very little foul language, this sexually tainted slapstick movie is anything but family fare since it includes repeated sexual innuendo, crude references to genitalia, implied adultery, fornication in exchange for a business deal, and a striptease with rear nudity.

In BLAME IT ON THE BELLBOY, when two similarly named characters, Melvyn Orton and Maurice Horton, check into a Venetian hotel, the bellboy, who doesn’t speak much English, gets the mail mixed up. Real estate salesman Mr. Orton gets a letter intended for hit man Charlton Black, posing as Mr. Lawton, who gets a letter intended for Mr. Horton, who gets a letter intended for Mr. Orton. Mr. Orton is captured by local goons who demand information and shock his brain while threatening to electrocute his genitals. Meanwhile, the real culprit, Mr. Black, mistakes his target for Patricia, who intended to meet Mr. Horton on a blind date. Realtor Caroline Wright jumps into the sack with Mr. Horton (thinking he is Mr. Orton) when he agrees to purchase an expensive villa in exchange for sexual favors. After 30 minutes of shtick, everyone realizes the mistaken identities and BLAME IT ON THE BELLBOY.

Presented as wholesome entertainment, this sexually tainted slapstick movie is anything but family fare. While the filmmakers attempt to keep offensive elements low key (such as foul language and bedroom scenes), repeated sexual innuendo overshadows the entire film.