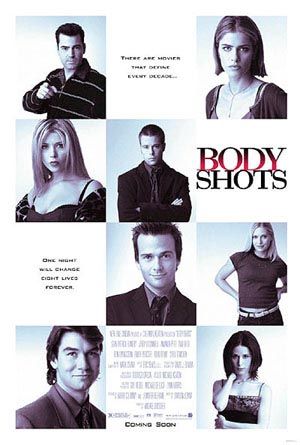 The first 90% of BODY SHOTS is a graphic, sexually charged, dumb, and senseless comedy about four men and four women looking for sex, and perhaps a relationship. Ending in a debate about date rape, the movie is filled with sexual content, many obscenities and no helpful or poignant insight into the troubled modern dating scene.

Though New Line Cinema is distributing BODY SHOTS, it might as well be Larry Flynt Publications. The first 90% of this movie is a graphic, sexually charged, borderline pornographic, dumb, and senseless farce about four men and four women looking for sex, and perhaps a relationship. The final moments becomes a poignant debate over he said/she said defenses on what merits date rape, but the result is a forgettable, mainly offensive throwaway piece of babble on modern sexual sin.

Rick Hamilton (Sean Patrick Flanery) is a young attorney with the, ahem, strongest sense of moral code amongst his cronies. He wants to only have sex with someone he loves, and he also wants to be able to remember it, i.e., not have been so drunk when he does it that he can’t recall the act. Rick is dating another young attorney, Jane Bannister (Amanda Peet), and she likewise holds the same attitudes toward sex.

Rick’s friends, however, hold much looser, more dangerous and less satisfying attitudes. For example, Michael Penorisi (Jerry O’Connell) is a pro-football player and thinks he can get any girl he wants at anytime. Trent (Ron Livingston) looks and acts goofy and fumbles his pick-up lines, but he is undiscriminating when it comes to sex. Finally, Shawn Denigan (Brad Rowe) wants to have a serious relationship, but when crisis hits, he ends up committing anonymous sex. Jane’s girlfriends are no better, all of them party girls, and each having peccadilloes of their own.

These players flirt, a few fornicate, and some of the girls attend a sex class. This entire behavior is quite boring and monotonous. Some of them seem to be having fun, but all talk to the camera and long for something more satisfying. Jane’s friend Sara and Michael get quite drunk, and later Sara accuses Michael of date rape. Sara goes to Jane for legal advice, while Michael goes to Rick for legal advice. (Naturally, this puts a barrier between Jane and Rick.) The remaining moments of the movie entail Sara telling her version (told in flashback), and Michael telling his version (also told in flashback). As court cases are prepared, Jane and Rick wait to see if their romance can be kept alive or not.

Aside from the date rape debate, which seemingly has no resolution, but does offer some awareness of how difficult such a case is to prove, this movie has no redeeming aspects. Oddly, these people admit that sexual activity doesn’t equal intimacy or love yet crave and indulge in it anyway. Their sexcapades are mainly sad, and some of them are downright vulgar.

Needing love and intimacy is normal, healthy and God-given. Fun and adventure are also natural. Yet this movie, like many low-budget romantic tragedies that seem to be cropping up everywhere lately, adds nothing to the by-now obvious conclusion that sex without love or commitment (i.e., marriage) can be painful and downright sickening. No new technique or maneuver can do anything to prevent that. So, this movie offers no new insight or truth, only re-hashing ugly sex and an even uglier conclusion. The movie doesn’t purposefully go into evil, because the goals of the protagonists are love and intimacy, but BODY SHOTS takes its shots to the body, soul and mind.