"The Movie Does Rock You Musically but Not Morally" 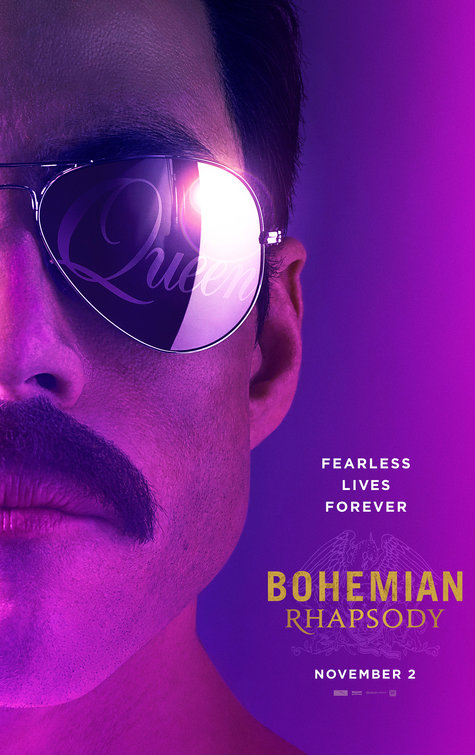 BOHEMIAN RHAPSODY chronicles the rise of the legendary British rock band Queen, and its beloved lead vocalist, Freddie Mercury. When Freddie joins a rock band with other college students, he brings his flamboyant stage presence and incredible vocal range with him. The band sees moderate success at first, and then some major success when they hire a manager and create some of the most iconic hits rock music has ever seen. All the while, Freddie struggles with finding himself, including discovering his homosexual desires for other men.

For fans of Queen, or anyone who appreciates their music, BOHEMIAN RHAPSODY is a fascinating, highly entertaining musical biopic, though too long. The overarching worldview the filmmakers draw from Freddie’s upbringing and character journey is that personal meaning comes from following one’s dream, and that social meaning comes from doing “good deeds.” The movie ties the message together nicely, but it’s rife with false, unbiblical Romanticism, some paganism and works righteousness. In the end, BOHEMIAN RHAPSODY is just too excessive, with foul language, depicted homosexual behavior and hedonism. Happily, the hedonism at least is rejected.

(RoRo, HoHo, Pa, FRFR, B, LL, SS, N, AA, DD, MM):
Dominant Worldview and Other Worldview Content/Elements:
Strong Romantic worldview, with strong depicted, pro-homosexual content, about following your heart no matter the cost and without guidance from God, plus some instances of pagan hedonism (eventually rejected), and main character’s parents accept the ancient pagan religion Zoroastrianism, movie promotes a false works-oriented theology/philosophy, and there are some light moral elements revealing the importance of family and friends in one’s life, with a father and son eventually reconciling;
Foul Language:
12 obscenities (including one “f” word), six profanities (including strong uses of Jesus) and “bullocks” is said many times;
Violence:
No violence;
Sex:
Depicted homosexual activity includes multiple moments of kissing between men and main character attends a homosexual club with men dancing and kissing one another, plus some implied homosexual sex, a man and woman kiss passionately, and a couple lies in bed unclothed after sexual relations;
Nudity:
Upper male nudity, women in revealing outfits, man wears a thong;
Alcohol Use:
Heavy drinking and drunkenness throughout;
Smoking and/or Drug Use and Abuse:
Lots of smoking and depicted drug use (cocaine);
Miscellaneous Immorality:
Strong miscellaneous immorality (some of which is rebuked) includes greed, destruction of property, main character sometimes seems to ascribe to a kind of nihilism, hedonism depicted but ultimately rebuked or shown in a negative light, and main character is estranged from his father, but they eventually reconcile in a touching, positive moment.

BOHEMIAN RHAPSODY chronicles the rise of fame of the legendary British rock band Queen, focusing on its lead vocalist, Freddie Mercury, who’s thought to have one of the best singing voices in rock history. The movie is wonderfully acted and full of entertaining moments, with some positive elements, but it’s a bit episodic and anti-climactic, and contains an excessive amount of objectionable content.

Though Freddie’s given name from his Farsi parents is Farrokh Bulsara, Freddie gives himself new names from time to time as a young man, trying to discover himself. With giant teeth that protrude out of his mouth and a bold, often bizarre sense of fashion, Freddie doesn’t fit in with his peers. One day Freddie meets two college students, Brian May and Roger Taylor, who just lost their lead vocalist for their little band. Freddie impresses them with his perfect pitch and wide range, and just like that he’s in a band. Freddie also meets a pretty girl, Mary Austin, who’s infatuated by Freddie’s bold free spirit, which leads to a budding romance.

As the band, which they name Queen, finds success playing in small venues, they catch a manager’s attention. He thinks Queen could make it big. They record some hits and get the opportunity to tour around the world. On the road, Freddie’s homosexuality begins to surface, even though he’s asked Mary Austin to marry him.

After a couple successful albums, the band decides they want to make an album that’s truly experimental and groundbreaking, a rock opera titled A NIGHT AT THE OPERA. One of the songs Queen wants to turn into the primary single is a little something called, “Bohemian Rhapsody,” a nearly six-minute suite that traverses all sorts of musical genres. The music label’s head, however, refuses to make “Bohemian Rhapsody” the single and says the song will never be a hit. As history knows, of course, the song goes on to become one of the biggest, most beloved rock and roll hits of all time.

Queen’s popularity only grows after releasing A NIGHT AT THE OPERA. Sadly, all the fame and fortune go to Freddie’s head. After coming out to Mary Austin about his bi-sexuality and breaking up, Freddie becomes engrossed in sex, drugs and alcohol. As a result, Freddie’s relationship with the rest of the band, whom he considers his family, suffers and becomes extremely contentious. When Freddie accepts a lucrative offer for a solo career, the band breaks up.

Will Freddie be able to make it without his band?

For fans of Queen, or anyone who appreciates part or all of their music, BOHEMIAN RHAPSODY is a fascinating, highly entertaining musical biopic. Rami Malek completely transforms himself into the enigmatic Freddie Mercury in one of the year’s most convincing performances. Queen’s impact on rock culture is undeniably huge, yet the movie (for better or worse) focuses less on the culture at large and more on Mercury’s personal journey of self-discovery.

The son of traditional Zoroastrian parents (an ancient Iranian pagan religion), Mercury, as shown in this movie, has a distant relationship with his father, who never seems to approve of him. Freddie’s father constantly reminds him of the Zoroastrian maxim, “Good thoughts, good words, good deeds.”

In the end, when Freddie realizes he has the deadly AIDS disease, he realizes the error of his arrogance toward his bandmates and apologizes. He also agrees to participate in the international charity concert Live Aid to raise money for starving families in Ethiopia. This positive contribution finally connects Freddie with his father, who finally expresses love to his son, which is the movie’s most positive and touching moment.

However, at the same time, Mercury decides he doesn’t merely want to pursue sexual encounters with other men, but wants an actual committed homosexual relationship, which he eventually finds in a hairdresser named Jim Hutton, who later joined Queen as a band member. Mercury says he doesn’t want to campaign against AIDS or join LGBT causes. He simply wants to spend his final years doing what he believes he was made to do, which is performing.

The overarching worldview the filmmakers draw from Freddie’s upbringing and personal journey is that personal meaning comes from following one’s dream and the social meaning that comes from doing “good deeds.” The movie nicely ties this message together, but the message is rife with non-Christian, unbiblical, false Romanticism, paganism and works righteousness. This may be the movie’s worldview, but the Freddie Mercury portrayed in BOHEMIAN RHAPSODY seems to ascribe to the lyric he wrote at the end of the song “Bohemian Rhapsody,” where he sings, “Nothing really matters, nothing really matters to me.”

Problematically, BOHEMIAN RHAPSODY lacks a cohesive, climactic narrative structure. Much of the movie is episodic, moving from scene to scene showing how different hit songs came to be. While this is entertaining to watch, it makes the whole of the movie muddled. The ending features the entire 20-minute set Queen performed at Live Aid. This sequence is too long and lacks the dramatic punch the movie’s script needs.

In the end, BOHEMIAN RHAPSODY is just too excessive, with some strong foul language, depicted homosexual behavior and hedonism. Happily, though, the hedonistic behavior in the movie is portrayed in a negative light.