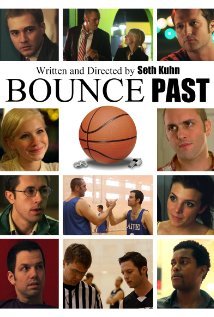 BOUNCE PAST is about five fraternity friends who overcome deep-seated struggles, doubts and fears as a carefully contrived plan unfolds regarding an intramural basketball championship. Tony, the fraternity’s star player, and Dawn, a mysterious, quiet young woman whom he likes, leave for Mexico to get married so Tony will be eligible to play in the championship. While they’re away, Chloe, Zech and JP work through personal questions of purpose, purity, wisdom, and forgiveness.

BOUNCE PAST addresses many issues college students face. It offers a realistic treatment of tough young adult issues, such as promiscuity, drinking, emotional and even physical abuse, self-image, and faith. A biblical worldview, signified by direct references to faith in God’s Word and symbols of Christianity, drives the story. This ultimately elevates the characters from a hopeless approach to life, to one that looks to God for direction and renewal. Extreme caution is advised, however, because of mild violence, alcohol consumption, implied drug use, near sexual encounters, and foul language. Despite this, adult viewers will likely enjoy BOUNCE PAST and find its positive qualities relevant, enlightening and inspiring.

(BB, CC, Ro, L, V, S, A, DD, M) Strong moral worldview with sexual purity often extolled, subtle yet effective allusions to Christianity includes several church scenes, a main character always wears a cross around his neck, another character seeks wisdom in her Bible, a timely Proverb shared between friends, 1 Peter 4:8 is paraphrased, plus light Romantic elements as one main character who suffers from depression claims it was thoughts of her romantic interest that gave her hope and thus helped her stop abusing pills; five to seven obscenities (including “bs,” “s,” “d,” “a,” “h”); several fist fights break out among characters, but no blood is drawn and the fights are short lived; no sex scenes, but there are three close calls stopped by characters who choose the high road; several drinking scenes at college frat parties, including binge drinking; one smoking scene, as well as a scene in which there is marijuana in the background, but it isn’t being smoked; and, characters try to flee from reality.

BOUNCE PAST is the story of five college students involved with an intramural fraternity basketball team. When the team members discover that their rival fraternity has uncovered a secret about their star player, Tony, they must find a way, at all costs, to make Tony eligible for the championship game. They find a loophole rule regarding the eligibility of a student’s spouse. This gives them an outlandish, yet completely plausible, solution: Tony must go to Mexico with a student, get married, and make it back in time for the championship. Of course, this is easier said than done, and conflict abounds between the wedding and the game.

The story focuses on Tony, his love interest Dawn, and another quasi love triangle comprised of Chloe, Zech and JP. Tony is the star basketball player for the APE fraternity, and when they discover he’s not eligible to play in the championship, a plot is hatched to get him hitched in Mexico as soon and as secretly as possible. Lucky for Tony, Dawn, his coy crush, decides to be his temporary bride because, for secret reasons all her own, she’s craving an escape from reality.

Back home in the States, Dawn’s best friend and roommate, Chloe, finds herself having feelings for shy, sweet, nerdy artist Zech, who lives in the frat house where she often parties. This complicates things because her ex-boyfriend, JP, has expressed interest in rekindling their relationship.

One day, Zech approaches Chloe in the library as if to ask her out. He loses his courage, walks away, leaving Chloe sad and confused, then returns moments later with a bold spring in his step. Without a word, he takes her by the hand, guides her outside, kisses her, and in a moment of passion, they run full-speed from the library all the way across campus to the frat house where they proceed to kiss some more and nearly have sex. When Zech sees the silver cross necklace dangling from her neck, he stops, and tells Chloe he can’t keep going. Hurt and feeling rejected, Chloe furiously runs out, straight into old habits of drinking and dancing her worries away.

JP pulls Chloe out of a bar one night to confront her about her poor decisions, but she won’t listen to him and continues with her hedonistic pursuits. JP, meanwhile, is incredibly stressed over a class he’s already failed once before. He’s studying to become a doctor like his dad. Though Chloe has seen right through him and his false enthusiasm for the profession, he insists it’s what he wants to do. However, as the movie progresses, JP puts off studying more and more by playing video games and binge-drinking. He even refuses to play in the basketball game, apparently giving up everything that requires a commitment from him.

Zech, upset that he seemingly ruined his chances with Chloe, returns to church. There, he opens up a Bible and gazes pensively at the cross, though it’s unclear what he is searching for there.

In Mexico, Dawn is slowly but surely growing to like Tony, whom she once found shallow and annoying. He shows he is chivalrous by fighting off three men who try to make her, and that he is virtuous as he stops her on their wedding night from making any moves. He tells her they should take things slow, even though they are technically man and wife. Dawn also learns a bit about Tony’s back-story, giving her confidence to reveal her personal struggles and why she volunteered to elope to Mexico with a man she didn’t particularly like. The scenes between the two of them are especially poignant, and impeccably acted.

Despite Dawn’s strong, albeit rash, desire not to go home at all, Tony is determined to get back in time for the championship game. The night they return, Dawn is left alone in her apartment after a disagreement with Tony regarding pills she refuses to surrender. Her ex-boyfriend shows up unannounced. It’s implied he’s about to rape her. Suddenly, Tony bursts through the door just in time to pull the man off of her. Dawn then tells Tony to leave and immediately melts onto the floor in tears while simultaneously sinking into her darkest valley of depression yet.

Putting Dawn’s needs ahead of the basketball game and those expecting him to play, Tony attends to Dawn, just as a husband should. By showing her love instead of anger or judgment, Tony further wins her heart and helps restore her health. Dawn says that Tony gave her hope. This reflects a Romantic worldview that another person can provide our salvation.

JP, having been swayed by a Bible verse sent to him by Chloe, decides to take a break from school and focus on what really matters to him, or at least find out what does. Meanwhile, Chloe accepts Zech’s apology for bringing her sadness, and tells him that “love covers all wrongs,” which echoes 1 Peter 4:8.

Overall, BOUNCE PAST is a positive movie with an understated, yet powerful, Christian worldview that champions chastity, hope, courage, and taking responsibility for one’s actions. However, before the positive resolutions of the major and minor plot problems, it contains some tough content, including brief foul language and references to lust, underage drinking and other mature themes. So, extreme caution is advised for BOUNCE PAST.