"Teenage Comedy About Rivals and Reconciliation" 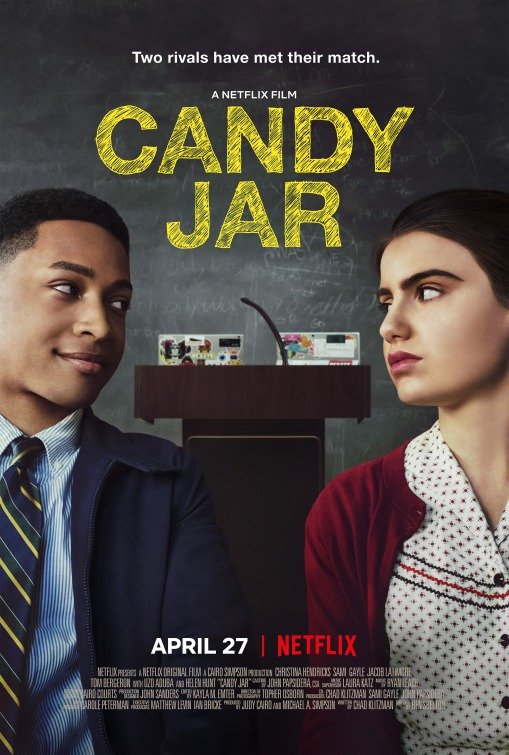 CANDY JAR, an original teenage comedy from Netflix, explores themes of growing up, ambitious dreams, and finding yourself. Lona and her fellow debate champion Bennett are high school seniors who’ve been rivals their entire lives. They’re both isolated from their peers and focused on getting into their respective Ivy League school choices. Both share close relationships with their single mothers, who were also high school rivals. The story focuses on Lona and Bennett forcing themselves to get along, so they can win a debate championship, but they discover they have more in common than they think.

CANDY JAR is a predictable but cute and engaging movie for viewers who want an easy, feel-good movie. There is some reconciliation at the end when the main characters realize how selfish they’ve been. However, most of the movie focuses on being in control of your own destiny and fulfilling earthly dreams as the best path toward happiness. CANDY JAR has four strong profanities and several gratuitous obscenities, including one “f” word. There’s also a brief reference to getting high. So, MOVIEGUIDE® advises strong or extreme caution.

(RoRo, B, C, H, LL, S, DD, M):
Dominant Worldview and Other Worldview Content/Elements:
Strong Romantic worldview supporting personal dreams dominates, with some moral, redemptive elements where selfishness and slander are rebuked, and reconciliation is promoted, but the movie also has some humanist elements where humans control their destiny rather than God and His Word, the Bible;
Foul Language:
Eight obscenities (including one “f” word), two strong profanities (two using Christ’s name and two GDs), two light OMG profanities, one obscene gesture, and three scatological references;
Violence:
None;
Sex:
No sex scenes but at least one sexual innuendo, there are small hints at kissing and relationships being important to the high school experience, and one kiss is shared between the two main characters but is very mild and tasteful;
Nudity:
No actual nudity, but one scene includes an innuendo that hints at a dress being taken off in a sexual context;
Alcohol Use:
None;
Smoking and/or Drug Use and Abuse:
No smoking but a brief reference to getting “high”; and,
Miscellaneous Immorality:
Strong miscellaneous immorality such as strong themes of greed, moral relativism, blackmail, gossip, slander, bad role models, and dysfunctional family portrayals, some of which is partially rebuked.

CANDY JAR, an original teenage comedy from Netflix, explores themes of growing up, ambitious dreams and finding yourself. It’s a breezy, cute romantic comedy about two high school rivals on the debate team who find romance, but CANDY JAR has some strong foul language and a non-Christian perspective overall.

Lona (Sami Gayle) and her fellow debate champion Bennett (Jacob Latimore) are high school seniors, who have been rivals their entire lives. They are both isolated from their peers and are focused on getting into their respective Ivy League school choices. Both share close relationships with their mothers who are both single yet for different reasons. The mothers were high school rivals who passed their competitiveness on to their children. Bennett is the adopted son of Julia (Uzo Aduba), an ambitious and driven state senator, while Lona is the daughter of Amy (Christina Hendricks), a coffee shop worker who struggles to make ends meet and is still wishing for the glory days of high school.

Aside from their mothers, the two teenagers find a confidante in their school’s counselor Kathy (Helen Hunt), who always has excessive amounts of candy in her office. The rest of the movie focuses on the rivals forcing themselves to get along, so they can win the debate championship, but they discover they have more in common than they had think.

While some of CANDY JAR is predictable, there are a couple surprise moments in the plot that make the movie engaging until the end. The characters are flawed in a familiar way, and they are perfectly cast. Chad Klitzman’s script is funny and touching, and the cinematography is an excellent canvas for the soundtrack behind it.

Content wise, CANDY JAR has more language and profanity than is needed, so younger children should be cautious. The movie focuses on the earthly realm more than the eternal, sending the message that this world is the only chance people get to be their best selves. Lona and Bennett spend their entire lives and waste their high school experience by overly studying and isolating themselves from their peers in an effort to get into Ivy League schools. There is some reconciliation at the end when the main characters realize how selfish they’ve been. Yet, most of the movie focuses on being in control of your own destiny and fulfilling earthly dreams as the best path toward happiness. There is no mention of the hope that Christ offers in a “well that never runs dry.”

CANDY JAR is a cute movie for viewers who want an easy, feel-good movie. However, it comes up short by neglecting the dreams God has for us in favor if the personal dreams we have for ourselves. There are also four strong profanities and one “f” word in the foul language count for CANDY JAR. So, strong caution is advised.