"Encourage One Another and Build Each Other Up" 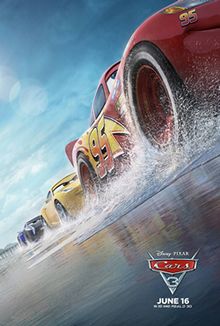 CARS 3 opens with our hero, Lightning McQueen, finding it harder and harder to stay in the number one spot. Lightning McQueen is used to winning, but one day, a new car named Jackson Storm races and beats him. When this starts to be a pattern, McQueen is crushed, but with the support of his family and friends in Radiator Springs, he continues training so he won’t have to retire. Is Lightning McQueen a burned-out racer; and, Can he come back to win?

Pixar and Disney’s new animated movie, CARS 3, is a fun, entertaining, adorable movie for the whole family. The movie is well-produced, and the animation and special effects are top notch. There are some heartfelt, poignant moments and plenty of laughs. CARS 3 has a strong moral worldview about supporting and helping others to accomplish their dreams. As such, it reflects the biblical message of 1 Thessalonians 5:11, which says, “Therefore, encourage one another and build each other up.” Overall, the whole family will enjoy CARS 3, though there’s a big crash scene that may scare little children.

(BBB, C, V, M) Very strong moral worldview with some redemptive elements includes character learns how to support others and how to apologize and seek forgiveness; no foul language or profanities; car crash with fire, one car is trying to run over the other cars; no sexual content; no nudity, characters go to a ‘oil bar’; no smoking nor drug use; and, one character suggests another character meditate, but it’s more of a joke than a serious suggestion.

In CARS 3, Lightning McQueen is finding it harder and harder to stay in the number one spot. CARS 3 is a fun, entertaining movie for the whole family with strong moral lessons.

Lightning McQueen has always been the top place as a racer. He beats out his other friends, who have been racing for almost as long as he has.

One day, though, another racer named Jackson Storm races past McQueen and wins the race. McQueen has never seen Jackson Storm before, but he’s younger, faster and more aggressive then McQueen. Suddenly, Storm is winning every race, and McQueen’s buddies start to retire while McQueen himself is not doing well.

Now, Storm has started to psyche out McQueen, who’s beginning to think he’s too old and needs to retire. On one of the last races, McQueen flips out and is seriously damaged. He needs time to recuperate, but during that time he becomes depressed, still thinking that perhaps he is too old to race.

Happily, McQueen’s friends in Radiator Springs, including Mater and Sally, help him regain his confidence. He speaks to his sponsorsm and they tell him to come to Florida to train for a Florida race. So, McQueen gets on the road, but when he arrives he learns his sponsors have passed the sponsorship on to a new guy named Sterling. Sterling has built a huge facility to train McQueen and future racers on McQueen’s team. The facility is state of the art and the main trainer is named Cruz Ramirez. Cruz is a big fan of McQueen’s but wants the chance to make him an even better racer. With all this new technology, McQueen doesn’t know if he will make it in the new, supercharged world of racing.

CARS 3 is an adorable animated movie follow-up to the wonderful CARS 2. The CGI effects and animation are done extremely well, with some landscape scenes even looking like actual landscapes. The movie has some heartfelt moments and plenty of laughs.

CARS 3 has a strong moral worldview about helping others do well. The main characters have to learn to get along and learn how to work together. McQueen has a supportive community, but he also has to learn how to support others, admit when he’s being mean and seek forgiveness. These positive lessons reflect the biblical message of 1 Thessalonians 5:11, which says, “Therefore, encourage one another and build each other up.”

Ultimately, the entire family probably will enjoy CARS 3, though there are some car crashes that may scare very little children.