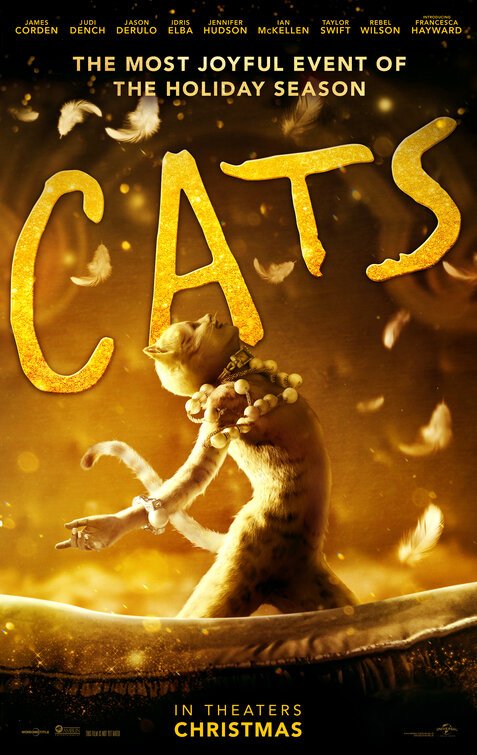 CATS is the musical tale of multiple cats in a city trying to be the one cat chosen to go to Heaven to be reborn. Based on the Broadway musical by Andrew Lloyd Webber, the movie has a morally uplifting storyline about the destruction of ego, but it is a bit obtuse in lyrics. In the story, Victoria is a cat who’s been discarded in an alleyway. Victoria is introduced to cat after cat trying to be reborn. Victoria takes interest in all of these cats, with an innocent, loving, compassionate attitude.

CATS is a big-budget movie, with lots of CGI effects and big named actors and singers. Overall, the movie is entertaining and has great musical performances. CATS is based on a series of children’s poems, written by T.S. Eliot. Eliot wrote “Old Possum’s Book of Practical Cats” for his godchildren, after his radical conversion to Christianity. Thus, CATS is like a Christian morality tale. Keep in mind that the movie was originally a winsome Christian poem for children, then you can enjoy watching CATS in a fun, comical way.

(CC, BB, O, V, A, M):
Dominant Worldview and Other Worldview Content/Elements:
Strong Christian, moral worldview where cats compete for the one special cat who will go to Heaven and be reborn, with multiple crosses shown in a cemetery, forgiveness and salvation are granted, kindness and compassion are rewarded, and immorality is rebuked, including taking advantage of others, gluttony, stealing, and being egocentric, plus one character uses magic
Foul Language:
No foul language, one cat character spits a hair ball at another cat character
Violence:
cat falls from a great height
Sex:
No sex scenes
Nudity:
No nudity
Alcohol Use:
Drinking
Smoking and/or Drug Use and Abuse:
No smoking or drugs; and,
Miscellaneous Immorality:
Lying, deceit, gluttony, and theft but all seen as bad.

CATS is the tale of multiple cats in a city trying to be the one cat chosen to go to Heaven and be reborn. CATS is a big budget movie that tries to put a storyline to the popular Broadway musical by Andrew Lloyd Webber, from a book of poems by Christian writer T.S. Eliot, one of the best acclaimed poets of the 20th Century.

CATS starts out with a cat being discarded in an alleyway. Other cats come out to see what this cat is all about, whose name happens to be Victoria. Victoria is learning about the cats around her, who are all very different. In fact, the movie is almost entirely about Victoria meeting different cats with different personalities.

When Victoria meets a cat named Macavity, she’s intrigued. He lures her with his song and movements, but the other cats warn her that Macavity is just out for himself. Macavity is trying to become the chosen Jellicle cat who’s taken up to Heaven and given new life.

Grizabella is a cat that used to be the top of the cats, before she was lured by Macavity into the dark side. After this, she became a street cat, rejected by others and walking the streets alone in torn clothes. Victoria sees her and wants to take pity on her, though the other cats discourage her.

The other cats that come along are either thieves, glutenous, womanizers, or have an incredible ego. Victoria takes interest in all of these cats, with an innocent, loving, compassionate attitude. However, each of these cats want to get reborn, to bring them new life.

CATS is a big budget movie, with lots of CGI effects and big-named actors and singers. This is apparently an attempt to lure in the movie audience, because the Broadway musical is notorious for not having a very clear or interesting plot. Overall, however, this is effective, because the movie itself is entertaining, with great musical performances. For example, Jennifer Hudson gives an incredible performance of “Memories, the most popular and perhaps best song of the musical play. Some of the costumes and choices in actors may seem a bit comical, to which you wonder if the filmmakers intended a bit of underlying comedy.

CATS is based on a series of children’s poetry written by T.S. Eliott, one of the greatest poets ever. Eliott wrote “Old Possum’s Book of Practical Cats” for his godchildren, after his radical conversion to Christianity. The wording in the lyrics of the songs are a bit obtuse, which makes sense in the bases of a poem, but some viewers may be slightly confused.

CATS has an interesting Christian, moral worldview that plays like a morality tale. The movie shows the destruction of ego, gluttony, avarice, and those who are lured by the Devil into a worldly lifestyle. The character that is said to have been lured by the Devil, is living in regret and remorse for the life she chose. Ultimately, forgiveness is granted and innocence, compassion and kindness to others are rewarded.