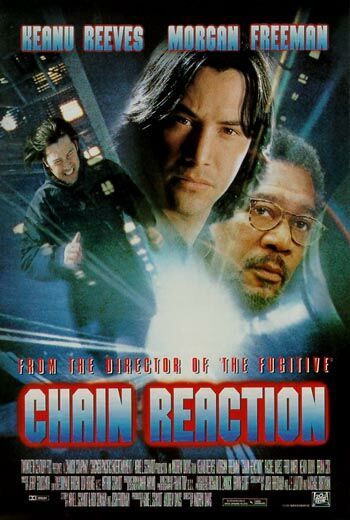 CHAIN REACTION is a science fiction movie starring Keanu Reeves as a young scientist who finds out how to create unlimited energy from water. The villains frame Reeves as they strive to control this power exclusively. Containing no nudity, nor sex, it does have some bloodless violence. Regrettably, it is a shallow, though well-intentioned movie.

Keanu Reeves plays a man on the run in the science fiction thriller CHAIN REACTION. Like THE FUGATIVE, it is about an innocent man pursued for a crime. Reeves plays Eddie, an unscrubbed machinist who works at a University of Chicago on a very important experiment: creating an unlimited and powerful energy source from water. Funding the project is the rich man of questionable ethics, Paul Shannon. When the lab blows up, Eddie and physicist partner Lily become suspects of mayhem. Innocent, they flee to Shannon, who encourages them to surrender to the authorities, but Eddie smells trouble so he and Lily go on the run with the FBI in chase. As they run, they discover that Shannon is leading a team of subversive U.S. government officials who wish to use the new technology for economic advantage.

This movie features poor special effects and a lot of boring chase scenes. The only quality performance comes from Morgan Freeman. His is bearing demonstrates complexity and seriousness, but he can’t rise above the written word. The movie doesn’t have any sex nor nudity, has less than 25 total obscenities and profanities, and the violence remains bloodless. Yet, the end result is a shallow, vacuous thriller that might only please a narrow teenage-audience.