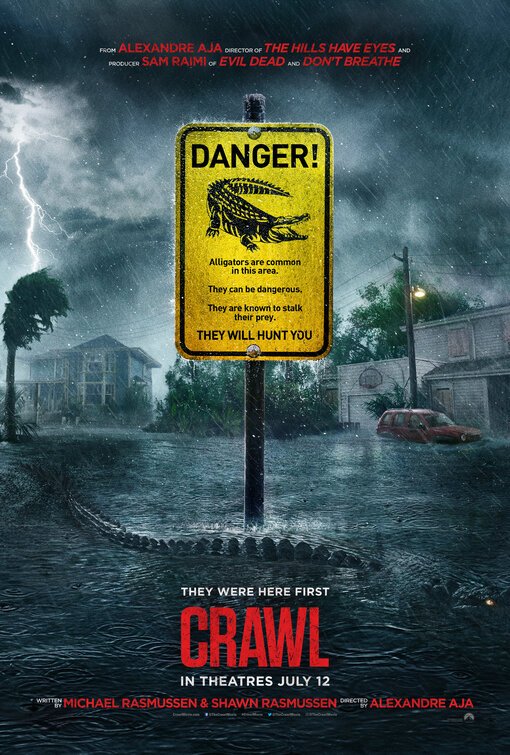 CRAWL is an intense thriller about a young woman and her father trying to survive alligator attacks during a Florida hurricane. Haley, who’s on her college’s swim team, finds her missing father unconscious in the crawlspace under their family’s old home. Using a tarp, Haley tries to drag him to safety, but they encounter and barely escape a snarling alligator. Eventually, as the hurricane waters rise, more alligators appear. Will Haley and her father survive? Also, what about the family dog, who’s barking furiously on the first floor?

CRAWL is incredibly intense and very scary. Veteran actor Barry Pepper and relative newcomer Kaya Scodelario do a superb job as the father and daughter. Their relationship is one of the movie’s best parts. CRAWL has some intense violence between the alligators and the humans. Sometimes, the violence and its effects are very strong, such as a few images of alligator wounds, and people having their bodies bitten. It’s bloody but not extremely graphic, though definitely R rated. CRAWL has lots of strong foul language, including three “f” words. So, MOVIEGUIDE® advises extreme caution for CRAWL.

(BB, LL, VVV, S, M):
Dominant Worldview and Other Worldview Content/Elements:
Strong moral worldview as a father and daughter try to stave off alligators during a Category 5 hurricane in Florida, with one positive reference to God and strong family bonds are extolled
Foul Language:
17 obscenities (including three “f” words and some “s” words), one GD, and six light profanities
Violence:
Lots of intense, scary violence and tense situations, with some very strong violence with some blood as alligators are shown attacking people’s bodies and limbs plus a father and daughter try to survive and avoid alligators during a massive hurricane, such as part of an arm is bitten off (there is some blood and a tourniquet is applied), a character sets a broken leg bone using a tool like a wrench with some cloth and a string, young woman encounters a couple corpses as she tries to use a tunnel from which some alligators entered her family’s old house, woman swims past alligators in flood waters, woman tries to avoid alligator that’s entered a bathroom with a glass enclosed shower, a tree suddenly smashes through a window, blood in the flood waters as alligators kill several people, alligators shown swimming after people as people try to get away, man has a bloody wound near his right shoulder, alligators grab people (some escape, others don’t), etc.
Sex:
No sexual content but a couple mentions of a boyfriend and a brief mention in one scene of a woman’s father catching her sister with a boy
Nudity:
No nudity
Alcohol Use:
No alcohol use
Smoking and/or Drug Use and Abuse:
No smoking or drugs; and,
Miscellaneous Immorality:
Brief talk about a divorce and father lies to daughter in one scene about a house still being in escrow but later confesses that the people trying to buy the house have seemingly backed out of the deal.

CRAWL is an intense thriller about a young woman and her father trying to survive alligator attacks during a hurricane in Florida. CRAWL has some fine acting, many intense, scary thrills, and a touching father-daughter relationship, but there is some extreme violence and strong foul language that warrant extreme caution.

The movie opens with Haley, a co-ed student at the University of Florida coming in second at a practice session for the swim team. Haley gets a call from her sister, Beth, in Boston. Beth is worried about their father, who’s not answering her calls like he usually does. Although there’s a vicious hurricane approaching, Haley decides to travel to their father’s house in Gaines to check on him. All she finds is her father’s dog.

So, with the winds and the rains picking up steam, Haley travels with the dog to their old family home, which the father was trying to sell after he and Haley’s mother divorced recently. She finds her father’s smart phone in the kitchen with the father nowhere in sight. However, the dog starts barking at the top of the stairs leading to the crawlspace underneath the house. Braving the damp muck under the house, Haley finds her father unconscious in a remote area of the crawlspace behind some pipes. He has a vicious wound near his right shoulder and broken right leg.

Using a tarp, Haley tries to drag her father to safety, but they encounter a snarling alligator. They barely make it back to the remote area behind the pipes, which prevent the alligator from reaching Haley and her father. Eventually, her father wakes up, but a couple more alligators show up. Also, the water from the hurricane starts to flood around the house and in the crawlspace. Will Haley and her father survive? And, what about the dog, who’s still barking at the top of the stairs?

CRAWL is incredibly intense and very scary. Veteran actor Barry Pepper and relative newcomer Kaya Scodelario do a superb job as the father and daughter. Their strong relationship is one of the movie’s best parts. Its emotionally compelling and uplifting. In addition to the scares, CRAWL has some very intense violence between the alligators and the humans. Sometimes, the violence and its effects are very strong, such as a few images of alligator wounds, and people having their bodies and limbs bitten by alligators. It’s bloody but not extremely graphic, though definitely R rated. CRAWL also has lots of strong foul language, including three “f” words.