"A “Tail” of Loyalty, Unconditional Love and Sacrifice" 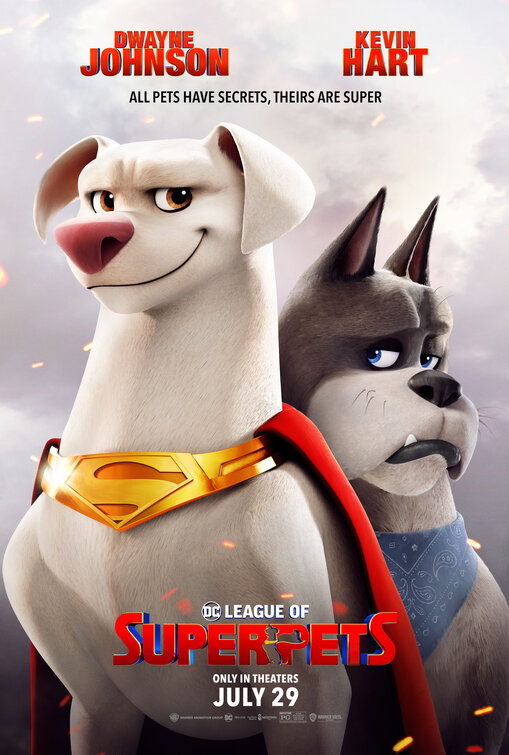 DC LEAGUE OF SUPER-PETS is a comical animated adventure involving Superman’s dog, Krypto, and his misfit shelter friends who get superpowers. The super-pets fight to save Superman from Lex Luther’s former laboratory guinea pig, Lulu, who kidnaps Superman. They try to get help from the Justice League of superheroes, but they too are captured and imprisoned by Lulu. It’s now up to Krypto, who has momentarily lost his superpowers after eating kryptonite poisoned cheese, and his zany animal shelter friends to save Superman and the entire Justice League.

DC LEAGUE OF SUPER-PETS is an amusing, lively adventure full of heart and soul. Krypto loves Superman unconditionally. He’ll do anything for him. The shelter pets discover their gifts through friendship and teamwork. The movie promotes positive Christian, moral values such as sacrifice, loyalty, truth, and justice. However, SUPER-PETS has some crude potty humor, a few innuendoes, scary images, a few bleeped obscenities, and an implication that Lois Lane spends the night at Superman’s house. Finally, one scene refers to two women being “engaged.” So, MOVIEGUIDE® advises caution for older children and media-wise viewers.

(CC, BB, Ho, V, S, N, A, M):
Dominant Worldview and Other Worldview Content/Elements:
Strong Christian, redemptive worldview with strong moral elements include main character talks about unconditional and sacrificial love, and acts accordingly, themes accent the fact that each character possesses unique gifts and talents that can be discovered and developed through teamwork and friendship, loyalty and truth and justice are extolled, and movie highlights the honor of fathers when Krypto seeks answers from his father, but two women are seen together and said to be engaged
Foul Language:
No overt foul language, but there are a few bleeped-out obscenities, some harsh words like dork and loser and poop, and some potty humor
Violence:
Light action related violence include laser shots and explosions, cars crash, main character’s dog friend is hit by objects and shocked, characters get hit by cars but aren’t injured and no one dies
Sex:
It’s implied in brief dialogue that Lois Lane sometimes sleeps over at Clark Kent/Superman’s place, a female turtle is looking for love and says a few light sexual innuendos such as she says to a Garfield the cat toy when they’re trapped in a car, “What’s happening, handsome? C’mon! We’re both grown-ups!” and she also “comes on” to a hard hat that she thinks is a turtle, two women are said to be engaged in one scene, and Superman and Lois Lane kiss
Nudity:
Upper male nudity when man in bathtub is interrupted by peril a few times
Alcohol Use:
Lois and Superman drink wine in one scene
Smoking and/or Drug Use and Abuse:
No smoking or drugs; and,
Miscellaneous Immorality:
Villain kidnaps heroes.

DC LEAGUE OF SUPER-PETS is an entertaining animated adventure of Superman’s dog, Krypto, and his new friends from an animal shelter.

Superman and Krypto possess the same superpowers. When Superman is kidnapped, and Krypto loses his powers, the loner Krypto must depend on his rather odd animal shelter friends, who get their own new superpowers for help.

DC LEAGUE OF SUPER-PETS opens with Krypto and his owner Superman. The two are best friends and inseparable until Superman falls in love with Lois Lane. A scorned Krypto sulks when Superman misses the usual popcorn eating night of THE BRITISH BAKE-OFF PROGRAM, to go out on date with Lois Lane. While Krypto “processes” his situation, Superman is kidnapped by Lex Luther’s “wanna-be” pet, the mad scientist’s guinea pig, Lulu. Lulu has super powers after Lex Luther’s experiments. She has a grudge against Superman because he saved her from the lab but placed her in an animal shelter.

Lulu breaks out of the shelter to save Lex Luther from prison. Before she leaves her animal shelter friends to die, she inadvertently gives them superpowers. At the same time, Lulu robs Krypto of his powers by poisoning him.

The only chance Krypto has of helping his best friend Superman is to employ the help of the new super shelter pets. There’s a dog with super strength named Ace, a turtle with super speed named Merton, a pig who changes sizes named PB, and Chip, a squirrel with electric powers.

At first, the shelter animals don’t want to help Krypto because he’s been an arrogant snobbish loner in the past. However, he makes a deal to lead them to a farm later, in exchange for their help.

The new super-pet league looks for help from the other superheroes, but things become even worse when the entire Justice League is held captive. Superman, Wonder Woman, Batman, Green Lantern, Aquaman, and The Flash are all held in an unbreakable prison, which is rigged with a bomb.

Lulu becomes too powerful for anyone to overcome. There’s only one move left for Krypto, but it will cost him his life. What will he do for someone he truly loves?

DC LEAGUE OF SUPER-PETS is an amusing, lively adventure full of heart and soul. It promotes positive values like sacrificial love, loyalty, sacrifice, truth, and justice. There are “throwbacks” to the past, and some of the humor will be missed by children but will keep adults laughing. SUPER-PETS has some scary images, cruel behavior by the villain and light action-related violence. It also has some crude humor, a few innuendos, a few bleeped obscenities, an implication that Lois Lane spends the night at Superman’s house, and a scene where two women are said to be engaged. So, MOVIEGUIDE advises caution for older pre-teenage children and media-wise viewers.