DID YOU HEAR ABOUT THE MORGANS? 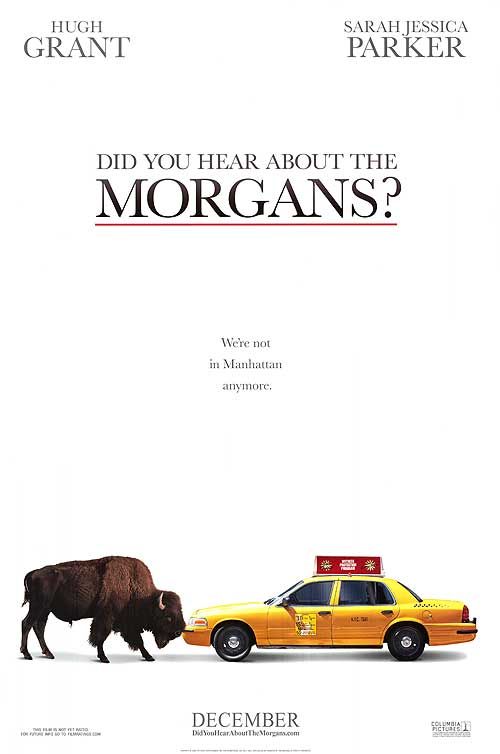 In DID YOU HEAR ABOUT THE MORGANS?, an estranged married couple in New York, Paul and Meryl Morgan, witness a contact killer murder one of Meryl rich real estate clients. The FBI places them in a temporary protection program, while they search for more permanent places. The agents put them under the care of an older U.S. marshal and his wife, who’s also the Marshall’s deputy, for a week, in a very small rural Wyoming town. The rest of the movie involves Paul and Meryl trying to decide if they should get back together. Meanwhile, the killer starts tracking them down by bugging Meryl’s office in New York.

DID YOU HEAR ABOUT THE MORGANS? is a breezy, funny, and heartfelt comedy. Though somewhat predictable, the movie’s dialogue and acting enliven the story. The cast does a good job, including Hugh Grant, Sarah Jessica Parker, Sam Elliott, and Mary Steenburgen. DID YOU HEAR ABOUT THE MORGANS? has a strong moral worldview that promotes biblical, Christian values like family, marriage, adoption, forgiveness, and reconciliation. MOVIEGUIDE® advises caution for older children because of many light profanities, some strong obscenities, and a subplot about marital infidelity.

(BB, C, PP, LL, V, S, A, M) Strong moral, pro-children, pro-adoption worldview about healing a broken marriage, in a comical setting, with some issues stressing the Christian, redemptive, biblical values of forgiveness and reconciliation after having sinned against someone, plus some implied patriotic, pro-American values of transcending cultural and political differences (at least for a while) in order to meet common positive goals of goodness, including a generally positive view of the FBI and law enforcement; nine mostly light obscenities (two “s” words), no strong profanities, 21 light exclamatory profanities (a few somewhat borderline), and three or so appeals to God; brief violence includes man with knife in back falls from balcony, killer shoots agent wearing bullet proof vest in chest and knocks him down, man hit in head with a thrown object, killer and potential victim trade gunshots, and people hold guns on killer; very light sexual content and references include no depicted sex but implied married sex when husband shuts bedroom door of place where he and estranged wife are staying, verbal references to an instance of adultery in the past, and brief verbal references to sleeping with another person; no nudity; implied alcohol use and mention of getting drunk leading to an immoral act, but no drunkenness depicted; and, cheating rebuked, bingo playing in one scene, and estranged married couple bickers and argues but reconciles, plus some jokes about Democrats and Republicans in “Red State” and “Blue State” areas, with a light joke about Sarah Palin and guns, but not meant in a mean politically correct, offensive way (the urban liberals are actually helped by the more conservative “Red State” people).

DID YOU HEAR ABOUT THE MORGANS? is a breezy, funny, and heartfelt comedy about a man trying to heal his broken marriage. The movie presents a modern twist on the classic story of the city mouse visiting the country mouse.

Starring Hugh Grant and Sarah Jessica Parker, the movie opens with Paul Morgan, a high-class lawyer in New York City, trying to seek forgiveness from his estranged wife, Meryl, who caught him cheating once on her. A successful real estate broker, Meryl agrees to have dinner and talk. Paul walks Meryl to her next appointment, where they see a contract killer murder her new client, who turns out to be an international arms dealer working with the FBI.

The killer sees their faces, so the FBI places them under the witness protection program. Before they can find permanent places for them, however, the FBI agents put them under the care of an older U.S. marshal and his wife, who’s also the Marshall’s deputy, for a week, on the woodsy outskirts of a very small Wyoming town.

The rest of the movie shows Paul and Meryl comically trying to rekindle the love and trust in their marriage and decide if they really should get back together. Meanwhile, the killer is trying to track them down by bugging Meryl’s office in New York.

DID YOU HEAR ABOUT THE MORGANS? is funny and heartfelt. Some of the comedy involves the Morgans trying to get used to the ways of the folk in rural Wyoming. Other comic bits involve Paul and Meryl trying to get past their own bickering ways.

Though somewhat predictable at times, the movie’s dialogue and acting enliven the story. Hugh Grant and Sarah Jessica Parker do a great job as Paul and Meryl. Sam Elliott and Mary Steenburgen give fine support as the marshal and his gun-loving wife. The great Wilford Brimley, an American icon, plays the curmudgeonly owner of the small Wyoming town’s only restaurant.

DID YOU HEAR ABOUT THE MORGANS? has a strong moral worldview that promotes biblical values like family, marriage, adoption, forgiveness, and reconciliation. The negative consequences of drinking too much and infidelity are also addressed, but in a light manner. Finally, the movie acknowledges the cultural and political differences between the apparently liberal married couple and the more conservative, Republican people in rural Wyoming, but in a comical way where both sides transcend their differences. In fact, the more conservative people actually help the liberal married couple in a couple major ways.

MOVIEGUIDE® advises caution for older children because of too many light profanities, a couple “s” words, and the movie’s subplot of marital infidelity. The movie’s main focus, including its premise, is positive enough to transcend those objectionable elements, however.

Rent or Buy DID YOU HEAR ABOUT THE MORGANS?: