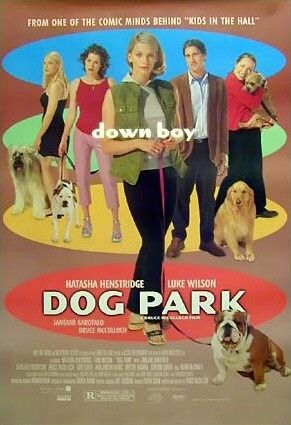 The excruciating DOG PARK, an alleged romantic comedy, lives up to its name: it's a dog of a movie. When Andy loses his girlfriend, he encounters a series of romantic disasters mainly revolving around the women he meets at Dog Park. DOG PARK is saddled not only with a mundane and depressing story, but also with unappealing characters and leaden dialogue.

The excruciating DOG PARK, an alleged romantic comedy, lives up to its name: it’s a dog of a movie. The movie represents Bruce McCulloch’s directorial debut. Until now McCulloch was known for his role as a Kid in Comedy Central’s sometimes-funny sketch comedy KIDS IN THE HALL. Presumably intended to be “quirkily endearing,” DOG PARK’s quirks fail to endear – instead they only rankle. McCulloch should stay in front of the camera, rather than behind it. DOG PARK is just plain odd, and uncomfortably so.

The movie’s dubious hero is the hapless Andy (Luke Wilson), a young writer of classified advertisements who has just been dumped by his girlfriend (Kathleen Robertson of TV’s BEVERLY HILLS 90210), who left him for another man (to use the term “man” loosely – this one has blue hair and multiple body piercings). Andy goes out on the make, looking for love in all the wrong places. He finds it disconcerting to be without a girlfriend – having never been single for any substantial length of time since the eighth grade – so he needs to find a new love interest quickly in order to avoid the uncharted territory of singleness. So, at a singles bar(!), he meets Lorna (Natasha Henstridge), whom he recognizes from “Dog Park,” where they both walk their dogs.

Lorna is a nice-enough woman who has just broken up with her boyfriend. (Lorna’s ex-boyfriend is soon revealed as Mr. Blue Hair, Andy’s ex-girlfriend’s new flame, but this little twist never serves any clear purpose in the plot.) She and Andy discover their mutual heartache, cry on each other’s shoulder, then go back to Andy’s place to make out. Mercifully, our charmless hero and heroine do not get far in their gropings. Lorna has apparently had too much to drink – despite never appearing the least bit tipsy – and ends up vomiting in Andy’s toilet while he chivalrously holds her hair. The next day, Andy tries to woo Lorna with roses, but, embarrassed by her drunken behavior, she spurns him.

So the complicated mating dance begins. Andy tries to forget Lorna and begins a purely physical relationship with the singularly distasteful Keiran (Kristan Lehman), an aggressive blonde who “buys” him at a “bachelor auction” for charity. Lorna, meanwhile, watches TV with her dog and goes out on an ill-fated date with an oddball she meets in a video store. All the while, Andy takes advice from Jeri (Janeane Garafolo), his co-worker and friend, who appears at first to be the only character in the movie with a healthy romantic life. Inexplicably, Jeri is madly in love with her effeminate, seemingly devoted boyfriend and wants Andy to share her committed bliss by meeting someone special of his own. Later, it is revealed, however, that Jeri’s boyfriend has done some betraying of his own and is having an affair with Lorna’s co-worker.

None of these coincidences and connections, by the way, seems to have much of a point. DOG PARK is saddled not only with a mundane plot, but also with unappealing characters and leaden dialogue. Mr. Wilson, so winsome in 1994’s independent comedy BOTTLE ROCKET, proves less than qualified to play the role of romantic hero. In BOTTLE ROCKET his clueless innocence was endearing; here it comes off as dead-eyed oafishness. The acerbically witty Janeane Garafalo is completely wasted in her role as the unfunny Jeri. Kathleen Robertson, surprisingly, shows a glimmer of comic promise, but her spark is also squandered in this movie-making debacle.

The rest of the unrecognizable cast seems to have been assembled from among the director’s out-of-work-actor friends. The willowy Ms. Henstridge is badly miscast; she is simply too Amazon-ish for her cutesy role. (Ms. Garafalo, so often shunted to the “supportive friend” role in these movies, would have made a much more likable heroine. Unfortunately, a twist so agreeable as the unexpected pairing of Wilson and Garafalo is too much to expect.) The remaining characters are simply odd, and not in any kind of quirkily endearing way. In several unfunny bits, for example, a dog psychiatrist celebrates dogs’ loyalty and devotion while ignoring his own dysfunctional family.

DOG PARK’s dialogue strains hard to be edgily whimsical. In more capable hands, it might have proven amusing. Instead, it just seems labored. The dogs of Dog Park are supposed to add a soup=E7on of cuteness to the entire affair, but even canines can’t save this cinematic ordeal. It is clear that a movie is doomed when even the dogs seem annoying.

Furthermore, DOG PARK affords a depressing glimpse of single life among the godless masses. These people are precisely the kind of people you would expect to find in singles bars, and serve as a good reminder why your mother warned you to stay away from such places. They hop from one sexual dalliance to another with hardly a backward glance. They shrug off betrayals of trust as if they were simply an unavoidable banality of single life. When Jeri laments her boyfriend’s cheating heart and the disintegration of her once-enviable love, she asks rhetorically, “What could have protected us? Nothing!” as if her relationship’s bitter outcome were simply inevitable. DOG PARK implies that everyone pairs together out of little more than loneliness, and that we all lie, cheat and leave each lover for someone “better.” Instead of a romantic comedy, DOG PARK slips from pathos into something more like bathos. May God spare us from this “happy ending.”