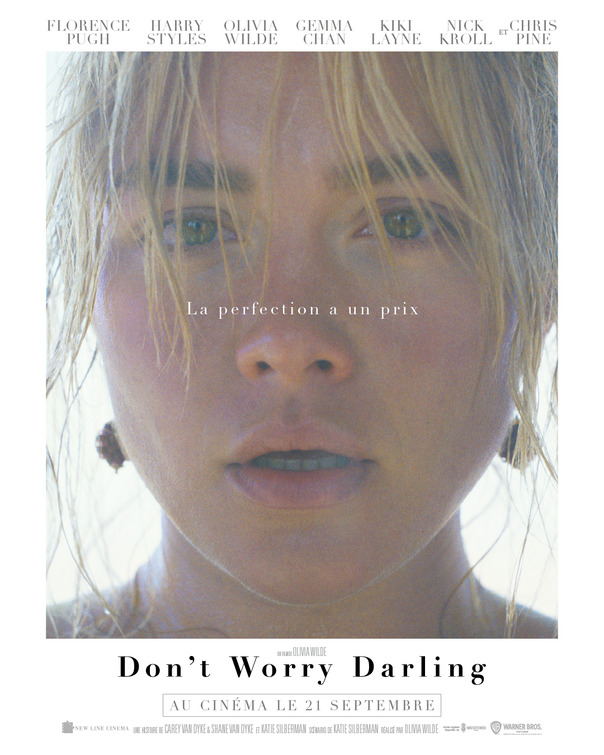 DON’T WORRY DARLING is a psychological horror thriller filmed in a “Twilight Zone” style. Jack and Alice Chambers seem to be a happy couple. They live in an idealized 1950s suburban community in the California desert. The community is part of the experimental Victory Project, run by a charismatic, controlling man named Frank. Cracks start to appear in Alice’s idyllic life. She begins having crazy, sinister, sometimes scary visions. Then, one of her female friends seems overcome by a severe case of paranoia. So, Alice starts to question what’s really happening in Victory.

Despite a long running time, DON’T WORRY DARLING is directed well and holds the viewer’s interest. However, some things are left unexplained or don’t quite make sense. For example, the movie’s ending leaves viewers hanging a bit. DON’T WORRY DARLING also has some strong foul language, including several “f” words, a lewd love scene and a professional dancer who performs a striptease at a community party. Finally, DON’T WORRY DARLING has a feminist, politically correct subtext that unfairly exaggerates, mocks and attacks American suburban life in the 1950s.

(HH, FeFe, PCPC, APAP, B, LLL, VV, SS, NN, AA, D, MM):
Dominant Worldview and Other Worldview Content/Elements:
Strong humanist, feminist, politically correct worldview and subtext that unfairly exaggerates, mocks and attacks the familiar idyllic 1950s images and depictions of suburban America (no churches or religious elements appear in the movie, however), plus one woman expresses commitment toward her children in a light but brief moral element
Foul Language:
11 obscenities (including six “f” words), one JC profanity and 16 light profanities such as OMG
Violence:
Strong and light violence with some blood in a few scenes such as woman on roof slits her throat (only a thin line of blood is shown), woman falls after slitting her throat, another woman rushes to the woman’s her side, woman stabs a man in the stomach, woman kills a man by smashing a glass against his head (some blood briefly shown), woman has a bloodstain on her clothes in the stomach area, it’s implied that a woman is knocked unconscious and then is dragged to a bed where she’s tied down, two men drag a distraught woman away, security guards in red clothes chase a woman, three cars crash and an explosion occurs, woman has a scary vision of a glass wall squeezing her against a regular wall (crunching sounds are heard, but the vision stops), cars chase woman in a car driving fast across a hard desert landscape, woman twice smushes her body against the glass door of a strange round building, and woman returns for a walk through a desert without her young son
Sex:
One lengthy scene of partially depicted oral sex between a married couple, passionate kissing in two scenes, a man secretly watches two married people passionately kiss, married man accuses a married woman of having sexual relations with him in his bedroom, but he may be lying
Nudity:
Some partial suggested female nudity when woman has a vision of falling into some pool water while wearing a nightgown and when a professional dancer takes off most of her clothes before sitting in a large champaign glass, plus there’s an image from behind of a woman who appears not to be wearing her bikini top at a pool
Alcohol Use:
Some alcohol use and brief drunkenness
Smoking and/or Drug Use and Abuse:
Some smoking but no drugs; and,
Miscellaneous Immorality:
Lying and deception (some of it is only apparent, so it may not have really occurred), scary and sometimes bizarre dreams and visions, some apparent gaslighting occurs.

DON’T WORRY DARLING is a psychological horror thriller, filmed in a “Twilight Zone” style, about a young housewife living in a stylized 1950s setting, who starts to think there’s something terribly wrong about her desert community, which is an experimental project run by a mysterious man named Frank. Despite a long running time, DON’T WORRY DARLING is directed well and holds the viewer’s interest, but some things are left unexplained or don’t quite make sense, and the movie contains strong obscene, lewd content and has a feminist, politically correct subtext that unfairly exaggerates, mocks and attacks the Mid 20th Century ideal of the American Family, which actually was a wonderful time and not as horrific a time as modern feminists and leftists depict.

Featuring a score that consists of 1950s pop songs, the movie opens at a wild party of married couples in a suburban community called Victory, in the California desert. The movie reveals that all the women are stay-at-home wives, and their husbands go off to work at the very same time every morning. The husbands also come home at the very same time each day because they all work at what seems to be a top secret underground government facility called the Victory Project. The facility and community are run by a charismatic, controlling man named Frank, who gives a short, optimistic lecture that’s broadcast every afternoon. Frank meets every person’s needs. All he asks is unquestioning loyalty.

Jack and Alice Chambers seem to be a perfectly happy couple. Unlike a few other couples in the community, they’ve decided to wait to have children so they can enjoy one another’s company.

However, cracks start to appear in Alice’s idyllic life. She begins having crazy, sinister, sometimes scary visions. For example, one day when she cracks some eggs, there’s no yolk inside. Then, one of her female friends seems overcome by paranoia. So, Alice starts to question what’s really going on in Victory.

Despite a long running time, DON’T WORRY DARLING is directed well and holds the viewer’s interest. However, some things are left unexplained or don’t quite make sense. For example, the movie’s ending leaves viewers hanging a bit.

DON’T WORRY DARLING has some strong foul language, including several “f” words. There’s also a lewd love scene between Alice and her husband Jack, plus a large party scene where Frank has a dancer take off some of her clothes and sit in a large champagne glass on a stage. Finally, the movie has a feminist, politically correct subtext that exaggerates, mocks and attacks the Mid 20th Century ideal of the American Family. American suburban life in the 1950s was actually a good, productive time for many people, including parts of America’s black population, despite the social, moral problems and conflicts that occurred at that time. Considering the sinful nature of every human being who ever lived, social, moral problems and conflicts should not be unexpected. Modern feminists and leftists, however, have Romantic, humanist, secular worldviews that misdiagnose the real problem and that don’t understand the metaphysical, philosophical, spiritual, and psychological foundations that underpin Reality, including human nature. Also, as many wise people have noted, they don’t value Truth and suffer from false assumptions, lack of knowledge and willful ignorance.