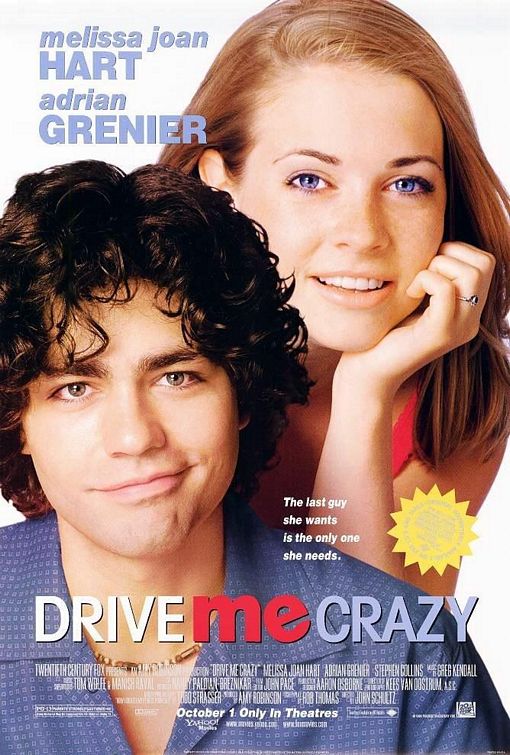 DRIVE ME CRAZY follows the plot of many current teen movies about a high society teenager eventually getting romantic with a geek. Melissa Joan Hart plays a popular high school senior who transforms her dark, brooding neighbor into a perfect prom date. Though it has its share of negative content including drinking and implied marijuana use, DRIVE ME CRAZY seems refreshing in that the protagonist's goal is not to lose his/her virginity.

Mixed worldview with pagan element of scheming teenagers & some moral elements of defending the weak, reconciliation & teenager identifies himself as a Lutheran; 18 obscenities & 3 profanities; mild violence including falls, girl uses mace on a would-be assailant & a brief scuffle where man is thrown against car & beaten; no sex but some heavy kissing, oogling & a few implied sexually active teens; men & women in swimsuits; implied teen alcohol use & teen vomits from drunkenness; a few characters smoke & briefly depicted marijuana use by an extra character; and, constant pranks.

Melissa Joan Hart has slowly built a following with her TV mainstay, SABRINA, THE TEENAGE WITCH. It is easy to see her work her way into feature film with a mild, predictable teen comedy. DRIVE ME CRAZY follows the plot of many current teen movies about a high society teenager eventually getting romantic with a freak or geek, the classic “Taming of the Shrew” story from Shakespeare. Though it has its share of negative content, DRIVE ME CRAZY seems a refreshing teen comedy in that the protagonist’s goal is not to lose his/her virginity. Two movies this summer, AMERICAN PIE, about teenagers, and AUSTIN POWERS, made for teenagers, both had their leads looking for sexual activity.

Nicole (Melissa Joan Hart) and Chase (Adrian Grenier) are neighbors, but worlds apart. She loves her high school career, diving into her classes and her extra-curricular activities with equal gusto. He wears dark clothes, doesn’t talk much and likes to go to protests and sip coffee in dark coffee houses. When Nicole’s basketball-playing boyfriend accidentally bumps into a cheerleader during a game, he dumps Nicole and starts dating the cheerleader. Meanwhile, Chase’s girlfriend dumps him. Hence, Nicole and Chase reluctantly join forces to date each other in a scheme to attract the interest and jealousy of their respective romantic prey.

In the process, Chase gets a make-over to a more clean-cut image, and Nicole visits some of Chase’s old haunts. They learn to appreciate the culture that each other appreciates. Eventually, conniving outsiders trap Nicole and Chase, exposing their pretend romance which temporarily foists them back in the arms of their old paramours. However, both Chase and Nicole realize that they love each other and don’t want to be back with their old relationships.

Dramatically, this movie covers well-trodden ground and adds little except to introduce two new fresh faces waiting to be regular film actors in the coming decades. (Adrian Grenier seems to be picking up the mantle of expressionless mysterious acting as seen by Val Kilmer.) Music, acting, directing are only serviceable.

Morally, this movie flirts with having a moral center, but doesn’t quite achieve it. Sex and nudity are refreshingly absent, but both Nicole and Chase drink alcohol. (The movie, however, never shows any beer cans or bottles of booze, but merely implies that the cups are spiked punch.) A few of their classmates are pot smokers, one is implied to engage in homosexual activities and all of them seem to engage in tomfoolery and deception to achieve their goals. Chase, in fact, is clearly branded from the start as a prankster.

Yet, Chase defends some of his unpopular friends, and he eventually decides to be honest about his feelings for Nicole. One character defends himself in saying that he is not in a cult, rather he is Lutheran. Meanwhile, Nicole is pursued by her formerly estranged father (MOVIEGUIDE® friend Stephen Collins, from TV’s 7TH HEAVEN) to have a better father/daughter relationship. Nicole learns to trust Chase more, while she learns her father also is trustworthy.

All of this nicety would bode for well for a better acceptability rating, but, at the very end, Chase’s single father and Nicole’s single mother tell their children that they are going to be “moving in together,” and Nicole and Chase run off to the treehouse, supposedly for some sexual activity.

DRIVE ME CRAZY will probably only drive the most emotional teenagers crazy. It is a standard, run-of-the-mill teen comedy with everything you would expect from a teen movie and nothing more. Be assured, if you miss this one, another one almost just like it will hit the screens in the coming year.

Writer: Rob Thomas BASED UPON THE NOVEL: HOW I CREATED MY PERFECT PROM DATE by Todd Strasser