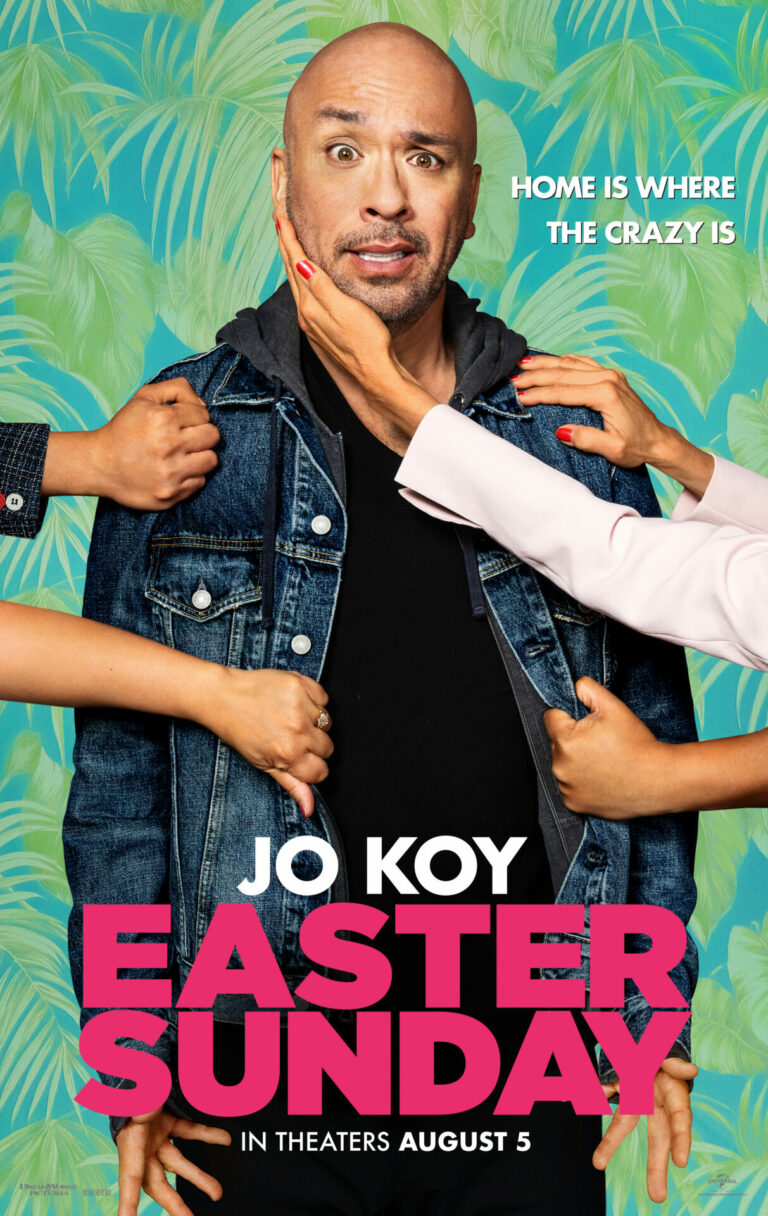 EASTER SUNDAY is a comedy starring popular Filipino-American comic Jo Koy. Jo is up for a big television part. He’s trying to make it in Hollywood and is gaining traction, but it’s Easter, and he needs to go see his family. When he arrives with his son, Junior, he finds his family is in total chaos, with his mother and aunt fighting, and his cousin owing a loan shark $40,000. Will Jo be able to help his cousin get out of debt before his family gets hurt? Will the family relationships be restored and differences be put aside?

EASTER SUNDAY is a funny, silly movie with some redeemable qualities. The movie has several hilarious scenes. EASTER SUNDAY has a strong Christian, pro-family worldview. There are comments about loving each other and about Jesus saving us from our sins, plus positive references to Church and prayer. However, EASTER SUNDAY has 36 obscenities and 18 mostly light profanities, including one “f” word and two Jesus profanities. EASTER SUNDAY also makes some jokes that teeter on the edge of being sacrilegious. MOVIEGUIDE® advises extreme caution.

(CC, BB, LLL, V, M):
Dominant Worldview and Other Worldview Content/Elements:
Strong Christian, moral, pro-family worldview, with mentions of Jesus and prayer, song about God, references to the Cross, a pastor turns sermon over to comedian and then he makes jokes about Jesus and God, and jokes are made about icons of the Baby Jesus
Foul Language:
36 obscenities (including one “f” word), two Jesus profanities, and 16 miscellaneous light
Violence:
Light violence includes some fist fighting and a gunshot, but the bullet doesn’t hit anyone
Sex:
No sex
Nudity:
No nudity
Alcohol Use:
No alcohol use
Smoking and/or Drug Use and Abuse:
No smoking or drugs; and,
Miscellaneous Immorality:
Some deceit occurs, but it’s but revealed and rebuked.

EASTER SUNDAY is a comedy about Filipino stand-up comic who’s up for a big television part, but when his family gets in the way, he has to go see them at the Easter family get-together. EASTER SUNDAY is a funny movie with some positive overt Christian elements, but it has excessive foul language, so it requires extreme caution.

Filipino stand-up comic Jo Koy is up for a great part in a television program, but they say he must do a Filipino accent to get the part. He decides to take his son, Junior, up to Northern California to see his mother and family. Now, Junior is in high school but isn’t doing well in school. Also, Junior feels like his father is constantly focused on himself.

When Jo and Junior get to the family house, they’re greeted by their family. Already, they hear about the tension in the house between Jo’s mother, Susan, and Jo’s Aunt. The two won’t eat together and don’t like to be in the same room together, but the one thing they do is go to Church together.

When the entire family gets to Church, the pastor tells Jo he should give the sermon since he’s a famous man now. Jo tells the audience we must love each other and get along with our families even if we are fighting.

This doesn’t last long, though, as Jo gets angry at his cousin, Eugene, for changing the food truck he invested in with Eugene. Also, Eugene loaned money from a bad man, Dev Deluxe, and owes Dev $40,000. Jo and Eugene are in deep trouble and must get Dev Deluxe his money by the end of the day. Otherwise, Dev promises he’ll end their entire family.

EASTER SUNDAY is a funny, silly movie with some redeemable qualities. The movie has some hilarious parts to it. Overall, it has a strong plotline throughout and is entertaining, but it’s not a big box office budget movie.

EASTER SUNDAY has some overt Christian, moral elements to it, with comments about loving each other, and about Jesus saving us from our sins. Despite this, EASTER SUNDAY has lots of foul language in it, including one “f” word and two Jesus profanities. Also, EASTER SUNDAY makes some jokes that teeter a bit on the edge of being sacrilegious. Overall, therefore, MOVIEGUIDE® advises extreme caution.