"Not Your Parents’ Wonder Woman" 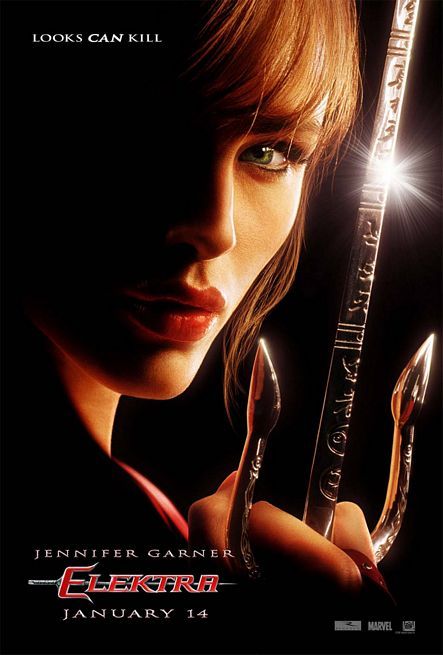 In ELEKTRA, Jennifer Garner of TV’s ALIAS stars as Elektra Natchios, the world’s foremost assassin, whose complicated personality and background intereferes with her latest assignment – the murder of a girl and her father (E.R.’s Goran Visnjic). However, Elektra has a change of heart while getting to know the girl, and instead helps them to escape from the other demon-powered hitmen sent to finish the job. Elektra seeks help from her old mentor, Stick (Terrence Stamp), and confronts her past mistakes in the process.

ELEKTRA, based on the Marvel comic books by Frank Miller, is reminiscent of earlier Marvel adaptations like DAREDEVIL, BLADE and THE INCREDIBLE HULK. On a technical level, the film is well done. Jennifer Garner is believable, but the continuous battles are numbing, and the villains are stock comic book characters. Also, unlike other Marvel projects such as SPIDER-MAN and SPIDER-MAN 2, which are more comfortable with portraying moral themes in a positive light, ELEKTRA teaches pagan mysticism and Eastern religions, and characters blatantly employ demonic protection. Parents and fans of Garner’s other works also should be forewarned that ELEKTRA contains very strong comic book violence and some foul language.

In ELEKTRA, Jennifer Garner (13 GOING ON 30, television’s ALIAS) plays Elektra Natchios, a top female assassin and mercenary. Her latest “assignment” is the murder of Mark Miller (E.R.’s Goran Visnjic) and his daughter, Abby (played by newcomer Kirsten Prout). However, Elektra gets to know the daughter and cannot shake off the connection they have when the time comes to kill them. She instead helps Mark and Abby to escape, and protects them as demon-powered assassins are sent to finish the job. Eventually, she must overcome the villainous head of these assassins.

Jennifer Garner is believable as Elektra, and on a technical level, the film is well done. Fight scenes are executed smoothly, but the continuous battles are numbing. To further mire the film in comic book clichés, villains are pulled from the standard quiver of comic-book-stock-character-evildoers, and the movie suffers for it.

Even more unbelievable, unfortunately, is the transformation Elektra goes through while with Mark and Abby Miller. After years of stoic, solitary existence and murder, one afternoon with Abby Miller, and Elektra is suddenly fully in touch with her inner child. This startlingly quick emotional thaw pulls hapless viewers out of the film. In another scene, mere moments after Elektra has decided that Mark and Abby are more trouble than they’re worth, she backtracks and throws her lot in with them, for reasons that are never fully explained. Moviegoers will tire of being asked to suspend disbelief and will be disappointed that this story never leaves the comic book realm.

ELEKTRA contains a mixture of misleading worldviews and false religious beliefs, including strong occult content. Elektra is told by her mentor that he “knew she was good, [she] just had to see it for herself.” Also, while being encouraged to do the right thing, she is told that “the good was inside her,” and “only the pure” succeed as she does. These statements belie the fact that people are fallen, and only through the saving grace of Christ are good things possible.