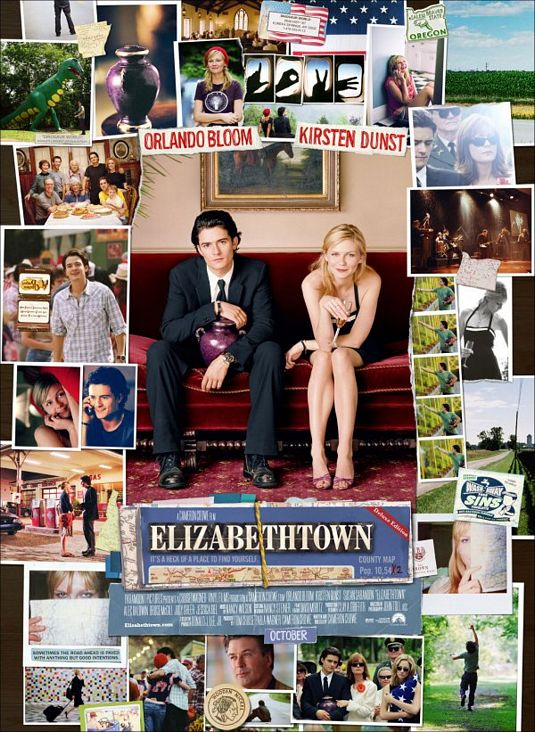 ELIZABETHOWN is a comedy about a young man from the West Coast who goes to visit his father’s side of the family in a little town in Kentucky after his dad suddenly dies while making one of his own regular visits. Orlando Bloom stars as Drew Baylor, a product designer who has just lost $1 billion for the shoe company that employs him. Drew goes home to kill himself, but just before he commits this heinous act, he gets the call about his dad’s death. While Drew gets reacquainted with his father’s side of the family in Elizabethtown, Kentucky, he begins a romantic relationship with the quirky, but pretty, stewardess who befriended him on his plane.

The dramatic and often comical personal journey that Drew takes in ELIZABETHTOWN is both funny and poignant. The story goes on a bit too long, however (over two hours), and its cutesy qualities overstay their welcome. Despite some mixed elements, ELIZABETHTOWN has a light Christian worldview. There are a couple positive references to Jesus and Drew’s journey is ultimately about gaining insight into different varieties of fulfilling love, including marital love, romantic love and love of others.

(C, BB, Pa, Ro, PP, LL, V, S, N, AA, DD, MM) Light Christian worldview about different varieties of fulfilling love, including marital love, romantic love and love of others, with a brief mention of Jesus in a prayer before a meal and some mixed pagan and Romantic content including implied fornication, man who has just failed in a huge way cynically says that success is the only god that the world serves, sons estranged from fathers, and there is no acknowledgement of sin, and pro-American elements in the movie honor and celebrate American life and American history; two “f” words, six other obscenities, six light obscenities, and someone exclaims, “God love him!”; movie shows dejected protagonist planning to commit suicide with a knife but his thought of suicide is interrupted and eventually dropped, children’s video repeatedly shows builder blowing up a house before he announces that he’s now going to build a house, video scenes of Civil Rights riots during 1960s at Martin Luther King memorial at hotel where he was shot and killed, and paper bird catches fire but sprinklers turn on to douse flames before anyone is hurt; very lightly implied fornication in one brief sequence; upper male nudity and woman sits in bubble bath while talking on phone; alcohol use and drunkenness in one scene, and implied drinking during party noise in hotel; smoking and verbal reference to getting high on an illegal drug; and, man steals beer from party when no one’s around, bride and groom hold several days of fun partying to celebrate their upcoming wedding (people are heard talking loudly and laughing at various times but there are no sounds of orgies or anything like that, just an assumption of lots of drinking), protagonist’s demanding job has separated him from his father and he seems unaffected by his dad’s sudden death, another father lectures adult son about letting his young grandson get away with too much, relatives separated by thousands of miles and different lifestyles have trouble relating to one another (but not in a really angry, accusatory way), and no apparent politically correct references, but Civil Rights movement in the 1960s is endorsed when man visits Martin Luther King memorial at Southern hotel where he was shot and killed although folksy white Southerners in small Kentucky town seem to be treated in a positive manner.

ELIZABTEHTOWN is a comedy about a young man from the West Coast who goes to visit his father’s side of the family in a little town in Kentucky when his dad suddenly dies while making one of his own regular visits there.

Orlando Bloom stars as Drew Baylor, a product designer who has just lost nearly $1 billion for the popular shoe company for which he works. Drew goes home to kill himself, but just before he commits this heinous act, he gets the call about his dad. His mom, Hollie, doesn’t want to go to handle her husband’s cremation, because she has never felt comfortable with the folksy Kentucky relatives. So, she sends Drew in her stead.

On the flight to Kentucky, the perky, pretty blonde stewardess, Claire Colburn, played by Kirsten Dunst, befriends Drew. She senses something is wrong because of Drew’s sad countenance, so she makes an extra effort to cheer him up with her own quirky manner. At first irritated, Drew eventually is bemused and attracted.

Drew and his father had grown apart because of Drew’s commitment to his job in Los Angeles. In Kentucky, however, he learns of the whole town’s devotion to his loving father, not just his relatives. Later, he even learns about the depth of his mother’s love for her husband. A night long phone conversation with Claire brings the two of them together during Drew’s visit to Elizabethtown. As Drew comes to know all of these people, especially Claire, he begins to move from death to life.

The dramatic and often comical personal journey that Drew takes in this movie is both funny and poignant. The movie goes on a bit too long, however – more than two hours. Also, writer and director Cameron Crowe (ALMOST FAMOUS and JERRY MAGUIRE) throws in one too many cutesy affectations in his story and characters. This may dilute the movie’s emotional power for most viewers.

There are some mixed elements in this movie. For example, there is no sense of the sinfulness of man. Everyone is usually very nice to one another; the ones who have problems are just a little mixed up, Crowe and his actors seem to be saying. Also, the movie implies that Drew and Claire eventually sleep together, though there are no scenes of lovemaking in Drew’s hotel room. Finally, at the hotel, a young bride and groom have arranged several wild days of hedonistic partying for their wedding party. In one scene, Drew steals some beer from the party and has a comical interaction with the groom, who’s drunk.

Ultimately, however, ELIZABETHTOWN has a light Christian worldview. Drew’s journey is not only about moving from failure and death to happiness and life. It is also about gaining insight into different varieties of fulfilling love, including marital love, romantic love and love of others. This Christian worldview is also indicated by a closing positive reference to Jesus Christ in a prayer as Drew’s family back in Oregon sits down to a meal. There is also a reference to Jesus during the Kentucky funeral service for Drew’s father.

If ELIZABETHTOWN had included more such references, eliminated its two “f” words and deleted the implied night of fornication between Drew and Claire, its Christian worldview would, of course, have been much stronger.

It should be noted, however, that Drew honors his father in a sequence where he also honors the kind of out-of-the-way and historical places in America that both his father and Claire apparently love. This and other elements in ELIZABETHTOWN give the movie a gentle, pro-American touch that celebrates Americana. It was also nice to see at least one major Hollywood movie where folksy people with Southern accents were treated decently, without them having to be liberals or political activists.