"The Most Dangerous Place on Earth" 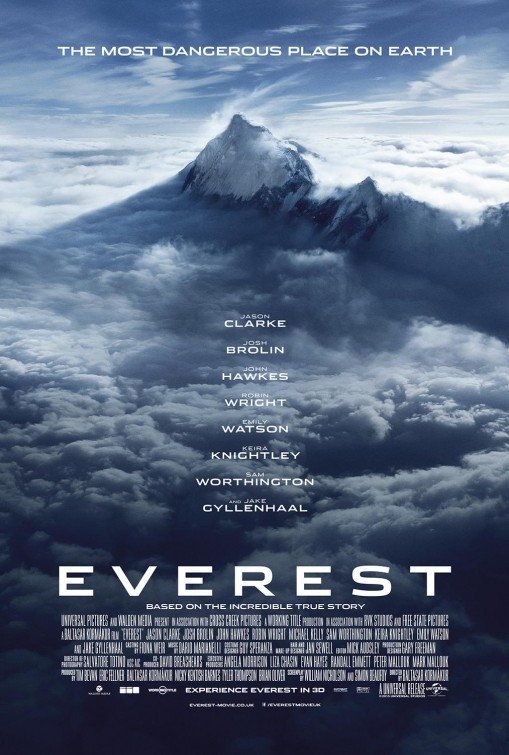 EVEREST is a stunning, thrilling, tragic true story of one fateful climb up the tallest peak in the world, Mt. Everest. Rob Hall is an climber from New Zealand. He runs a company called Adventure Consultants that specializes in taking amateur climbers up to the top of Everest for a hefty price, and, hopefully, back down alive. It’s 1996, and Rob has a full client list. However, half way into the climb, a vicious storm hits the group, resulting in tragedy. EVEREST is a stunning piece of cinematic work, especially in IMAX 3D, which captures the grand magnitude of Everest in the most realistic way possible without actually being there. For anyone familiar with the actual events that took place, they know it was the deadliest day on Mount Everest up until 2014. So, needless to say, EVEREST isn’t a totally happy movie. However, there are still strong, inspiring moral points in EVEREST. People risk their lives, love their families and try to inspire others. There’s very little objectionable content in EVEREST, but there’s a lot of intense peril. So, caution is advised.

(BB, C, Pa, FR, L, VV, AA) Strong moral worldview with some redemptive content focusing on strong moral characters that exude generosity, selflessness, sacrifice, teamwork, and the conclusion implies that love of family may be more important than following a dangerous dream, man points up and says “somebody up there loves us,” plus some false pagan content such as a brief scene in a Hindu temple, a Hindu ritual, and a Japanese woman says a prayer, though it’s unclear to whom; two possible light profanities, though not clear, no other foul language; very intense peril, two men fall to their deaths, people freeze to death and get hypothermia, man gets terrible frost bite and eventually loses his nose and hands, man coughs up blood; no sexual content; no nudity; some moderate drinking with possible drunkenness; no drug use; no other immoral content.

EVEREST is a stunning, thrilling, tragic true story of one fateful climb up the tallest peak in the world, Mt. Everest. Rob Hall (Jason Clarke) is an avid climber from New Zealand and runs a company called Adventure Consultants, an expedition service specializing in taking amateur climbers up to the top of Everest for a hefty price, and hopefully, back down alive. It’s 1996, Rob has a full client list, and Rob’s hoping this year that he can actually get his clients to the top safely, unlike the previous year where they had to turn back. Some of his clients include Beck (Josh Brolin), a Texas doctor, Journalist Jon Krakauer who wants to write a piece on Hall and Doug, a mailman who tried reaching the top of Everest before but failed. Things are different for Rob this time around because his wife, Jan (Kiera Knightley), is expecting, and he’d like to be there for the his child’s birth. The team assembles in Nepal, where Rob explains the difficulty of the climb and the danger they’ll be in the entire time. To reach the peak, there are four camps where they can rest and regroup before continuing. At camp four, they’ll have a small window of time to climb to the peak in between bad weather. At the altitude of 29,029 feet, their bodies will start to self-destruct and die, so they have to be quick. Along the way up the mountain, Hall’s team decides to team up with another expedition group led by Scott Fischer (Jake Gyllenhaal). Scott is much more of a risk taker and has a different leading style, but they decide it’s better for everyone if they team up anyway. The hike up is brutal, and not everyone is able to complete the climb. When a storm rushes into the mountain, the descent back down the mountain causes chaos and the situation becomes deadly, especially for Hall who’s stuck near the peak with no oxygen tanks. EVEREST is a stunning piece of cinematic work, especially in IMAX 3D, which captures the grand magnitude of Everest in the most realistic way possible without actually being there. The experience is both awe inspiring and terrifying. Icelandic Director Balthasar Kormákur does a fabulous job at keeping the epic grounded with the characters, and the all-star cast is exceptional. The third act does become cluttered and slightly confusing due to the chaos of the storm drowning out some of the dialogue, which also isn’t helped by some of the characters’ thick New Zealand accents. However, it’s never forgotten who’s in jeopardy, and what must be done for them to survive. For anyone familiar with the actual events that took place, they know the story is a tragic one. It was the deadliest day on Mount Everest up until 2014. So, needless to say, EVEREST isn’t a happy movie, and the writing doesn’t force individuals into caricatures or clichés. The filmmakers are so intent on avoiding a fabricated conclusion that it nearly becomes tragic in an unhelpful way. EVEREST definitely has strong moral points. Rob Hall is a generous man who cares more about the safety of his clients than his pride and risks his life for others, even though he deeply loves his wife. When asked why they risk their life, marriage and money to climb, Doug answers that if he, a regular mailman, can do something incredible, maybe he can inspire children to do the same. These points are especially touching, and in the end, the movie puts an emphasis on the importance of family over climbing. Happily, there’s hardly no offensive content in EVEREST. There is some incredibly intense peril, with some deaths, and some drinking, so a caution is advised, especially for older pre-teens.