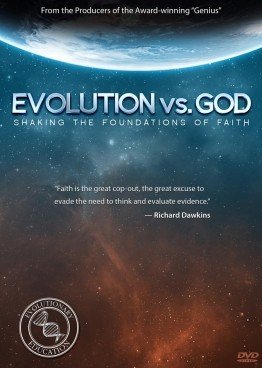 EVOLUTION VS. GOD is a documentary that violently shakes the foundations of scientific faith in evolution. Ray Comfort goes to multiple colleges and interviews students and professors who major or are experts in one or more of the natural sciences. He questions people about Darwinian Evolution, asking for “observable evidence” of a change of kinds, or species, over time. No one is able to answer Ray’s questions. Everyone comes to the conclusion, on their own, that they have an enormous amount of blind faith in what scientists have called evolution.

EVOLUTION VS. GOD has great production values. Also, its research is impeccable. A mild caution may be advised for young children simply because of the morality questions asked during the interviews. If a child doesn’t yet know, or isn’t ready to know, what lust or pornography is, parents should be prepared to explain it to them. The information provided is designed for teenagers and above, anyway. That said, EVOLUTION VS. GOD is extremely Christian. It shows that belief in a divine creator is more rational than the secular atheist’s faith in evolution.

(BBB, CCC) Very Christian, Biblical and Christian worldview and elements, facts about atheism, evolution science and atheist leaders are included but not encouraged; no language or obscenities, once a person is asked if they have ever taken the Lord’s name in vain, and they answer by taking the Lord’s name in vain, but it is bleeped out and you can’t hear what they say; no violence; no sexual content, questions about participation in lust, fornication and pornography are included but told immediately that it is wrong; no nudity; no drugs or alcohol; no smoking or drugs; and, no miscellaneous immorality, questions about lying and stealing are included but, again, told immediately that it is wrong.

EVOLUTION VS GOD is a documentary that violently shakes the foundations of evolution. Ray Comfort goes to multiple colleges, including UCLA, and interviews students and professors, that major or are experts in one or more of the sciences. He questions many people about Darwinian Evolution and faith, asking for observable evidence of a change among kinds of life, or species. No one is able to give a credible answer, and everyone comes to the conclusion, on their own, that they have an enormous amount of blind faith on what scientists have presumed is true, based on vague, unobservable “evidence” they say is millions of years old.

He then goes on to other “evidence” provided by evolution supporters in that we have extra organs or bones in our bodies that are leftovers from evolution and our bodies don’t necessarily need them. Our appendix and coccyx are some examples that are given. Comfort shows that more recent studies have found that the appendix is crucial to the fetus and young adults and then becomes a vital part of the immunity system in adults. The same goes for the coccyx.

Survival of the fittest is addressed when the people are given the question, “If your dog and your neighbor were both drowning, and you could only save one, who would you save?” A shocking number of people said their dog. It demonstrates that evolution supporters simply believe that we are all just animals or talking primates related to bananas, and a human does not deserve to live any more than a dog does.

The questioning of the students and professors is wrapped up when Comfort asks them if they have ever lied, stolen, lusted, or used God’s name in vain before. He goes on to say that ignorance of the law is no excuse, and if God is a just God, then they will go to a burning hell. He offers the redeeming hope of salvation, in which more than one person says that they will definitely think about relying on God rather than evolution.

This documentary has great production value. It is very well put together, and all the research is done down to dotting the final “i.” A mild caution may be advised for young children simply because of the morality questions asked during the many interviews. If a child does not yet know, or is not yet ready to know, what lust or pornography is, prepare to explain it if showing the documentary to children. The maturity for understanding the significance of the information provided in this documentary would also be above a young child’s comprehension level.

That said, EVOLUTION VS. GOD has an extremely Christian worldview. The answers it provides for the divine origin of human life are profound.