"Families Should Stick Together" 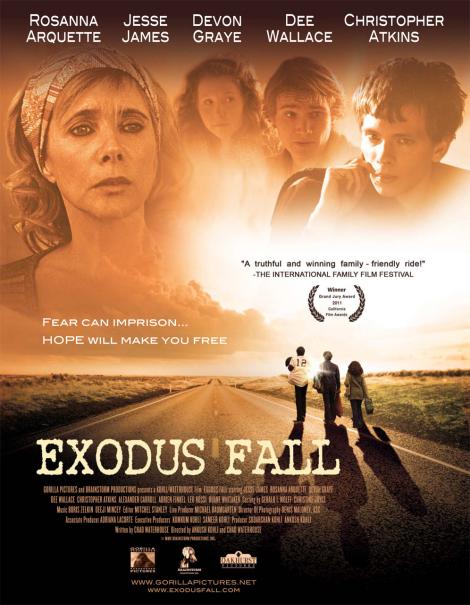 EXODUS FALL is a small independent family drama. The story opens in 1974 with three teenagers, Kenneth, Charlotte and Dana, who’s autistic, fleeing from their abusive, alcoholic widowed mother. The teenagers are trying to reach their kindly grandmother in Oregon to stop their mother from putting Dana in a bad mental hospital. The teenagers get help from a back-packing Vietnam vet named Travis, who’s trying to deliver a letter to the mother of his dead friend, who died in Vietnam. It’s the friend’s deathbed letter to his mother. Of course, the police get a report about the runaway teenagers. Can the teenagers avoid capture before they get help from their grandmother?

EXODUS FALL is a touching movie that’s beautifully shot and acted, with wonderful music. That said, the jeopardy could be stronger, and expository moments slow down the plot. EXODUS FALL has a positive message about the importance of family bonds. Essentially, it says family members should stick together when life gets difficult. The movie ends on a note of repentance and reconciliation that supports that positive message. However, there’s some foul language and other objectionable elements, so caution is advised.

(B, C, LL, V, S, AAA, MM) Light moral worldview with some redemptive elements featuring repentance and the start of reconciliation, marred by some miscellaneous drawbacks; nine obscenities (several “h” and “d” words and two SOB, but no “f” words), two GDs and four light exclamatory profanities; light violence includes wife slaps husband and locks autistic teenager into attic room, drunk driver causes minor car wreck, and a car slides down hill and is found in bushes; implied fornication as woman has men stay over at her house; no nudity; alcohol use, mother becomes an abusive alcoholic, and a drunk driver causes minor car wreck with police car, stunning the policeman driving the car; no smoking or drugs; and, runaway teenagers, teenagers break autistic brother out of mental facility, autistic teenager steals vase but he’s only verbally rebuked, teenage girl wonders if God hates she and her two brothers and prays for God to strike her abusive alcoholic mother dead, and teenagers take drunk driver’s truck after he causes a minor crash and runs away.

EXODUS FALL is a small independent family drama with some good values but with some drawbacks that undermine its overall effectiveness.

The movie opens in 1974 with three teenagers stuck in the desert because their old station wagon has got a flat tire. Kenneth, the older brother, is trying to change the tire while his younger teenage sister, Charlotte, looks after his younger teenage brother, Dana, who suffers from autism. The three teenagers are anxious because they see a young bearded man approaches. The man, a Vietnam vet named Travis who just got out of the war about a year ago, helps Kenneth change the tire. He tells Kenneth and his siblings to do the same as he is doing: help others in need.

The teenagers and Travis go their separate ways, but Kenneth ends up offering Travis a ride. Soon, Kenneth is telling Travis their story. The teenagers are using their dead father’s old car to find refuge with their kindly grandmother in Oregon. Instigating their flight is their alcoholic, abusive mother (who’s never gotten along with the grandmother, the mother-in-law). The mother selfishly put Dana in a bad mental home, but Kenneth and Charlotte have broken him out of the home.

On their way to Oregon, the teenagers agree to give Travis a ride to Utah so he can deliver a letter to the mother of his dead friend, who died in Vietnam. The teenagers are risking discovery by the police. They are comforted, however, by the last words of their father before he died, that he will be watching over them from Heaven.

EXODUS FALL is a touching movie that is beautifully shot and acted. The music is wonderful, especially when you consider this is the two directors, Chad Waterhouse and Ankush Kohli’s, first feature-length movie. That said, the jeopardy in EXODUS FALL could be stronger. There’s also a long flashback in the first act, with narration by Kenneth, that slows down the plot and contains too much exposition. Much of this could have been handled more effectively and more simply by visuals rather than a voiceover.

Although the father has died and the mother is a mess, the movie stresses family bonds. As one of the directors told MOVIEGUIDE®, family members need to stick together when life throws you a curveball. There’s also a touching scene where Travis reads his friend’s last letter to his friend’s mother. Travis also tells the runaway teenagers to show kindness to other people in need. Finally, EXODUS FALL ends on a note of repentance, reconciliation and the beginnings of redemption in the broken relationship between the teenagers’ mother and their grandmother. This ending reinforces the message that family members need to stick together.

These positive themes, however, are marred by some foul language and a scene where Dana, the autistic brother, steals a vase. Kenneth rebukes Dana, but the runaway siblings don’t correct the mistake. Also, the movie makes it clear that, after her husband dies, the alcoholic mother has men stay overnight with her. Finally, at the height of the teenagers’ despair, Charlotte wonders if God hates them, then asks God to strike their abusive mother dead.

All in all, therefore, EXODUS FALL has some rewarding moments for media-wise viewers, but it requires caution for older children because of the foul language and the movie’s other objectionable elements.