"Everyone Deserves a Second Chance" 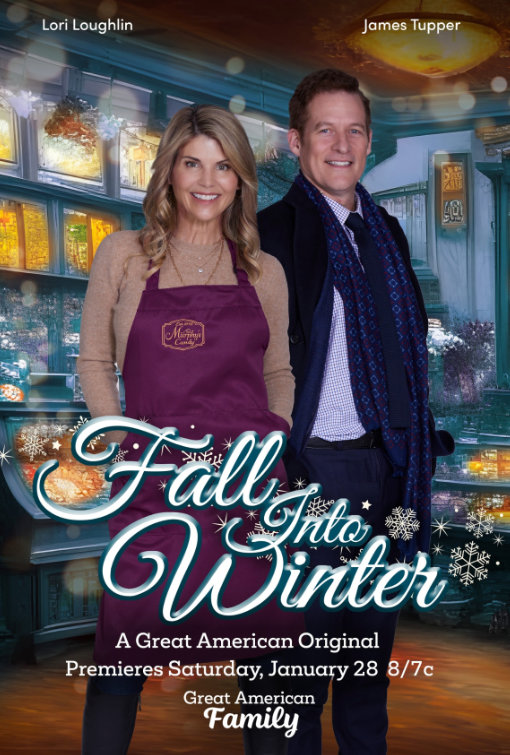 FALL INTO WINTER is a winter romantic comedy on the Great American Family Channel starring Lori Loughlin and James Tupper. Loughlin plays Kari, a small-town candy store owner prepping for the town’s Annual Winterfest, the store’s busiest time of the year. After her brother sells his half of the family business, Kari’s forced to work with Brooks, an old high school classmate who bought her brother’s half. If they didn’t like each other back then, Kari makes it known she isn’t happy to be working with him now. However, as she struggles to keep her business alive, they must learn to work together. Will Kari and Brooks be able to look past their differences and save the store?

FALL INTO WINTER is a wholesome romantic comedy with themes of forgiveness and giving people a second chance. Although the production values falter a few times, the movie tells a heartfelt, cozy, holiday story that’s safe for the whole family. FALL INTO WINTER is also Lori Loughlin’s debut movie with Great American Family, and she delivers a great performance as the lead character.

(BBB, CapCapCap, PP, C, A, M):
Dominant Worldview and Other Worldview Content/Elements:
Very strong moral, pro-capitalist worldview, with a positive view of small-town America and redemptive values, stresses the importance of family tradition, forgiveness and second chances
Foul Language:
No foul language
Violence:
No violence
Alcohol Use:
Several characters drink a glass of wine at two or more points
Smoking and/or Drug Use and Abuse:
No smoking or drug use;
Miscellaneous Immorality:
Some characters hold grudges and act unkindly to one another.

FALL INTO WINTER is a winter romantic comedy on the Great American Family Channel.

Lori Loughlin makes her network debut as Kari, a candy store owner who’s busy prepping for the store’s busiest time of the year, Winterfest. However, her brother and part owner of the store, tells her that he and his wife are moving to London. He says he must sell his half of the company but reassures Kari he has a trusted buyer lined up to buy.

Kari’s sadness turns to frustration when she learns that the new business partner is a man named Brooks, a former high school classmate she didn’t like. Despite her reluctance, she agrees to Brooks becoming her business partner, but they get off to a rocky start.

Kari feels as if Brooks has no regard for her family’s legacy with the store, which was started by her grandparents. Meanwhile, Brooks believes Kari’s unwilling to make any changes to keep the business alive and thriving.

At first, Kari wants Brooks gone. However, after he finally shows genuine care for her and her family’s business, she starts to fall for Brooks. She forgets about her plan to replace him as a business partner and instead helps show him the ins and outs of owning a family business in a small town.

Meanwhile, Brooks is offered a top executive job in California and must decide between the prestigious position and Kari’s shop. In his short time as Kari’s business partner, Brooks has grown fond of the town, the candy store and Kari, but he admits to his father he’s tempted to take the higher-paying job. Another complication arises when there’s a miscommunication between Kari and Brooks about how they feel about one another.

FALL INTO WINTER is a wholesome romantic comedy with themes of forgiveness and giving people a second chance. While the production values falter a few times, the movie tells a heartfelt, cozy, holiday story that’s safe for the whole family. Also, FALL INTO WINTER is Lori Loughlin’s debut movie with Great American Family, and she delivers a great performance as the lead character.