FOR LOVE OF THE GAME 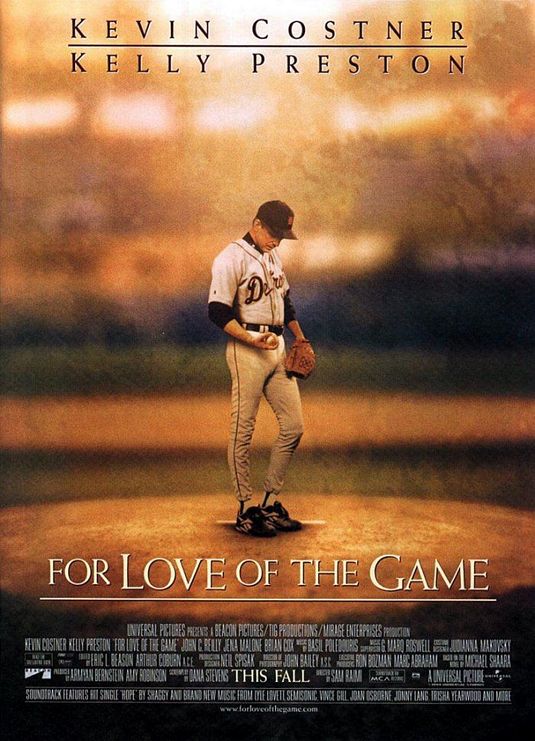 In FOR LOVE OF THE GAME, Kevin Costner plays veteran pitcher Billy Chapel, who re-examines his career and his now rocky romance with a younger divorced woman during a crucial game in Yankee Stadium. Despite some moral elements, a redemptive ending and two positive mentions of God, this movie contains plenty of foul language and other moral flaws, such as an acceptance of premarital sex by the main character, even though he professes a belief in God. There are no explicit sex scenes, however.

Romantic worldview where personal feelings take precedence & marriage is not extolled or even mentioned, but with moral elements of treating others mostly (but not always) with kindness despite one's high position as a celebrity, treating one's profession, vocation or calling with respect & mentioning God twice in a positive light, plus redemptive element where forgiveness & reconciliation occur; 22 obscenities & 25 profanities (including many strong ones), plus one obscene gesture; man cuts hand on electric saw, with blood shown; implied fornication; upper male nudity in naturalistic settings & no other nudity but woman in underwear & implied nudity under bed covers; alcohol use & drunkenness; smoking; and, promiscuity & premarital sex seen as no big deal despite reference to past illegitimate birth & man lets his focus on himself & his career hurt relationship with girlfriend.

Kevin Costner’s FOR LOVE OF THE GAME is a great baseball flick and an engaging love story, but it has some major flaws in its moral content and its worldview. Even so, this movie clicks when the players take the field!

Costner’s crisp performance brings baseball to life in director Sam Raimi’s FOR LOVE OF THE GAME. Costner plays Billy Chapel, a 40-year-old pitcher for the Detroit Tigers. Billy has reached a point in his life when he must examine his past, both professionally and personally, to re-evaluate the direction of his future. The 20-year veteran and future Hall of Famer learns that the Tigers’ owner is selling the team. He also learns that the new owners want to trade him to the Giants. At the same time, Billy learns that his old girlfriend, Jane Aubrey (played by Kelly Preston), does not want to get back together with him but is taking a job in London, England.

As Billy pitches “the game of his life” in Yankee Stadium, his life on the field and off the field flashes before him. He remembers his deceased parents watching him when he played in the World Series, and he remembers being trained in the ways of baseball by his beloved father. Mostly, however, he remembers his life after he met Jane and her troubled but good-hearted teenage daughter, Heather. According to the story, Jane is about 27 and Billy about 35 when they first meet. Billy’s passion and overwhelming focus on his career eventually overpower his relationship with Jane. Jane, meanwhile, is overly cautious and guarded because of her failed marriage. Will she hang in there despite the curve balls Billy throws her?

Kevin Costner perfectly embodies the spirit of his character, Billy Chapel. He is also very credible as a baseball superstar. Kelly Preston portrays the vulnerable, appealing Jane with zeal. John C. Reilly adds depth as Billy’s close friend and catcher, Gus. Director Sam Raimi (who also directed last year’s well-acted A SIMPLE PLAN) has a deft hand with actors, even when he is helming action genre works like ARMY OF DARKNESS, DARKMAN or TV’s Hercules and Xena series, both of which he created and produces. Raimi also is effective in handling the flashbacks, which he never allows to become confusing. The best parts of his movie are when he draws the audience into the thrill and concentration of being a pitcher with an important game on the line. These scenes have lots of atmosphere and are pretty exciting.

One doesn’t have to be a big baseball fan to enjoy FOR LOVE OF THE GAME. The movie deals with other issues, such as what it’s like to be a celebrity in the public eye, including how to juggle your private life with your public life. Despite the superstar status of its main character, FOR LOVE OF THE GAME presents a good role model in Billy Chapel, who generally, though not always, treats other people with kindness and respect. Chapel also treats his profession with respect. The only time he fails in these regards is when he injures his hand and becomes overly concerned about his own professional future, to the point of mistreating the ones he loves. This sets the stage, however, for the movie’s final redemptive scenes of forgiveness & reconciliation.

FOR LOVE OF THE GAME has some major problems with its moral content and worldview, however. First, it has plenty of foul language in it, including many strong, gratuitous profanities which misuse the name of God. Secondly, Billy and Jane never mention marriage during their on-screen relationship, even though the movie implies that they sleep and fornicate together. From a Christian or biblical point of view, this significantly damages their moral credibility as role models. Finally, although Billy Chapel professes a belief in God and even prays to God at one point, both the belief and the prayer lack moral and spiritual substance. The movie never directly indicates that Billy’s belief in God has a major impact on his life, especially when it comes to the crucial issues of premarital sex and marriage. Thus, as a role model of a godly athlete, Costner’s Billy Chapel leaves much to be desired. This is a sad state of affairs, since major league baseball contains many strong Christian athletes who are not ashamed of professing their belief in Jesus Christ.

Writer: Dana Stevens BASED ON THE NOVEL BY: Michael Shaara