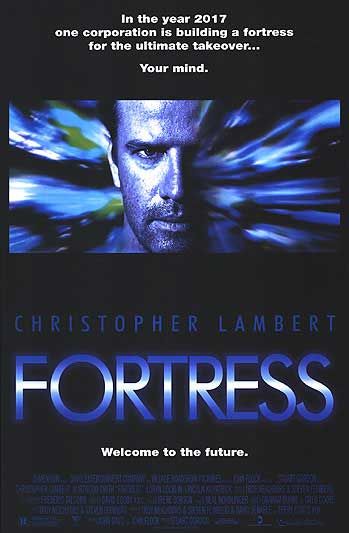 The movie FORTRESS is a futuristic drama about a 33-level underground penal facility and its much-abused prisoners. Graphically violent, the film contains much gratuitous foul language, homosexuality and an explicit sex scene between husband and wife.

The movie FORTRESS opens with an attempt by Captain Brennick to escape from the United States with his wife. Their reason for fleeing and why his wife’s second pregnancy is unauthorized by the government are not made clear until after their capture and incarceration. The Fortress is a 33-level underground penal facility owned and operated by men-tel, a private corporation in a futuristic society, a la “Big Brother.” The thin plot thickens with a series of cliches.

The cartoonish plot of “Let’s remove the intestinators (which are gadgets embedded in the prisoners’ stomachs) and escape, and let’s save the unauthorized unborn baby and its mother,” cannot be saved by peppering the film with trite dashes of suspense and gore. The overall special effects are a junk-yard version of TERMINATOR II, ALIEN, ROBOCOP, and DEATH BECOMES HER. Originality is a distant memory. By the time the film ends, the only FORTRESS is the movie house in which it plays and from which one is glad to escape.