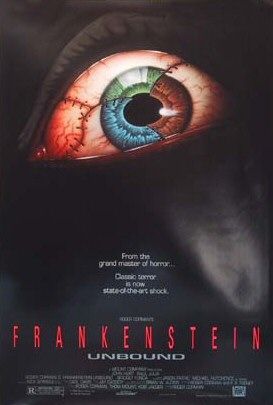 Graphic murder and violence (including a hanging and a decapitation); brief female nudity and implied promiscuity, two obscenities and one profanity

If it were not for some graphic murders and violence, brief female nudity and a few instances of objectionable language, this time-travel variation on the Frankenstein legend would be an interesting and astonishingly moralistic parable for the unbeliever. As it is, the objectionable elements discredit its insightful message.

Set in New Los Angeles in the year 2031, scientist Dr. Buchanan has been experimenting on a new weapon which he hopes will bring peace to mankind. An unintended side effect, however, creates a stratospheric disturbance, which opens up a “time slip” that transports Buchanan and his talking, space-age car to the Swiss countryside near Geneva in the year 1817.

Of all people, Buchanan meets another scientist, Dr. Victor Frankenstein, and the doctor’s creation, the ghastly beast himself, who demands that Dr. Frankenstein create a mate for him or he’ll kill Victor’s fiance, Elizabeth. Buchanan urges Frankenstein to refuse and to intervene on behalf of a girl doomed to hang for a murder that the monster has committed.

While Victor is mulling over his options, Buchanan happens to meet Lord Byron, Percy Shelley and Mary Wollstonecraft. Buchanan shows the famous Frankenstein book (his space-age car prints it out) to Mary and tells her that she will finish writing it someday. However, the author of Frankenstein is interested in other things. “Percy and Byron preach free love,” she says, leading him to bed. “I practice it.”

The monster murders Elizabeth, but Victor decides to re-create her by coercing Buchanan into helping him. Buchanan’s car from the future is to be used as an intermediary power source, and the monster, awed by Buchanan’s vehicular creation, asks Buchanan who made him. “God made me,” he replies. “Who is God?” the creature asks. “Ask Victor,” he says.

This scene and others like it are particularly interesting in that they contain frank and open talk of science as a religion that leads to madness. Frankenstein, who wants to free man from a fictitious God, believes that religion is a crutch for weaker men, but, Buchanan opposes him saying, “No one can create a soul.”

Such talk gives form to Buchanan’s beliefs, who is coming to realize that he wanted to help the world, but, like Frankenstein, created a monster. That self-discovery finds its fulfillment in the next moment when, as Elizabeth is re-animated, the sky parts and the time slip that Buchanan has created converges upon them. “Now,” he grimaces, “meet my monster.”

The foursome are transported to a bleak, frozen world somewhere in the distant future. Buchanan and the monster eventually are the only two left who battle to the end. “What am I that you must destroy me?” the monster queries. Buchanan seems to have learned his lesson: “An abomination in the eyes of God,” he answers.

FRANKENSTEIN UNBOUND is a parable for the unbeliever, showing that God alone possesses the wisdom to create and sustain life. The Christian, however, doesn’t need to see the film to understand this basic point of theology, and he would very likely find offensive the graphic violence with which the murders are committed, the implied promiscuity that occurs between Buchanan and Mary, and the three instances of obscenity and profanity. Furthermore, the movie ends on a false apocalyptic note, saying that once the spirit of Frankenstein has been unbound by man, it will be with him forever, a rather silly if not downright absurd notion.