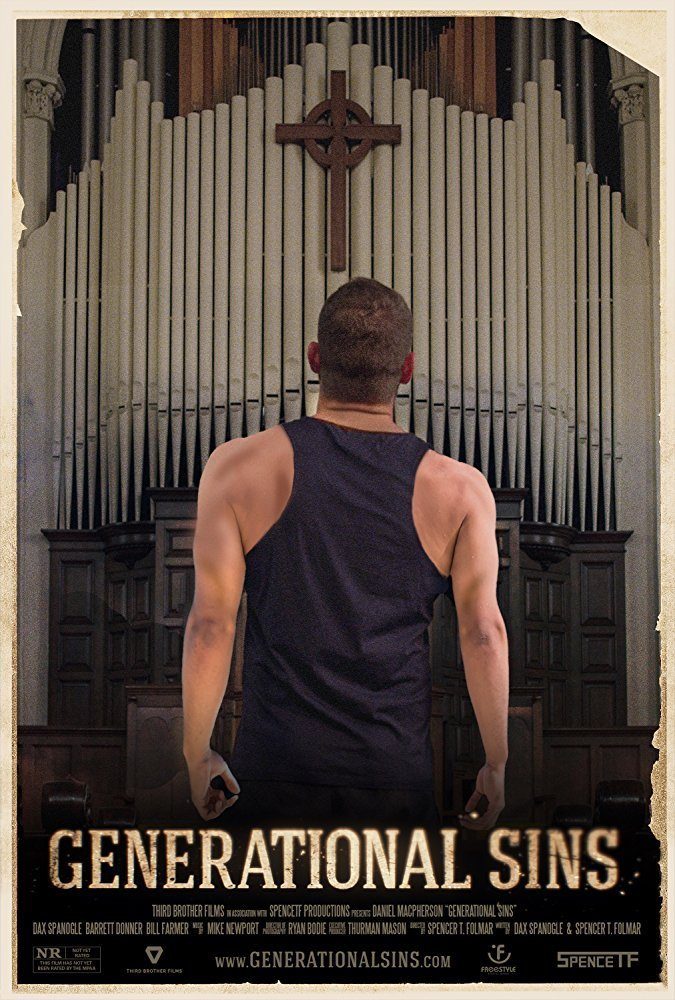 GENERATIONAL SINS is a faith-based drama about two distant brothers with tragic childhoods who must come together because of their deceased mother’s final wishes. The mother wanted the eldest brother, Drew, to take the younger brother, Will, to their rural Pennsylvania birth home. The two brothers don’t get along, but Drew agrees to fulfill his mom’s dying wish. On the road trip, Drew must confront his painful past and possibly find reconciliation with his brother, but more importantly with his Heavenly Father.

Daniel MacPherson gives a solid performance in GENERATIONAL SINS as Drew, though many of his actions are sporadic and need more nuance. That said, the musical score complements the story nicely, and the resolution is poignantly redemptive. GENERATIONAL SINS has faith at the heart of its story, which is neither overly blunt, nor intentionally vague. Sadly, the filmmakers purposefully try to make the movie more “gritty” by inserting foul language. This diminishes the movie’s broad audience appeal, which is regrettable because the story’s a really positive one. Because of the movie’s edgy content, strong caution is advised for GENERATIONAL SINS.

(CCC, BB, Ho, LLL, VV, S, N, AAA, D, M) Very strong Christian and strong biblical worldview with forgiveness, redemption, transformation, and repentance, all with faith being at the heart of the story, plus a guy wonders if a girl is a lesbian because she refused his advances and a redneck character asks a man if he’s calling him a “faggot”; at least 31 obscenities (including two “f” words and frequent “s” words), and an obscene gesture; moderate and light violence includes implied child abuse, a bar fight results in some battered men, one man has a gash on his head from the bar fight, man almost kills himself, and a dead man is found, likely from a heart attack; a girl is seen walking to the bathroom in a guy’s house and this implies the two slept together, a vague reference to self-abuse and a couple homosexual references; upper male nudity and girls in provocative clothing dance at a party; heavy drinking, alcoholism, and drunkenness; heavy smoking of cigarettes; and, two brothers don’t get along, resentment and bitterness, but there’s a positive resolution.

GENERATIONAL SINS is a faith-based drama about two distant brothers that must come together because of their deceased mother’s final wishes. The movie is well acted and has its moving moments, but is not without flaws along the way.

Drew Caldwell grew up bitter and angry, due to an alcoholic, abusive father in a small country town in Pennsylvania. At a certain point, Drew’s mother left her husband and took Drew’s younger brother, Will, with her. Eventually, she remarried a man named Stan in Florida.

When Drew Caldwell goes to his mother’s home in Florida to see her before she passes, she asks Drew to take his brother Will to their birthplace so Will can see where he came from before moving to Florida. Her true motives are to bring the two distant brothers together again. She hands Drew her cross necklace, then dies soon thereafter.

The two brothers set out on a road trip to Pennsylvania, with hopes of returning within five days for their mother’s funeral. Will, who’s spoiled and entitled due to working for his stepfather Stan’s successful company, doesn’t respect his brother Drew, who seems to barely survive and is a bit of a loner. Stated plainly, the brothers don’t get along and have a lot of bitterness and resentment. Drew is especially angry at God.

Once in Pennsylvania, Drew runs into his high school sweetheart, which reignites some old feelings. He also sees the local pastor, who tells Drew that his abusive father is actually a changed man and is still living in their childhood home. The fact that his father is still there and is even liked by some of the locals, infuriates Drew.

Will Drew do something drastic? Can he reconcile his differences with his brother, and his anger toward both his biological father and his Heavenly Father?

GENERATIONAL SINS is essentially a road trip version of WARRIOR, without the sports setting. Daniel MacPherson gives a solid performance as Drew, though many of his actions are a bit sporadic and could have used more subdued nuance. There are other sophomoric issues, including some poor ADR (re-recorded dialogue), scenes that drag way too long and some static dialogue. That said, the musical score complements the story nicely, and the story’s resolution is redemptive, poignant and touching.

GENERATIONAL SINS has faith at the heart of the story, and it’s neither overly blunt, nor intentionally vague. Its promotion of forgiveness, repentance and doing better than the previous generation coming before us is commendable. That said, the filmmakers purposefully try to make the movie “gritty” by including a slew of foul language. This diminishes the movie’s broad audience appeal, which is regrettable, because the story is ultimately a really positive one. Because of the foul language, violence and other objectionable content, MOVIEGUIDE® advises strong caution for GENERATIONAL SINS.