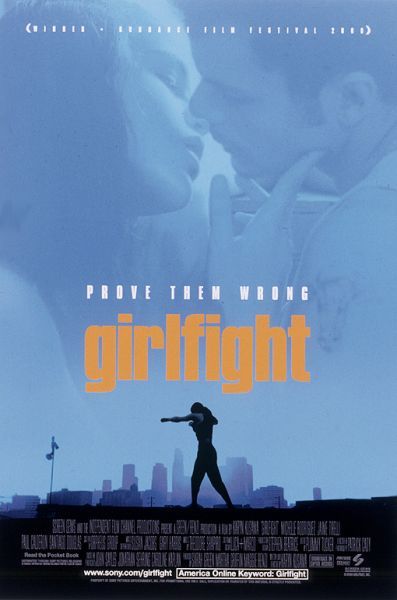 GIRLFIGHT stars newcomer Michelle Rodriguez as Diana, a troubled, poverty stricken 18-year-old high school senior who’s being disciplined for getting into fights at school. Diana doesn’t know how to control the rage seething inside her. More importantly, she doesn’t care. Living in the Brooklyn projects with her dismissive father, Diana one day encounters the secret world of boxing. A trainer named Hector teaches her the values of patience and hard work, which help her control her anger and focus her personal strength. Complications follow, however, when her father intervenes and her friendship with a fellow boxer blossoms into a tentative romance.

A well-made movie by a first-time director, Karyn Kusama, GIRLFIGHT contains too much strong foul language. Michelle Rodriquez as Diana and Jaime Tirelli as boxing trainer Hector, deliver outstanding performances. A mild feminist worldview mars the movie, even hurting its credibility at one point. The movie also leaves hanging Diana’s terrible relationship with her father, giving viewers a bad family model to go along with its strong foul language. On a more positive note, GIRLFIGHT advocates treating other people with love and respect. It also values working hard, using intelligence and being patient

(Fe, Pa, PC, B, C, S, N, AA, D, MM) Feminist pagan worldview with politically correct implications & some moral elements about treating other people with love & respect & working hard, patiently & intelligently to achieve success, plus a few visual references to Jesus Christ & the Virgin Mary; 57 obscenities & 5 strong profanities; moderate boxing violence & female boxer with a seething rage inside her gets into bad fight with her father who treats her badly; 18-year-old girl & 19-year-old boy make out in his bed clothed, but no fornication, although they do sleep together in his bed at his parents’ place where the girl runs to after a big fight with her father; occasional upper male nudity in boxing ring & boxing gym & 19-year-old boy wears loose fitting robe over underwear in scene with 18-year-old girl; alcohol use & drunken father; smoking; and, stealing money & hiding things from parent & father has really bad relationship with his daughter which the movie never resolves or contrasts with good family values.

GIRLFIGHT is one of the better independent American movies coming out this year. Although it has some moral and worldview problems, it distinguishes itself with some finely drawn characters and excellent performances in a rough urban setting.

The movie stars newcomer Michelle Rodriguez as Diana, a troubled, poverty stricken 18-year-old high school senior who is being disciplined for getting into fights at school. Diana doesn’t know how to control the rage seething inside her. More importantly, she doesn’t care. Living in the Brooklyn projects in New York City with her dismissive father, Sandro, and her younger brother, Tiny, Diana has witnessed generations of families who can’t seem to move beyond the confines of their poor neighborhoods. Therefore, she apparently feels she has nothing to lose by behaving improperly.

One day, Diana’s father sends her to give money to the boxing coach, Hector, who’s training her brother, who would much rather be working on his artistic skills. At the gym, Diana discovers the world of boxing. She secretly begins training with Hector, but she steals money from her father to do it. Diana relishes the work, slowly learning to control her temper and channel her strength. She even impresses Hector, an immigrant from Panama who has seen many boxers come and go.

Eventually, Diana starts competing with other featherweights, both male and female. Complications follow, however, when her friendship with a fellow male boxer, also a featherweight, blossoms into a tentative romance.

The two most outstanding performances in this well-made movie are Michelle Rodriguez as Diana and Jaime Tirelli as Hector, Diana’s boxing trainer. There is nothing phony or faked about their performances. The scenes between them are very well written. These qualities are probably due to the fact that the writer/director, Karyn Kusama, has done some boxing herself, starting in her early 20s. Furthermore, since most of the scenes between Diana and Hector contain less of the foul language that comes through in the movie’s other scenes, it was even more fun to watch them together as Hector tries to teach Diana “the ropes” so to speak.

Besides its performances, GIRLFIGHT works well on several other levels. This includes its high production quality on a low budget. Most importantly, however, are the complex messages that the movie sends to viewers.

The most obvious of these messages, and perhaps the least interesting, is the movie’s pagan feminist worldview. Although the movie shows a few images of Jesus Christ and the Virgin Mary in the boxing gym, there is really no Christian or biblical worldview supporting the values that the movie expresses. The movie also accepts the idea that women not only should be able to compete in a boxing ring but they also should be able to compete against men in the boxing ring. The biggest feminist conceit of this movie’s pagan worldview is the idea that a woman boxer may be able to punch as hard as the best male fighter in the same weight class. Although it is possible, of course, and perhaps desired, for women to build strong muscles through athletic training, it is highly improbable, if not impossible, that a woman will ever be able to build as strong a muscle as an equally well-trained man with a similar weight. Thus, GIRLFIGHT loses a bit of credibility when it suggests in a couple of scenes that Diana is able to punch just as hard as the best male fighter in her weight class. If GIRLFIGHT’s filmmakers, led by Kusama, would have been more willing to question the false feminist assumptions in their story, they might have avoided this problem and made a stronger movie. Don’t expect other critics to notice this problem, however.

GIRLFIGHT’s feminism is not shoved down the viewer’s throat, however. Thus, in its other values and messages, GIRLFIGHT advocates the moral value that people should treat other people with love and respect, no matter the external circumstances they face. In fact, the movie shows that, even when circumstances bring people into honest conflict, they can avoid the acrimony that such conflict often can bring by using love and respect. The movie also shows that, by working hard, being patient and becoming disciplined, troubled people can overcome some problems and achieve a modicum of success. Thus, Diana works hard while Hector teaches her patience and discipline, and the consequent physical transformation in Diana results in both personal growth and outward success. The movie also expresses the positive message that “boxing is brain over brawn.” This idea is another thing that helps Diana work through her problems and achieve success. It also puts the right moral perspective on the role of mind and body not only in sports but in all endeavors.

Despite its positive qualities, GIRLFIGHT contains lots of strong foul language. Furthermore, it not only suffers from a little credibility problem, it also fails to fully explore the conflict between Diana and her father. This conflict plays an important role in the movie. In fact, it explodes in an important scene where Diana and her father actually come to physical blows. The failure here is that the movie never follows up this scene with some kind of resolution to the conflict. Even a scene where Diana and her father just agree to disagree might have been welcome because it would at least have not left this important subplot just hanging. Writing such a scene can be very difficult, especially if you want to avoid easy solutions and cliches, but such a scene might well have turned GIRLFIGHT into a four star movie.

This problem also dilutes the movie’s moral acceptability, because it leaves viewers with a really bad example of parent-child relationships. Of course, the Bible gives plenty of instruction on how people should treat such relationships. It even provides solutions on how families and communities should properly deal with a situation where a parent or a child mistreats the other. In every case, we should follow God’s moral laws, as revealed in the Bible, not man’s laws. Although sinful people will object, that doesn’t mean we shouldn’t use common sense and sensitivity when we turn to God’s Holy Word. After all, the Bible condemns sin, but it also provides a means for achieving eternal forgiveness and salvation in the eyes of God.