"Close But No Cigar" 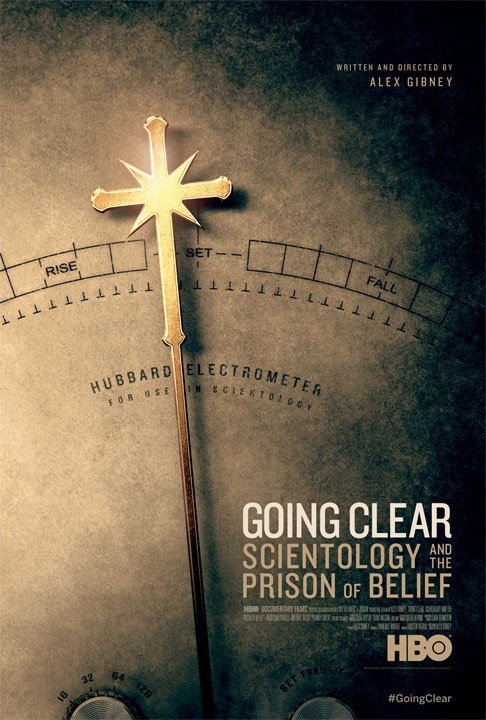 GOING CLEAR: SCIENTOLOGY AND THE PRISON OF BELIEF is a devastating documentary depicting the evils of the worldwide cult. GOING CLEAR opens with a veteran actor, Oscar-winning writer-director Paul Haggis and some among lesser-known people describing how they were drawn into Scientology and how they slowly came to realize it was packed with lies and abuses. It shifts into a history of the cult’s strange, mixed-up founder, L. Ron Hubbard. The documentary then digs into its most disturbing and compelling subject matter. In this section, it details incredible abuses of slave labor, dismal living conditions, brainwashing, and blackmail that keep members within the fold.

Overall, GOING CLEAR is a powerful, daring critique of Scientology. The movie’s biggest failing is that it gives a moral, sociological and humanist definition of the word cult instead of a theological, philosophical one. Thus, it fails to deal with the root problems of Scientology, which are its heretical theology and its rejection of God, Jesus and the Bible. Besides its humanist, homosexual perspective, GOING CLEAR also has some strong foul language and disturbing accounts of mental, emotional and physical abuse. So, extreme caution is advised.

(B, H, PCPC, HoHo, O, LL, VV, MMM) Light moral worldview about the New Age cult of Scientology but placed in a humanist context that also presents a politically correct, pro-homosexual view of Proposition 8, which the Church of Scientology supported, plus some references to the occult background of Scientology and its founder; about 15 or 16 obscenities and profanities (including a bunch of “f” words, mostly from one interviewee); no depicted scenes of violence but discussion of some disturbing allegation of physical, emotional and mental abuse; some footage of Tom Cruise and Nicole Kidman passionately kissing in their pornographic movie EYES WIDE SHUT; upper male nudity in scene from movie, where it’s also implied Nicole Kidman is nude; no alcohol; no smoking or drugs; and, cult uses deceit, intimidation, shunning, lawyers, and abuse to keep recalcitrant cult members in line and remove malcontents.

GOING CLEAR: SCIENTOLOGY AND THE PRISON OF BELIEF is a devastating documentary depicting the evils of the modern-era worldwide cult, the Church of Scientology and how it uses deceit, manipulation, intimidation, shunning, lawyers, and physical, mental and emotional abuse to maintain power over its members. GOING CLEAR has a light moral agenda that exposes some of the evils of Scientology, but it places everything in a humanist viewpoint that avoids the root problems of a cult like Scientology and that promotes a pro-homosexual agenda because Scientology opposes it.

Based on the 2013 book of the same name by journalist Lawrence Wright, the documentary is written and directed by Alex Gibney, who won an Oscar for the documentary TAXI TO THE DARK SIDE, about alleged abuses at secret CIA prisons for terrorists. Gibney has also taken on the Catholic Church and its coverups of child abuse perpetrated by priests in a prior HBO documentary, MEA MAXIMA CULPA.

GOING CLEAR opens with veteran actor Jason Beghe (of NBC’s hit show CHICAGO FIRE) and Oscar-winning writer-director Paul Haggis (CRASH), among lesser-knowns, describing how they were drawn into the cult, and how they slowly came to realize it was packed with lies and abuses. It then shifts into a history of the cult’s founder, L. Ron Hubbard, a mediocre science-fiction writer who rushed through writing over 1000 pulp-fiction books before creating the cult as part of a diabolical bet with others over who could create and establish an invented religion with the greatest number of followers. Hubbard won, of course.

Throughout, the movie makes clear that Hubbard himself was a mess of a man, with broken marriages and a number of bad personality traits. Yet, his personal magnetism attracted many followers as he aggressively promoted his main cult guidebook, “Dianetics,” as an alternative to psychology.

After this initial period of detailing his history, the documentary digs into its most disturbing and compelling subject matter. In this section, it details incredible abuses of slave labor, dismal living conditions, brainwashing, and blackmail that keep members within the fold even as their darkest secrets are revealed and used against them. Meanwhile, their bank accounts are bled dry. The cult forces members to break off ties with friends and family who won’t believe the Scientology precepts, or especially those who choose to leave the church at great risk.

The most disturbing elements come in descriptions of how the cult discourages members from having children and practices terrible neglect of the such children, whom they take away from their parents and raise in dismal conditions. One woman describes and re-enacts how she had to run for her life with her child to get away after finding it had become diseased through the lack of care from the cult.

Worst of all are admissions by former officials of the cult who have finally broken away from the “church” and now admit that it’s a giant scam that unleashes terrible physical, psychological and emotional pain on those who dare speak up or act against it. The most shocking material concerns current “church” leader David Miscavige, who mysteriously took over after Hubbard died in the mid-1980s. Miscavige has established a bizarre friendship with superstar actor Tom Cruise where Cruise reportedly has been treated almost like a god by the “church” and its members.

In fact, the movie strongly implies that Cruise in particular is so aware of what is happening in the abusive higher levels of the cult that he should be held accountable to either reform it or quit. The cult’s other most famous member, John Travolta, is shown as more naïve of the practices and a more brainwashed minion than Cruise. The movie also details the history of the cult’s battles with the IRS for tax-exempt status as a religion, and what happened when they finally achieved that status.

Overall, GOING CLEAR is a powerful and daring piece of documentary filmmaking that is likely to fascinate all who watch it and in particular, those interested in the inner workings of Hollywood at its worst. The movie’s biggest failing is that it gives a moral, sociological and humanist definition of the word cult instead of a theological, philosophical one. Thus, it fails to deal with the root problems of Scientology, which are its heretical theological assumptions and its rejection of the God of the Bible, who sent his only begotten son, Jesus Christ, to die for our sins so that whoever believes in Him shall have eternal life. Also, since the Church of Scientology supported California Proposition 8, which defended traditional marriage, this documentary presents a pro-homosexual attack on the church’s position on this important major. Even a broken clock is right twice a day, and Scientology’s support for traditional marriage is one thing it gets right, even though it conveniently seems to look away regarding Tom Cruise’s multiple marriages.

Besides its humanist, homosexual perspective, GOING CLEAR also has some strong foul language and some disturbing discussions of mental, emotional and physical abuse. So, extreme caution is advised. GOING CLEAR would have been much better if it had approached its subject from a Christian, biblical perspective, without the spurious attack on Scientology’s position regarding same-sex marriage.