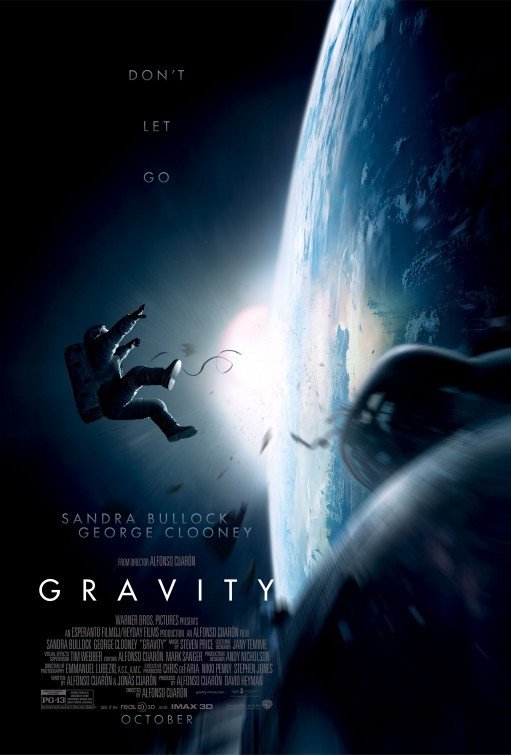 GRAVITY is an amazing piece of brilliant filmmaking, with another outstanding performance by Sandra Bullock of THE BLIND SIDE. In the story, two astronauts are adding some equipment to the Hubble Telescope. They get stranded when a sudden debris field destroys their shuttle and the telescope. The male astronaut commanding the mission tethers himself to the female astronaut. He starts using his jetpack to get them to the international space station, 100 kilometers away, but his jetpack is running out of fuel, and the woman astronaut’s spacesuit is low on oxygen.

The special effects and 3D in GRAVITY are thoroughly groundbreaking and absolutely incredible. Special effects, however, are meaningless without a great story: and, GRAVITY has a real doozy. Almost everything that can go wrong, does. Also, Sandra Bullock is terrific as the rookie astronaut haunted by her young daughter’s tragic, accidental death. Even better, GRAVITY has a strong moral worldview stressing courage under fire, sacrifice, and redemption through adversity. That said, there’s some foul language and intense, scary scenes of deadly peril. So, MOVIEGUIDE® advises caution, especially for younger children.

(BBB, CC, FR, LL, VV, A, M) Very strong moral worldview about courage under fire, perseverance, never giving up, including woman asks for prayer and seems to thank God at two crucial points, plus a solid Christian, redemptive theme of sacrifice, a symbolic baptism occurs, the lyrics to a country song played repeatedly open with an appeal to the LORD, and an icon of Jesus Christ is shown connected with a group of absent Russian astronauts, but there is a shot of a Buddha statue in connection with a group of absent Chinese astronauts; 17 obscenities (including one “f” word), one strong profanities, and four light exclamatory profanities; strong intense, suspenseful action scenes as speedy debris field hits three astronauts working on the Hubble telescope in space, one astronaut is sent spinning round and round, astronauts in spacesuits slam into satellite and space station, astronauts desperately grab for places to hold onto to get back into space capsules, astronauts in danger of drifting forever into space, man-made structures in space torn apart by drifting but speedy debris field, brief images of frozen corpses inside space station, an image of an astronaut in spacesuit’s head where half his face is missing after his helmet was hit by speeding debris and images of stars on the rear of his helmet, space station explodes, fire in one space outpost, and woman astronaut in danger of hallucinating for lack of oxygen; no sex; no nudity but woman takes off her spacesuit twice and she’s wearing a gray T-shirt and dark blue underwear that looks military grade; alcohol use; no smoking or drugs; and, woman astronaut decides to give up at one point but changes her mind, woman talks about losing her daughter to an accident, and astronaut starts to tell risqué story about searching for his girlfriend in New Orleans, but he’s interrupted.

GRAVITY is an amazing piece of brilliant, exhilarating filmmaking, with another outstanding, Oscar worthy performance by Sandra Bullock (THE BLIND SIDE). It truly is an exceptional movie that will leave many moviegoers with only one thought – “Wow!” GRAVITY does have some foul language and many intense, edge-of-your-seat moments, however.

The movie opens with three astronauts outside a shuttle doing some work on the Hubble Telescope. Attached to a robotic arm, Mission Specialist Dr. Ryan Stone (Bullock) is installing a new scanning system she devised. Meanwhile, the veteran commander on the mission, Matt Kowalski, is enjoying testing out a new jetpack that lets him roam around at will, with no tether. Kowalski is also enjoying telling some of his tall tales to everyone, including Mission Control back in Houston.

Mission Control issues an innocuous report to the astronauts about a Russian spy satellite hitting a telecommunications satellite and sending out a debris field. Mission Control calmly assures the astronauts that the debris field isn’t expected to hit them. Suddenly, however, everything changes. The debris field hits the shuttle and the Hubble telescope, killing the third astronaut. It knocks out all communication and leaves Ryan and Kowalski drifting alone in space. Kowalski manages to tether himself to Ryan and starts using his jetpack to get them to the international space station, which is 100 kilometers away. But, Kowalski’s jetpack is running out of fuel, and Ryan’s spacesuit is running out of oxygen.

Thus begins a harrowing fight for survival that will test the mettle of both the veteran astronaut and the rookie.

The special effects in GRAVITY, including its use of 3D, are thoroughly groundbreaking and astonishing. They put the viewer inside outer space with the astronauts during their ordeal. At first, the setting is hypnotically beautiful, what with the astronauts floating gracefully above Mother Earth. Then, it becomes absolutely terrifying as the dangers of such a setting suddenly come to life.

Special effects are meaningless without a great story, however. GRAVITY has a real doozy. Almost everything that could go wrong, does, in the GRAVITY plot. Eventually (POSSIBLE SPOILERS), Sandra Bullock’s character makes it back to the international space station, but a fire has started to break out. Soon, half of the station is engulfed in flames, and Mission Specialist Stone has to hustle to the escape pod to flee. The problem is, the escape pod’s parachute has accidentally deployed, and the pod can’t break free.

Holding everything together here is Sandra Bullock’s tour de force performance as the rookie astronaut haunted by the tragic accidental death of her young daughter. In GRAVITY, as she did with her Oscar-winning performance in THE BLIND SIDE, Sandra Bullock shows once again that she’s a consummate professional. In much of this movie, she’s on the screen all alone. Whether alone, or playing off a gregarious George Clooney as Commander Kowalski, she has a commanding presence onscreen.

GRAVITY has a strong moral worldview. The story is one of courage under fire and redemption through adversity. At one point, the heroine asks for prayer. At another point, she seems to thank God. Toward the end, there’s even a symbolic scene of baptism. In fact, it may be said that the heroine undergoes two baptism. First, there’s a symbolic baptism of her own tears. Later, there’s a baptism of real water.

That said, GRAVITY could use some more positive references to God or Christianity. It also has a fair amount of foul language, scary scenes set in outer space, and a few images of death in outer space. So, caution is advised, especially for younger children. Also, some sensitive viewers might get motion sickness from some of the movie’s situations, especially when the female astronaut is spinning out of control.

Despite these words of caution, GRAVITY certainly has “the right stuff” to be labeled an instant classic.