GUARDIANS OF THE GALAXY VOL. 2

"This Family is Messy" 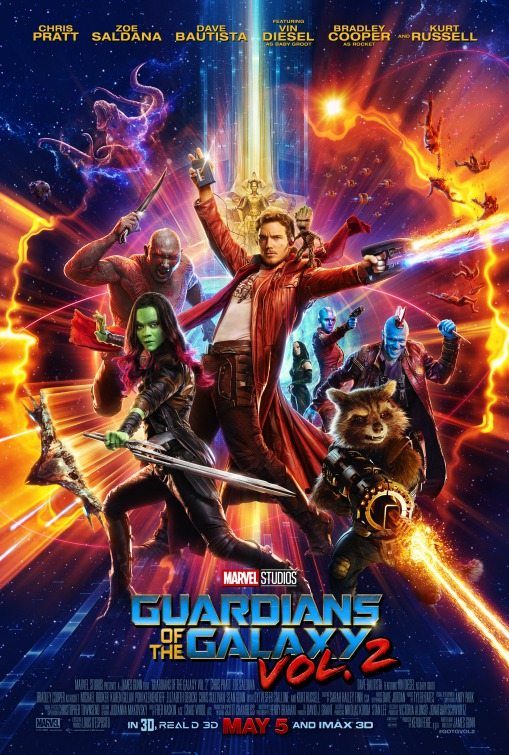 GUARDIANS OF THE GALAXY VOL. 2 is an often funny, mostly entertaining and exciting sequel that ramps up both the action and the objectionable content. Here, Peter Quill, “the Star-Lord,” and his ragtag misfits, the Guardians, must deal with family issues in the form of Peter’s biological father, Ego, whom he’s never met. Upon meeting Ego, Peter finds out his father is an ancient cosmic being who has the plan for Peter’s life – a plan to harm a lot of people. Peter and his team of Guardians must stop Ego before it’s too late. In the process, they learn more about what family truly offers them.

The strengths in GUARDIANS OF THE GALAXY VOL. 2 are the interactions among the characters, which are witty and hilarious at times. However, Peter’s father, Ego, lacks proper motivation, and the pagan mythology surrounding his existence is too convoluted. While there are some Christian, moral themes of sacrifice, redemption and family, GUARDIANS OF THE GALAXY VOL. 2 sadly has more foul language, more violence and more off-color jokes in it, so extreme caution is advised.

(Pa, BB, CC, FR, LLL, VV, S, N, A, MM) Mixed pagan worldview with strong biblical values of redemption, sacrifice, family, the importance of being a good father, humility, and protecting the world as well as strong Christian elements of self-sacrifice and references to Hallelujah in a song titled “My Sweet Lord” (the original song blends Christian references to God with Hindu references to the Hindu god Krishna), but set in a false pagan mythology about the universe which relies on Greek mythological notions of overthrowing one’s father, and populated by grotesque characters, lawlessness, cruelty, theft, and murder (much of which is celebrated with humor and gleeful disregard for the value of life); 34 obscenities (including multiple uses of “s” and “b” words), four profanities, urination, vomiting, and several jokes about male sexual anatomy, sometimes with sexual connotations; lots of strong action violence with spaceship fights, hand to hand combat with punching, combat with heavy weaponry, a battle with a giant monster that ends in it being cut open from the inside out, a disturbing scene in which probably 50 men are killed with an arrow, played out in comedic effect, earth and other planets are threatened; no depicted sex, but multiple sexual references (some of which are just romantic references to unspoken attraction), a character is seen putting on his clothes in a robot brothel with robot scantily clad prostitutes, a light kiss, implications that a character has been impregnating women of various species for a very long time; upper male nudity; reference to drunkenness; no smoking or drug content; and, some vengeful moments, plus stealing and greed.

GUARDIANS OF THE GALAXY VOL. 2 is an often funny, and mostly entertaining, sequel that ramps up both action and some unfortunate objectionable content.

This sequel starts with Peter Quill/Star-Lord and his team of misfits defending valuable batteries for a gold covered people called the Sovereign. The Guardians consist of Peter, the assassin turned good Gamora, Drax the Destroyer who traded in his vengeful personality with humor, the tree humanoid Baby Groot, and the trigger happy Rocket Racoon. When Rocket steals some of the precious batteries from the Sovereign after their job is complete, the Sovereign’s warriors chase after the Guardians to kill them for their crime. After crash landing their spaceship due to serious damage, the Guardians are approached by man named Ego (Kurt Russell), who reveals himself to be Peter’s father (Peter was born on Earth to a human mother). Peter, Drax and Gamora decide to go with Ego to visit his planet and learn more about who Peter truly is.

Meanwhile, the Ravager criminal Yondu, who abducted Peter from Earth as a child and reared him faces problems when his own ship has a mutiny he’s overthrown and imprisoned. Fortunately, before the mutiny, Groot and Rocket were captured as well, so the three of them plan a way to escape, which ultimately ends with a lot of dead bodies.

(Spoilers) Back at Ego’s planet, Peter finds out that his father is actually an ancient and immortal being that can manipulate molecules and literally create life. Ego’s planet is his own creation, and it’s all powered by a mysterious light at the center of the beautiful planet that feeds life into all of Ego’s creation, as well as Ego himself. As long the light is still there, Ego has power. At first, Ego’s intentions seem to be that of a father wanting to reunite with his son, and Peter is more than eager to have a decent father figure in his life. However, Drax and Gamora suspect something darker at play. It’s revealed that Ego’s ultimate plan is to destroy civilization and replace it with creations of his own, but he needs Peter’s help, because of the power that he wields being his son. Once Peter discovers this sinister plan, he knows that the Guardians must stop his father.

The strengths in GUARDIANS OF THE GALAXY VOL. 2 are the movie’s character interactions, which are witty and quite hilarious in moments. Baby Groot and Drax steal the movie as the most likable characters. The other Guardians are well rounded and emotionally motivated, though each character arc is worn on the sleeve a bit too much. Peter’s longing for a father, and Gamora’s reconciliation with her very troubled sister, Nebula, offer some surprising emotional moments to this fairly campy movie. It’s ultimately a more satisfying movie than the first because of the humor and improved characters.

That said, one major issue that diminishes the quality of the story is the lack of proper motivation for Ego, Peter’s father. Ego’s characteristics and maniacal plan seem at odds with each other and are never fully fleshed out. Also, the mythology surrounding Ego’s existence is quite convoluted and not well thought out. It’s a cosmic plot hole that many will likely overlook, however.

Thematically, GUARDIANS OF THE GALAXY VOL. 2 is a mixed bag. The mythology of the world is strongly pagan, though it should be noted that when Ego is asked if he’s a god, he responds, “yes, but with a lower case ‘g.’ Sadly, with the inclusion of DOCTOR STRANGE, Disney’s Marvel Cinematic Universe has already committed to including pagan spiritism as part of the makeup of the universe they’re creating. Also, some of the protagonists, like Rocket, the genetically modified raccoon, still revel in lawlessness.

The movie’s not all bad, however. There are very strong Christian, biblical themes of redemption, sacrifice, family, the importance of being a good father, humility, and protecting the world. The movie also includes the “Hallelujah” lyrics in the George Harrison song “My Sweet Lord,” although other parts of that song refer to Krishna, the Hindu god.

Ultimately however, GUARDIANS OF THE GALXY VOL. 2 significantly increases the amount of foul language from the first movie, with multiple “s” words and “b” words. There’s also too much violence, some of which is almost celebrated, along with too many sexual references to male anatomy. This makes VOL. 2 completely unacceptable for younger viewers, so extreme caution is advised.

Watch GUARDIANS OF THE GALAXY VOL. 2: