GUARDIANS OF THE GALAXY

"A Little Good, A Little Bad, and Some of Both" 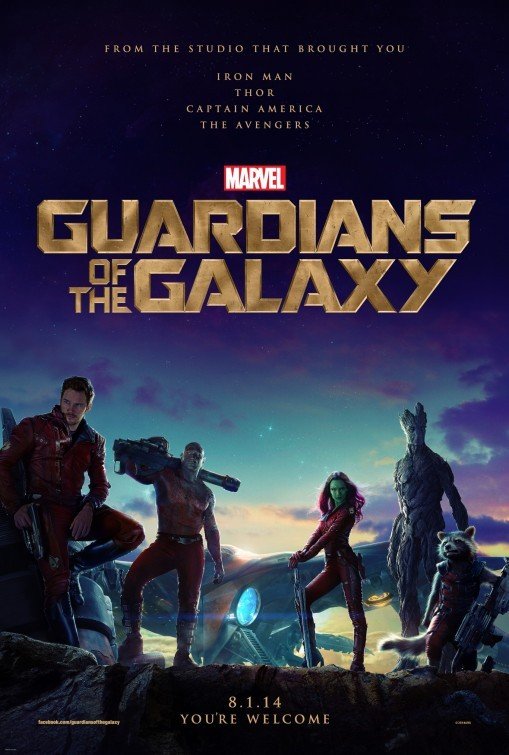 GUARDIANS OF THE GALAXY is a superhero movie about Peter Quill. As a child, Peter was taken from earth and brought to a new galaxy with strange people, aliens and creatures. Raised to be a thief, Peter gains possession of a mysterious orb coveted by Ronan, an evil alien wanting to use its power to destroy the galaxy and the billions of people there. Circumstances bring Peter together with five other misfits. Together, they decide to protect the galaxy from destruction.

GUARDIANS OF THE GALAXY has its good aspects, but it’s a step down in terms of storytelling. The middle act sometimes seems slow, and the ending has two or three climaxes. That said, there are many enjoyable moments and multiple redemptive, morally uplifting messages such as selflessness, teamwork, sacrifice, becoming a more moral person, a message against revenge, and even some Christian symbolism regarding the main hero. However, the movie’s gritty characters use coarse language and there’s intense action violence. So, GUARDIANS OF THE GALAXY isn’t as family friendly as it should be. Strong or even extreme caution is advised.

(CCC, BB, Pa, LL, VV, S, N, AA, M) Very strong Christian, redemptive worldview with strong moral elements with messages extolling selflessness, teamwork, sacrifice, becoming a better person, helping others, standing up to a would-be mass murderer to protect innocent people and the whole galaxy, and an anti-vengeance theme, also including two redemptive references to heaven and angels, the song “Spirit in the Sky” (the 1970s anthem that overtly mentions Jesus in connection with the afterlife), and hero mirrors Jesus in some aspects, including his mysterious birth by a special father from far away, his connection to his beloved mother, sacrifice, he unites a small group of followers to take a stand against evil to save others, and a kind of resurrection, BUT marred by some clear pagan immorality in the lifestyles of the lawless characters that’s somewhat gratuitous and a little too much; 20 obscenities (plus character almost says the “f” word), four profanities, protagonist uses his middle finger, a few scatological references, and some sexual jokes; strong action violence, though much of it is campy or over-stylized, lots of fist fights, shooting of science fiction guns and tasers, character nearly drowns, a woman dies of cancer, numerous explosions with multiple deaths, though most are faceless aliens that are somewhat robotic, a powerful energy rips apart a young woman who seeks its power; the protagonist is a womanizer at the beginning, a woman walks out of his room in his spaceship once, and he discusses his promiscuity, plus there’s also some sexual/romantic tension between him and a female alien humanoid, but nothing happens; the evil bluish villain is seen naked from the rear end, some upper male nudity; alcohol use and drunkenness; no smoking or drug use; and, revenge but somewhat rebuked, some gambling, stealing, and some rude behavior.

GUARDIANS OF THE GALAXY is Marvel’s latest attempt of expanding their cinematic universe by introducing a set of new characters, in a new galaxy. The hero of the story isn’t always so heroic. In fact, he starts out as a thief. However, he has some redemptive, uplifting qualities that are revealed by the story’s end.

Peter Quill is a human who lives in a galaxy of odd aliens and creatures. Originally from earth, Peter was kidnapped from his home in the dead of night in 1988 when he was a young boy, right after his mother passed away due to cancer. Raised by a group of alien thieves and misfits, 20-some years after his abduction, Peter is a “junker” who finds and many times steals items of value for the black market. When he gets hold of a coveted and mysterious orb, he’s immediately targeted by the evil Ronan, who wants to use the orb and its power to obliterate the peaceful society of Xandar, and the entire galaxy with it.

With his wit and cleverness, Peter evades Ronan’s men for a brief bit, but Ronan’s master, Thanos (another villain who’ll appear in a future AVENGERS movie), sends his personal assassin Gamora to track down Peter. Trying to sell the orb, Peter is finally caught by Gamora on Xandar. To make things more complicated, a talking raccoon bounty hunter named Rocket and his tree-like humanoid accomplice, Groot, intervene in Peter and Gamora’s fight, so they can hand Peter over for reward money. Their fight is cut short when Galaxy’s military, Nova Corps, arrests all four of them.

Imprisoned, Rocket vows he can break out of any prison. Together, Peter, Gamora, Rocket, and the innocent looking Groot decide to team up, break out of prison and sell the orb still in Peter’s possession for an exuberant price. With the help of a new member, a physical brute named Drax who vowed to kill Ronan because he killed Drax’s family, the five successfully escape from prison.

However, when they try to sell the orb, Drax is overcome by vengeance and he reveals their location to Ronan so he can avenge his family. This mistake causes the team to lose possession of the orb and almost results in their death. Tempted to count their losses and get as far away as they can before Ronan destroys everything, the five criminals reluctantly decide they need to stand together and fight to avoid the deaths of billions of lives.

GUARDIANS OF THE GALAXY has its good aspects, but it’s a step down for Marvel in terms of storytelling. With a second act that borders on the somewhat boring side and an ending with two or three climaxes, the structure is flawed. The diverse characters are interesting and fun in their own way, but some people may feel there are too many characters to follow. While the special effects are excellent, many of the sets and costumes are quite campy. Also, the science fiction world the story is set in lacks a believability and normality that movies such as STAR WARS and STAR TREK have mastered.

Thankfully, Director/Writer James Gunn brings a lot of humor through character and music, most of it being clean rather than vulgar. There are also many exciting and entertaining moments that make this flawed movie very enjoyable and entertaining.

Following in suit of other recent Disney titles in making edgier movies, GUARDIANS sets out to tell a tale of five criminals who discover meaning by becoming heroes. The arc isn’t as strong as IRON MAN’s, but the message is commendable. However, the movie’s not packaged in a family friendly way like some people may think it is. In a passionate speech, Peter expresses that they’ve been given a chance to be selfless and to care for others. Enemies become friends, and friends become brothers. Peter also struggles with letting go of his mother, and it’s not till he becomes selfless that he feels he’s become the man his mother would admire. While the rage-filled Drax holds onto his vengeance, his thirst for revenge nearly kills them all at one point. This causes him to be remorseful. Eventually, by the movie’s end, there seems to be a strong Christian, redemptive worldview that includes two references to heaven and angels and a messianic hero with a mysterious background involving a powerful otherworldly father, a beloved mother and elements of sacrifice, redemption and resurrection.

Overall, however, GUARDIANS OF THE GALAXY is not family approved. These gritty character use coarse language and don’t always live moral lives. There are sexual allusions (though nothing shown, thankfully) and some intense action violence. Movieguide® advises strong and, for some, extreme caution for GUARDIANS OF THE GALAXY.