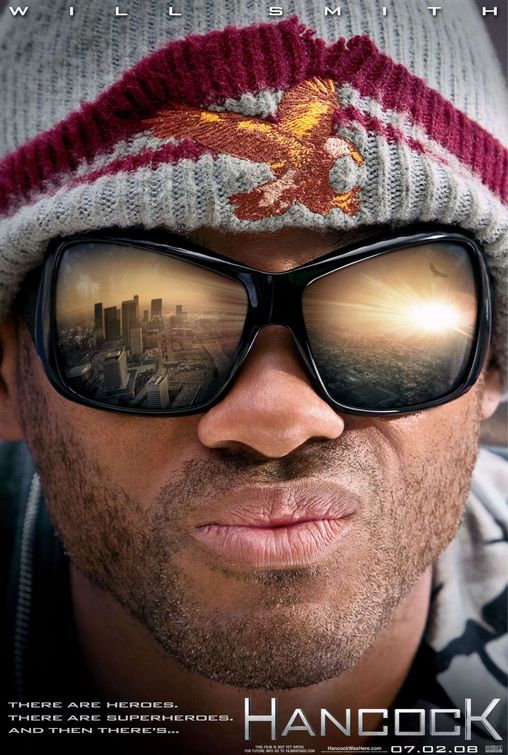 HANCOCK stars Will Smith as a drunken, mean superhero who wrecks the city while he’s stopping bad guys and saving lives. When he saves the life of a PR expert named Ray, Ray tries to help Hancock clean up his image, including going to jail for the damage he’s caused. When Hancock gets out of jail, however, the movie reveals that Ray’s wife, Mary, is also a superhuman being who was married to Hancock before Hancock lost his memory. Being together with Mary, however, causes Hancock to lose his powers. This proves to be a problem when a really bad guy shows up.

HANCOCK is a messy, poorly scripted, somewhat repulsive anti-hero comic book movie. Will Smith has made movies with pro-Christian content. HANCOCK has anti-Christian content. It not only seems to have Greek mythological roots, but also a smattering of Scientology. Obscene words are put into the mouths of children. Also, drunkenness, adultery and extreme, disgusting violence are justified. Anti-Christian movies usually don’t become very successful and that Scientology is so obvioiusly bogus that every movie made with that worldview has been a disaster.

(PaPaPa, B, AbAb, LLL, VVV, S, NN, AA, DD, MM) Weird, very strong, slightly mixed pagan worldview featuring ancient angels or gods who drink, curse, have physical relationships, and sometimes help people or do good and sometimes hurt people, with a strong anti-biblical, anti-design implication by implicitly condemning the design of the Creator; frequent foul language, some of it from the mouths of young children, includes 57 obscenities and two profanities; an extreme amount of violence includes jamming a man’s head up somebody’s rear end, cutting a man’s hand off and later cutting his other hand off, stabbing, shooting, beating, men and women fight viciously and hurting each other badly, man hurling pre-teenage boy into the air, man causes train wrecks and car wrecks, man threatens to hurt old woman, man crudely advises boy to kick the bully in the groin very hard, and much, much more; so-called gods or angels are passionately interested in each other, very mild bedroom scene; brief image of painting of nude buxom woman and low-cut costumes and dresses; alcohol use and overt drunkenness, man intentionally gets drunk; references to drug use in a prison; and, a strong problematic message that true love has to be abandoned because it hurts both parties, a strong message of adultery, dishonesty, and fraud.

HANCOCK is a messy, poorly scripted, somewhat repulsive anti-hero comic book science fiction story. In the movie, there are a couple of moments when it seems like there’s a story trying to be told, but those moments are fleeting.

The movie starts out with guns blazing in a chase scene in Los Angeles. Hancock sleeps on a sidewalk bench holding a bottle of whiskey. A little boy, maybe 8 or 9, tries to wake up Hancock to get him to stop the criminals. Hancock gruffly tells him to go away, the boy calls Hancock a foul word, and then Hancock threatens the boy. Hancock staggers to the chase, crashing into buildings, wrecking into cars and finally impaling the crooks on the tower on the roof of the famous Capitol Records Building at Hollywood and Vine. When Hancock lands, people are booing him and complaining that he’s caused several million dollars worth of damage.

Shortly thereafter, there’s a traffic jam on the train tracks in Los Angeles. Public Relations wannabe Ray, who only wants to do good, is on his cell phone and doesn’t notice the train hurtling toward him. Hancock arrives at the last moment, tosses Ray’s car in the air and causes another couple of millions of dollars of damage. People are swearing and cursing Hancock. Being the good guy, Ray tells Hancock he wants to help him change his image.

Hancock comes home with Ray for a spaghetti dinner, and Ray’s wife Mary seems unusually troubled by Hancock. Ray tells Hancock that the first thing Hancock should do is turn himself in to the police to pay for the damage he’s caused, clean up his act, and change his attitude and his clothes. (Evidently, Hancock has hundreds of warrants out for his arrest for the destruction of property and other crimes.) When he is in prison, crime will soar and the city will come crying for his help.

Hancock surrenders and quickly gets into a fight in the prison, which ends up with Hancock stuffing one man’s head into another man’s rear end. Slowly, however, Hancock changes. Then, when the police chief calls for his help, he has almost become a new man.

Mary and Ray take Hancock to dinner to celebrate. Ray gets drunk, and Hancock tries to kiss Mary. Suddenly, it’s revealed that Mary and Hancock are married gods who start to engage in a tremendous marital fight. Ray is heartbroken that his wife is already married.

Then, some of the criminals who Hancock put away escape. When Hancock tries to stop a robbery, he gets hurt. Evidently, when they’re together, they lose their superpowers. Mary tells him that he can’t remember what happened because the last time they were together, he lost his memory. However, they were both designed for each other and have been around since Ancient Persia at least. This time being close together, they almost die.

Will the bad guys win? Will Hancock and Mary become a couple and lose their superpowers? What will happen to Ray and their son? Don’t bother to see the movie and find out the ending because all the ending says is that people who are designed for each other should have nothing to do with each other, which means that the Designer made a mistake.

Will Smith has done a lot of movies with pro-Christian content. HANCOCK has anti-Christian content. In fact, it seems to have not only Greek mythological roots, but also seems to have a smattering of Scientology. Newspaper reports claim that Smith was being rushed hard to convert to Scientology by stars such as Tom Cruise. Scientology is so obviously bogus that every movie made with a Scientology worldview has been a disaster, such as the John Travolta’s bomb BATTLEFIELD EARTH based on L. Ron Hubbard’s shallow sci-fi novel.

Besides renouncing true love, this movie has several plot holes and goes in too many directions. Obscene words are put into the mouths of young children. Drunkenness, lying, adultery, extreme violence, and disgusting violence are all justified. Even nice Ray turns into an ax murderer. Nothing could be more depressing.

The special effects are very good. The music is serviceable. The acting is mediocre. And, the direction is spotty. One can only wonder why anyone would make this movie, especially Will Smith.